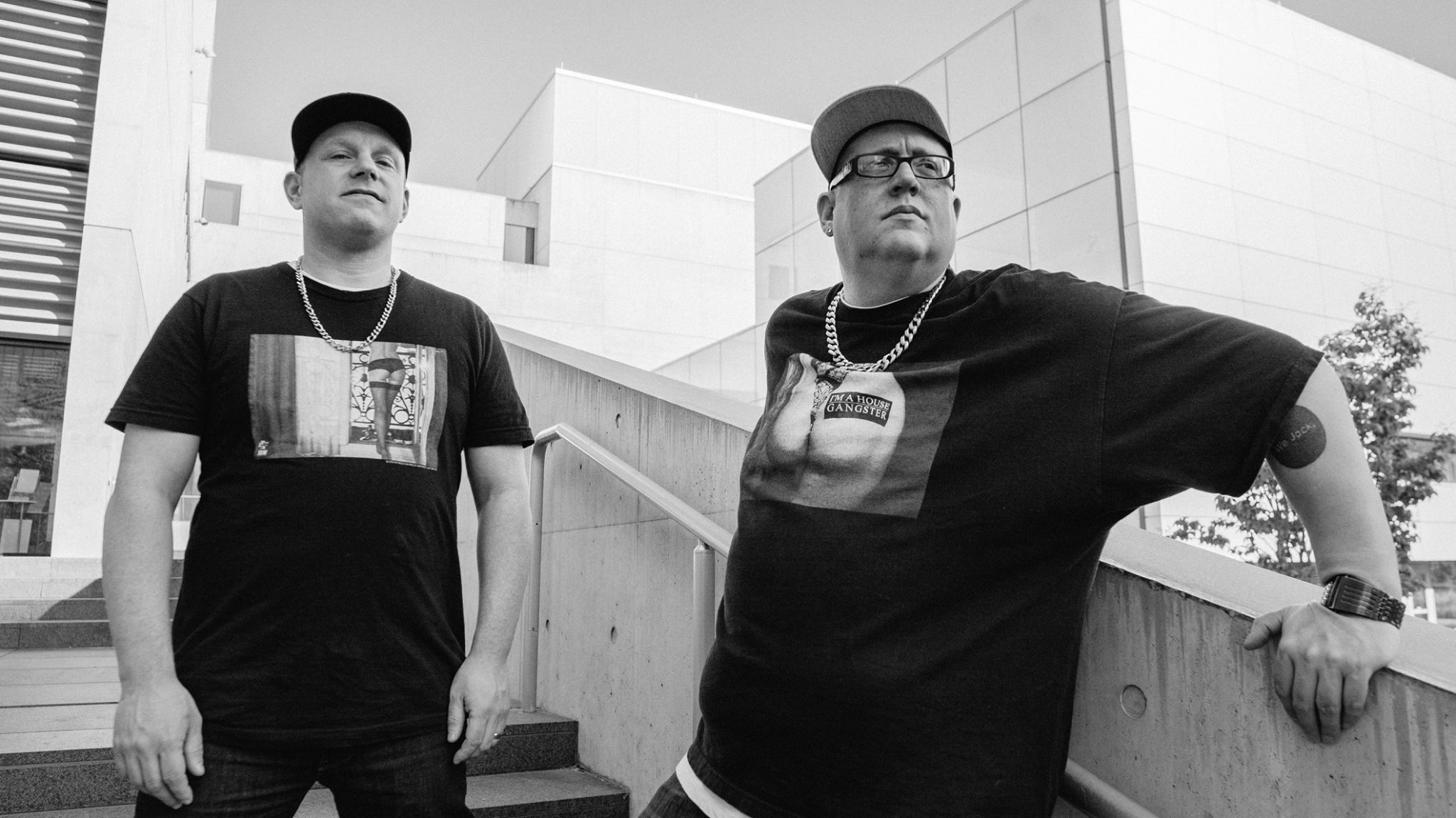 Your EDM Interview: Gettoblaster Are Bringing Back The Old School

Meet Gettoblaster, a dynamic force in tech house on a mission to bring music back to the basics — and believe us, there are no two better producers up for the challenge!

More than just a DJ duo, these guys are a set of tastemakers leading a movement, raised by the underground and determined to keep it alive. Heavily influenced by the sounds of Chicago and Detroit, Gettoblaster throw it back to the fundamentals, to what made dance music so damn good in the first place. When you listen to their records, you’re hearing an entire spectrum of what these guys have experienced over the past 20 years.

Paul Anthony honed his DJ skills whist growing up in the bustling Chicago house scene, meanwhile Zach Bletz thrived in the sweaty Detroit underground where he first fell in love with techno. Their passion for music aligned and a friendship boomed when Zach caught the house bug and wound up at one of Paul’s shows.

After years of pursing careers in dance music, they felt their individual projects become stagnant. Paul and Zach both craved change and it wasn’t until the longtime friends went for a fateful stroll around a lake, smoking a joint, that they landed on the idea for Gettoblaster. This is where the real story begins.

I’ll let them take it from here…

Paul: Gettoblaster is an interesting angle because I feel like we were just kinda tired of doing all the same things we were doing originally. We were both doing our own thing separately under our own names. At one point we were original with all of it, but after a while — after having 200 singles out and hitting the top 100 like 160 times — I was like, this isn’t going anywhere. It’s redundant. I needed change. And, since I’d learned to produce I’d never made the music that originally interested me to produce.

We went for a walk around some lake, smoking a joint like — “Bro, let’s do something new.” And we’re having the conversation — “What do you think about getting back to house and techno?” The type of music we first originally fell in love with, rather than chasing something else.

I started when I was a kid in ’89. Started listening to house music in ’85. It was maybe invented in ’83. So I had bought turntables within the decade that it was invented. Growing up and after high school, working at record stores — people like DJ Sneak and Green Velvet would regularly come to buy their records when they were playing their first gigs. Then, here I am trying to compete with the next 17-year-old electro artist when I’m from the city that fucking created house music — why am I not doing house music? At that point I was like, let’s get back to what we were initially into.

Zach: For myself, I first started going to warehouse parties in Detroit in ’99. It was techno, techno, techno — which I fell in love with. It was so much fun to go to a warehouse with sweat on the walls. And, nobody cared. They didn’t care what the place looked like — they were just there for the music. I started to go to Chicago more to see the DJs and the blend of house and techno just touched me.

Another big thing about Gettoblaster is our friendship. We’ve been friends for a really long time and it’s awesome working with your best friend.

Paul: We finish each other’s sentences.

Who were your earliest inspirations?

Paul: My earliest were Farley “Jackmaster” Funk and Bad Boy Bill which is beyond incredible because our first Gettoblaster album featured them both. I don’t know a lot of people who can say — those guys inspired me — and now they’re on my albums. That’s crazy to me. To me, “making it” is being in the same studio as the guys who inspired me to make this music and they care about my opinion. That blows my mind.

Zach: For myself, it was Stacey Pullen, Jeff Mills, a lot of the techno guys. Then, house for me was Derrick Carter, Bad Boy Bill, Farley “Jackmaster” and yeah, now we work with those guys it’s crazy.

What’s your most memorable moment together?

Zach: The most interesting ones I don’t know if I necessarily want to say… [laughs]

Paul: One was when we went to the Dirtybird West Coast Campout. We went with Deeon. J Phlip was late to the shuttle bus and DJ Deeon was playing and he was like, “Dude, I’m done.” So, me and Zach actually got to jump on and play unofficially, and next thing I know I’m busting a scratch and who was standing behind us?

Paul: I get goosebumps talking about it.

You guys have a never-ending, steady flow of releases… What goes on when you get into the studio?

Zach: This guy’s an evil genius that’s all I can say. [laughs]

Paul: Whatever I feel like writing, it comes out and sometimes it’s releasable and sometimes it’s not. I looked at my hard drive the other day and he about shit his pants — I have 4,000 unreleased tracks that are completed, mastered and releasable with tons of different collaborations. When you’re collabing it goes way faster. The full process for a track I want to say is 4 hours, beginning to end, mastering, the whole nine yards. I’ll write the whole thing then I’ll hit a wall — then Zach or whoever I’m working with can just pick it up where I hit the wall. And, it’s like *bloop.* Or, he’ll start something and after hours become numb to it and I’ll come in with fresh ears and knock it out. When you work with someone, that process can go 10 times faster. Where you stack 14 tracks in a year, I’ll stack 14 tracks in a month. Fuck, I’ve stacked 14 tracks in a week before.

It’s funny… Our last album that came out, we had 36 tracks picked out and we were trying to narrow it down to 10, but we knew that wasn’t going to happen. [laughs] We narrowed it down to 20. Then, we went to Europe, played 10 shows and then were in a week long studio session in London. I looked at him and said, “Fuck our album. We’re mad inspired from this series of gigs. Let’s just write a whole new album.” In a week we knocked out 30 more tracks with huge collaborations with some real legends. We just scraped the other album and made a new one, but that’s what inspiration does for you.

Zach: We were sleeping in the studio!

Paul: They kicked us out of the studio like, “Go to your fucking hotel. You guys are sleeping on the floor and we have Sony here. We can’t have that.” We were just tired — we had been there for 48 hours! I needed a nap. I don’t want to walk 15 blocks for a 2-hour nap when everything is set up just how I want it. We got yelled at bad.

How do you stay inspired?

Paul: Bringing it back to what got me inspired. If that means go to a warehouse party, or going to Detroit…

Zach: Sometimes just playing a show does it.

Paul: Me and this guy will cancel our flights, get into a car, and just drive instead of taking our flights.

Zach: Exactly and that’s it, too. The long car rides together. We’re listening to music and mixes, and getting inspired together.

How did your label We Jack come to be?

Paul: I felt with the lack of Chicago-based labels, and even Detroit-based labels — there was not enough representing those cities. It’s a little tougher to sign our tracks because it is that gray area. Some people will get behind it, some people won’t. A lot of people will play it, but won’t sign it. The label is based around something that is missing out of those cities.

Growing up in Chicago, Underground Construction tracks, DJ International Records, International House Records, Relief Records, all these labels were a huge inspiration to our careers. Massive! I had all those records on all those labels — every single one. Actually, I had five of every one because I beat the shit out of my records and I worked at a record store and got them for cost. Point is, I had all these records — and now, nobody’s making this shit anymore and nobody’s putting them out at a rapid pace. So, coming up we’re going to have a record come out every week and it’s operation, flood the market. I don’t give a fuck. Buy our records or not, but they’re going to be out there.

What are your thoughts on the current state of EDM?

We ended up on a Martin Garrix playlist. Most people would be happy about that and I don’t know how to react. The point is — he, or his team — is picking a house track. Commercial artists will find the things they like and they’ll implement that into commercial music, and then that music will be reborn again in a different direction.

For the first time in a long time, the lines are truly blurred. Carl Cox plays our record, Diplo plays our record. Dash Berlin plays “Shawty Want Dat Cake.” This guy plays epic trance with confetti cannons, hands in the air shit. And, I’m like, “You’re playing house?” It fucked me up. That’s cool!

What does it mean for you to be representing Chicago house and Detroit techno like you are?

Zach: It means everything. It’s what we grew up on and it’s what we love. If we didn’t focus our energy on that we’d still be…

Paul: …selling out. There’s a distinct sound that these two cities are known for and we do a good job of putting them together in our sound, which is a little bit of both. We’re carrying a torch that should be carried.

Zach: I hope we bring attention back to where the sound came from. To what started it all. A lot of people sort of lose that, or they don’t know that, or they forgot about it for whatever reason.

Paul: It’s a sound that will never go away and I don’t think enough people make it. There’s not enough new, relevant music of this style. One thing we decided early on was, we want to recreate what happened in the early 80s. We want to take it back to the basics. Let’s simplify music and build it back.