Attentnion DnB Crew: Can’t Go to Let It Roll This Weekend? RAM, Viper and Technique Have You Covered With Massive Compilation Albums

If you’re a DnB fan and follow these sorts of things, it seems that the festival season in Europe keeps getting bigger and bigger every year, and none of the heads seems to complaining. One of the biggest indicators of just how big DnB festivals are getting is one of the seminal events in UK and EU DnB, Let It Roll. Stationed just outside of Prague in the Czech Republic, the bi-annual festival brings one of the largest proliferations of talent and labels of all the many festies in both the summer and winter seasons. Behold, this weekend’s lineup from August 2-4: 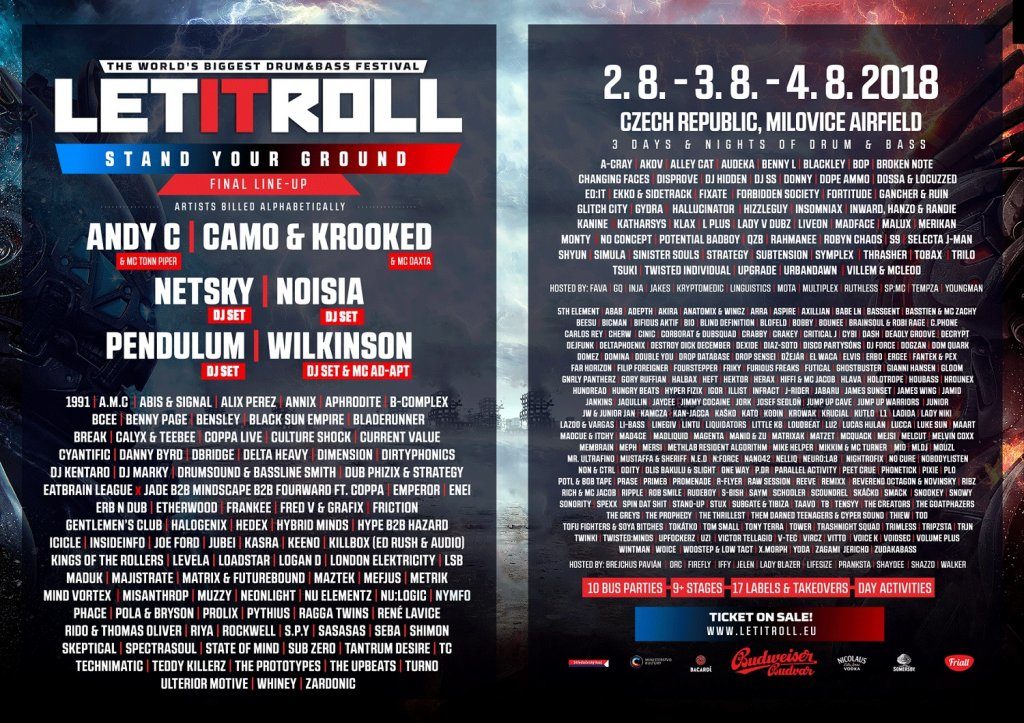 What this eye-crossingly beautiful lineup flyer doesn’t show is that thankfully the massive massive is split up into stages and block sets, many of which are run by certain labels. Unsurprisingly, RAM, Viper, and Technique all have stages which feature their own talent, as do Eatbrain (block set), Prspct vs. MethLab, Blackout and more. It’s truly a staggering event, now with a hype to match.

As more talent, labels, and fans are drafted for this momentous festival year, more labels have been doing special things for the run up to LIR. Special merch, promos, and contests are created by labels to promote their presence at the festival. This year MethLab uniquely held a “best mix” contest, the prize for which was a slot to play during their set with Prospkt at the actual festival. Pretty good.

Then there are the compilation albums. It seems each time LIR comes around, more labels jump on this bandwagon and put out some great music compilations just before the festival. Not just promoting themselves at the festival, these compilations this year from Viper, RAM, and Technique seem to be quite nice consolation prizes for those of us who were unable to take part in the mass DnB exodus to Prague. At least that’s what we’re telling ourselves.

Technique Goes to Let It Roll

This year Technique’s offering is an EP featuring its founders, Drumsound and Bassline Smith, Tantrum Desire, No Concept and L Plus. Released on July 24, this compilation is unique in that is features all new tracks from all four artists written specifically for LIR. Download on Beatport or listen here:

As the title states, this is RAM’s third compilation release corresponding to a LIR festival. A slightly longer LP, this comp features tons of RAM artists like Audio, Prolix, Hamilton, Legion, Lynx and Rene LaVice. Clearly the RAM stage will be one not to miss at the festival, and the same is true for this compilation. Catch it on Beatport or stream by hitting play below:

Viper Goes to Let It Roll

Last but certainly not least, Viper brings its summery, sultry vibes to Let It Roll, both festie and album. Viper’s done something really unique here by releasing its compilation album early on July 11, and with many names on it what DnB fans might not be as familiar with as usual. It’s a great platform to promote their new artists as well as give a voice to some producers who may not get a hearing at the festival or otherwise. That said, this one still packs a punch with Ekko & Sidetrack, MC Coppa and Franky Nuts. Check it out on the Soundcloud stream below or on Beatport.

Safe partying to all those heading out to LIR this weekend, enjoy the massive 174 pulse ripping through Prague. If you’re a weird non-planner and still thinking about going, tickets and info for Let It Roll can be found here.