Life of A Resident DJ, Your EDM Interview with Nick Ledesma

Ah, the life of a DJ. If you’re a fan of Martin Garrix, The Chainsmokers, Zedd, Tiesto, any number of top tier talents in the industry, you might follow their socials and be in awe of their lifestyle. Private jets, five star accommodations, travelling to all ends of the globe and playing in front of massive crowds… it all seems pretty amazing, right? However, the story of those DJs is not the story of every DJ. Every major city has tons of up and coming DJ and producer talent.

If you’re a regular club-goer here in Los Angeles, you’re probably familiar with any number of resident DJs at Exchange, Academy and Sound. We got the chance to sit down and chat with Exchange and Academy resident Nick Ledesma. Nick has opened and closed for such legendary acts as W&W, R3hab, Nicky Romero and Sander van Doorn among others here at local clubs. Nick talked to us about his life as a resident DJ here in Los Angeles, what got him into music, how he makes new music for sets, and some of his goals in the industry.

Tell me a little bit about your story, how did you wind up where you are here today as a resident DJ at Exchange?

“I started in the industry when I was around 13, working in a rock band, back in the day. So I had some success doing that, in that genre of music, pop-punk, so I was very influenced by Blink-182, Good Charlotte, Sum 41. When I was 18 I wanted to make a transition to a different genre of music, so that became electronic dance music. I started off producing off FL Studio, which I still do today. My first couple of productions were not the best, when I became a DJ, I started playing in the bar scene, I was playing in downtown Fullerton, around that area. And I realized if I just stay here and play music I’m not going to go anywhere. So I started taking my production a little more serious, I started playing at Avalon around that time, and when I turned 21, I started playing at the gallery downstairs here at Exchange. From then on, I just kept working on my production, finally got my first mainstage appearance three years ago. I think it was for Jay Hardaway and Elephante. That was probably my first opening stage gig, and my first closing gig was for R3hab back in January of 2017. Now I’m here today and I’m a resident DJ both here and at Academy. From this point on, I’m still working on a lot of music, basically future bass/progressive, a little mixture of it. You could say my music is a little bit between Seven Lions and Illenium and Marshmello and Slushii, it’s in the same boat.”

What’s your day-to-day work life here being a resident DJ?

“I do have a day job, I work Monday through Thursday doing human resources for the City of West Covina, I live in Azusa. So during the week I work from 7am-6pm, and then when I get home I work on music, sometimes until the morning, so I don’t get that much sleep. Luckily I have Fridays off, so I work on music all weekend long. That’s basically my weekly routine, so there’s no sleep when it comes to being in this industry. I’m not to the point that I can quit my day job yet, but it’s been a great couple of months that I’ve been getting more recognition in the industry.”

Did you always want to be in the music industry when you were growing up?

“So, I never saw myself in music, when I was in 7th grade, I literally had a crush on this girl who was in the 8th grade, and I heard she loved guitar players. So the next thing I did was buy this cheap-ass $80 guitar off eBay, an electric that came with a little tiny amp, the thing barely fucking worked. So once I got the guitar, I was like, so now what? So I literally learned two chords, G & C, wrote her the cheesiest song in the world, and I sang it to her, in 7th grade. She thought it was cute, sadly I didn’t get the girl. But, from that point on, it gave me a little push to learn more about playing guitar, and from there I got really good and wanted to learn piano. It’s such a beautiful instrument and you hear it in almost every song. Learning both those instruments helps me with my productions today. It’s so easy for me to just put out a melody on guitar or piano and plug it into my program. With my music I’m very melodic, so that’s important.”

Is that kind of song composition works for you, a melody and then you add electronic elements?

“Yeah, with my process, I’ll get the chords and put the melody out and from there I’ll layer it with some drums. And then I’ll kind of see how everything is and I’ll add more elements, a verse, a buildup, anything that consists of making a dance track, basically any song, it’s almost the same structure, just in a way where you’re using a lot of synths or other different elements that are used in dance music…when I do my melodies I make sure I have drop that grabs the people’s attention right away. We need to have that drop that hits you, where people are like oh my god!”

What have been some of the highlights you’ve experienced here at Exchange in your career as a resident DJ?

“There’s been a lot of moments where I can say wow, that show was amazing. But there’s also times where I’m like I could’ve done a lot better. One of my favorite nights was a couple of months ago, it was W&W, I opened and closed for them. My first 2-1/2 hour set, it was a little bit challenging at first. 2-1/2 hours is very long, I don’t think a lot of people who aren’t a DJ or producer know how long 2-1/2 hours playing for people is. I was so used to playing an hour when I started, then it became an hour-and-a-half, then at most two hours. It’s very challenging just to add 30 minutes and to keep people engaged for your music. Opening for acts is such an art, it’s not easy, it really takes a lot of time and focus to construct a perfect set. I think just being a resident here, being a closer is much easier than being an opener.”

What are some of the challenges you experience being an opener and a closer? How are they different from each other?

“As for being an opener, the challenge is to keep everyone engaged. People are just walking in, they’re trying to relax, you can’t play anything too crazy. You really have to find a nice tempo, a nice buildup, it’s a little slower, you slowly build it up and slowly go back down just before the headliner. As a closer your job is to keep those people from 2-3 o’clock in the morning. After they’re done with the headliner most of them just want to go home right? So your job is to keep heads staying at the venue, so you keep the energy of the headliner going. So in my experience, being an opener is much more challenging.”

What’s the next step you hope to take in your DJ/music production career?

“I’ve been very blessed to have opened for many DJs within the last couple of years. I’m hoping to finally make my mark on the festival scene. I’ve been working really hard and I have so much production that’s ready for people to hear. It’s going to be something people will enjoy and hopefully they can relate to my music.”

Check out some of Nick’s originals and remixes below and make sure to catch him when he’s playing alongside the industry’s best at Exchange LA and Academy LA.

If you want to catch Nick in action this weekend, he’s just been added as an opener for every night of the Alesso takeover at the Hollywood Palladium. Be sure to get there early! 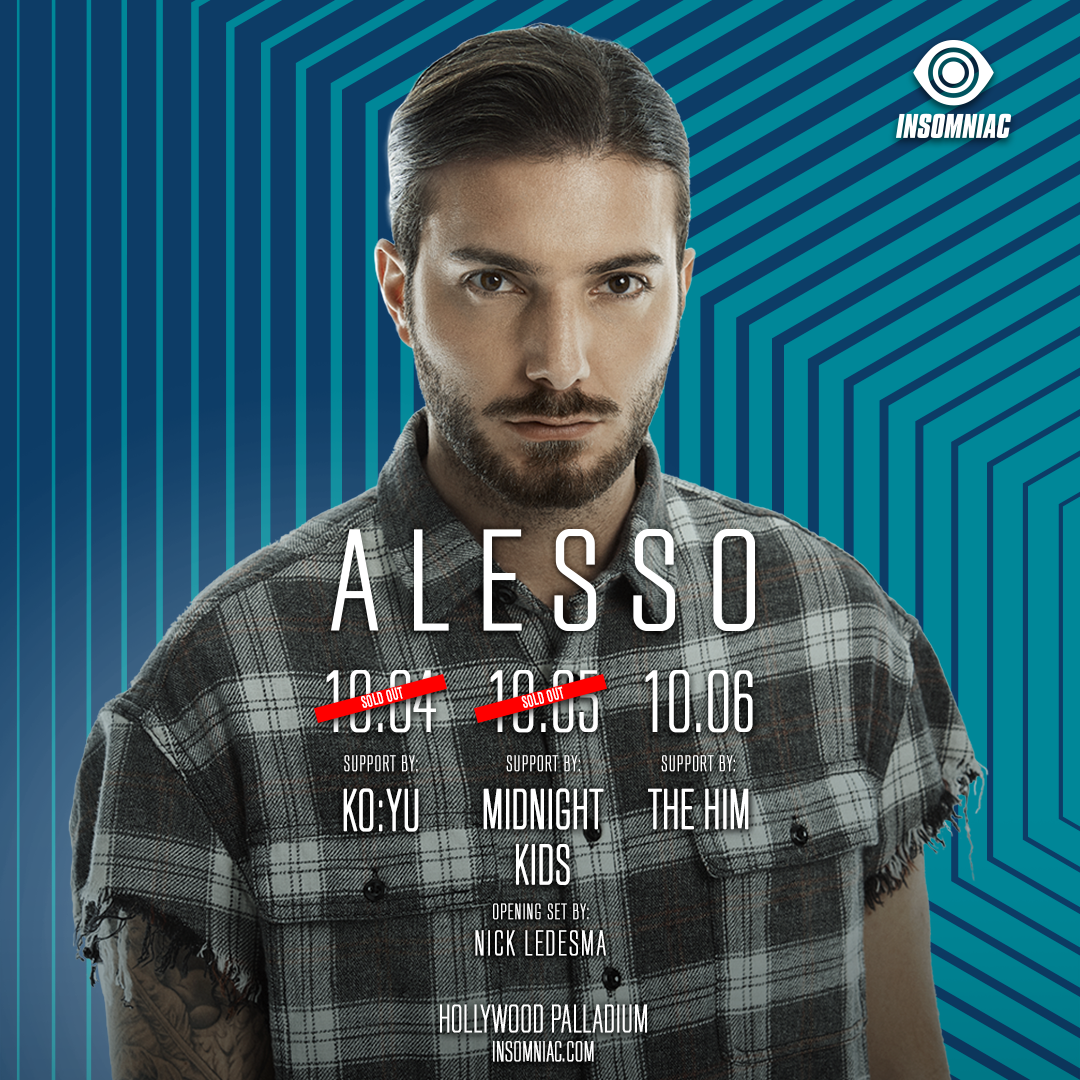 Your EDM Playlist: Rene LaVice Gives Us Some of His Favorite Remixes, Including His Latest of Jareth’s ‘Rings of Saturn’

Your EDM Playlist: Rene LaVice Gives Us Some of His Favorite Remixes, Including His Latest of Jareth's 'Rings of Saturn'