Dubstep producer and DJ Monxx has been catching a lot of flak from fans this year after cancelling multiple performances; delivery of his merchandise has also been delayed, though Monxx claims that was not ultimately his fault.

Still, his name has been dragged through the mud until we’ve finally come to this point: ‘monxxed‘ has officially been accepted as a term on Urban Dictionary (submitted by Taylor Drew), meaning: 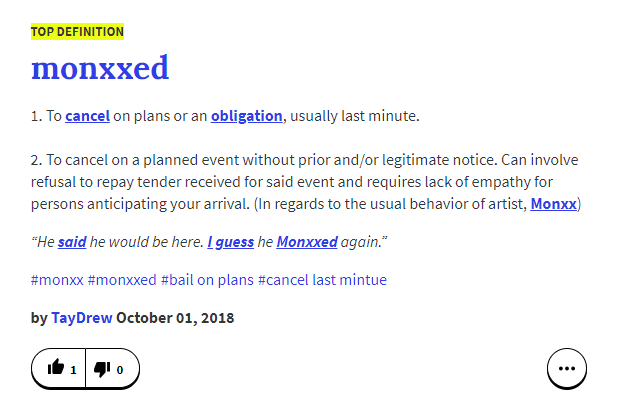 From a standpoint far away, this is absolutely hilarious, a valid “retaliation” against a DJ who has wasted fans’ time and money. From a much more critical standpoint, we’re approaching a dangerous level of cyberbullying.

If, as dance music fans, we’re really so concerned about the mental health of the DJs we admire, then this kind of behavior is a complete antithesis of that ethos. At some level, Monxx must be held personally responsible for his actions – or lack thereof – but at the same time, there’s been no support system laid down for him by fans, nor attempt to better understand the reasoning behind his cancellations.

At the end of the day, a DJ’s career is either made or broken by their fans. The way it is right now, Monxx is facing a steep decline and it’s going to take a lot of work to make it back up.