Deadmau5 Apologizes After Being Accused Of Making Transphobic Remarks on Twitter

Deadmau5 rarely has a filter on social media, and it’s earned him both praise from his biggest fans as well as criticism from some of his most staunch detractors. Yesterday, deadmau5 found himself in particularly turgid waters as various comments severely angered the LGBT community who accused him of transphobic remarks. See below: 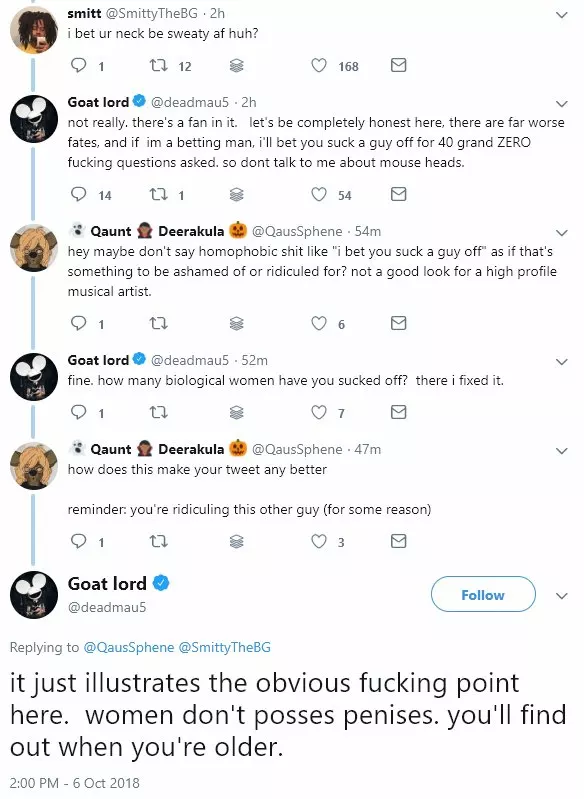 The various comments were accused of being both homophobic and transphobic. Though not explicitly “anti” any particular group, the comments represent ideologies that have become normalized in society, and are now being actively fought against by these groups who simply want inclusion.

i wasnt trying to make blatant transphobic statements, just got into a heated arguement with some dude online said something dumb and the internet took it way into somewhere unintended. I've since deleted the tweets, im not that kind of person. my apologies. https://t.co/eUJtjgmYAY

Thank you. I’m glad the tweets have been deleted, and that you’ve clarified how you feel. I’ve said stupid stuff, too. It’s what you do with it that matters.

It will mean a hell of a lot to my daughter to know you don’t feel this way.

Photo via Rukes.com | Screenshot via EDM.com

Over $40 Million In MDMA Found In Sausage-Making Machines