Your EDM Q&A: Zeke Beats Has a Message for the ‘Humanoid 2.0’

Just when people were getting used to the combined forces of Eprom and Alix Perez as Shades the super-metal and super-dark less-than-halftime outfit that rocked Bassrush Massive, Eprom decided to join forces with Zeke Beats. The Australian hard halftimer whose crazy beats and sub bass synths have been rocking Buygore, Dim Mak and Deadbeats this past year met Eprom on tour, the two clicked creatively and subsequently came out with one of the most interesting dual singles this year, Humanoid 2.0, out now on Noisia’s DIVISION imprint.

Inspired by the video game Berzerk, the “Humanoid 2.0” single has early video game-style vocal samples and it and its b side “Soundboy Funeral” are heavy beyond the comprehension of most bass music fans, with rattling sub bass making up the actual melodies. They’re also so slow that their sub bass style is sub-halftime, and an interesting study in what happens when bass is slowed down to a crawl so that listeners can really examine it. Spoiler: it’s awesome.

If that wasn’t enough, Eprom, Zeke and company decided to design an actual Humanoid 2.0 video game to go with the singles. Done in early 8bit style, it will remind gaming fans of old Nintendo games like Pitfall or Megaman. While it’s basic, the game is fun and has a lot of little touches like players can choose to be either Eprom or Zeke beats, the characters; voices sound like the guys and, most importantly, the music is an 8bit interpretation of “Humanoid 2.0” itself.

Beginning to end, Humanoid 2.0 is an interesting and innovative release which has made Zeke Beats a producer bass music fans should definitely keep an eye on. Your EDM sat down with him recently to talk super-slow bass music shop, to find out how he hooked up with Eprom and to learn what’s next for the Australian. Here’s what he came up with. Also make sure to scroll to the end of this article for the Humanoid 2.0 video game link.

Humanoid 2.0 is being seen as somewhat of a breakthrough release, but you’ve said it just began with a new voice-to-text app. How did it develop from there?

Zeke Beats: I was visiting Eprom at the time in Portland. We had gotten this new AudioUnit (Plogue ChipSpeech https://www.plogue.com/products/chipspeech.html). We started experimenting with all of the modulation parameters and characters you could choose. Eprom had his laptop plugged into his old hifi system at the kitchen table and began to work on a simple yet bass-heavy beat and the skeleton of Humanoid 2.0 was born in all its slimy glory.

How did the two of you come to work together in general?

We’ve been mates for quite some time. I originally supported Eprom in Perth, Western Australia on his first Australian tour, and a friendship was created. Since then whenever I would visit the U.S. I would usually jump in on sessions with him for the fun of it whilst learning a lot of neat techniques which he would show me!

You’ve said it took about two years for “Humanoid 2.0” and “Soundboy Funeral” to be released. Aside from the fact that you both have lots of other stuff going on, was there a production reason it took so long to get these two tracks to a place you both felt they were fit to be released?

We both knew this track was very special to us and we really just wanted it to come out properly, i.e. we wanted the artwork to have a certain look, we knew we wanted to do vinyl, digital and a video game. Division Recordings executed this perfectly and we both couldn’t be happier. The entire feel and aesthetic were captured precisely! 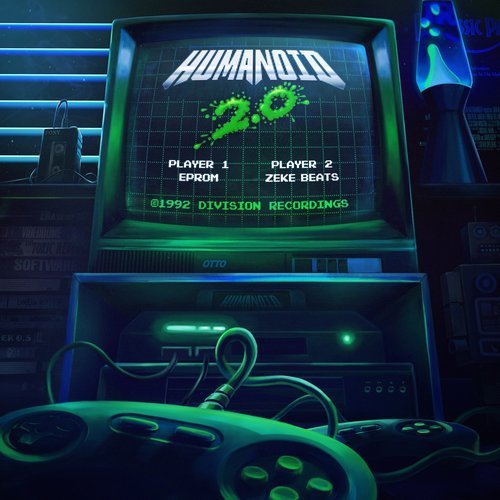 You both seem to be really into not just halftime but taking sub bass beats to about as slow as they can go lately, and this is definitely the case on “Soundboy Funeral.” What interests you both about slowing tempos down and how did you get to that level with these tracks?

Slower tracks with low bpm range give you much more space between transients, meaning that you can really push the sub frequencies without as many frequent interruptions from the kicks or snares. This isn’t the only reason why we decided to make it so slow, but we hope that our listeners are able to grasp a vision or story from the songs we create. The slow, morbid tempo of this song is a perfect fit for the feeling we wanted to portray.

DIVISION seems to be a great platform for halftime and sort of more experimental bass music, but what were your reasons for working with and releasing on this imprint for Humanoid 2.0?

We felt they were a perfect fit for the record to be released on. Thys from Noisia showed a lot of interest in this song when we first made it. The Gaslamp Killer dropped it (a release from DIVISION) at Noisia Invites in Amsterdam a couple years ago and that is how he came across it. Zeke and I have a lot of respect for Noisia and their team and we knew that they would meet the vision which we had for the release.

We must of course talk about the game. How did you guys decide to make Humanoid 2.0 into a game? Who helped you code and put it together?

I punted this one over to Eprom: When I was creating the screen graphics for the single artwork, I had the idea of doing it as a 16 bit game startup screen. The actual humanoid voice is generated by ChipSpeech, and in particular the Otto Mozer voice, a lovingly emulated version of an original design by Professor Forrest Mozer. This speech synthesis algorithm was made famous in the video game Berzerk, which features a vocal snippet that robotically intones the phrase “get the humanoid.” We extended this to create the vocal hook. So video games are at the center of the genesis of this song in the first place.

To us, it always made sense to make a game around the release. I approached my friend Alex Rehberg, (http://alexrehberg.com/) who works on the video game RUST, to write the code for a lightweight web/mobile game, and we began prototyping the infinite runner style game that you see now. The whole thing came together pretty rapidly, with Alex bashing out code on the Phaser platform and me generating the graphics and sound at the same time. We did it in a couple weekends.

How did you change/render the music for the game to make it sound a bit more early 90s video game-esque?

Eprom did the entire sound design for the game, which was made using Chipsounds and old video game samples. The Damage sounds of when the characters get hurt are our real voices. We basically just did a quick-and-dirty 8 bit version of the music by redoing the synths in chipsounds and changing some arrangements.

Do you plan to put more games together with more tracks as a series or is this just a one-off thing?

For now this is just a one-off type of thing. The whole process has been bery organic and we both like things to happen organically and unforced. Doing a video game was a ton of fun but also a lot of work.

What other releases do you have planned together, individually or with your other projects that you can talk about?

Quite a bit of stuff but nothing we can say at the moment.

How are you closing out the festival season? Any tours or shows coming up together or separately?

I have a ton of dates coming up as I’ll be touring with Space Jesus & Minnesota on their fall tours. See all the dates on my Facebook. Eprom and I will be playing a show together in Denver at Cervantes which is part of his 2018 tour.

Taylor Swift Speaks Publicly On Politics For The First Time Ever