It’s fine to take inspiration from other sources every once in a while — in fact, in a world where creating something wholly original is basically impossible and people are exposed to more media than they realize, making something similar to something else is pretty much inevitable. However, certain precautions have to be taken to make sure that inspiration doesn’t cross the line into straight up ripping a concept.

Apashe’s music video for “Majesty,” from his Requiem EP, is a drug-fueled journey following a main character and others riding horses in streetwear in the wilderness. Calvin Harris just released the music video for his collaboration with Rag ‘N’ Bone Man, “Giant.” And while the majority of the video is in an urban setting, the scenes depicting horses and wide open fields are very similar to Apashe’s video.

Really @CalvinHarris ? I know you’re getting old and unoriginal, but did you have to copy my music video?! That’s just fucking lame. pic.twitter.com/3kajjIa8Vj

Calvin responded to the call out, linking to a VICE article on the Dublin teenage horse thugs, “Check the ref from 2014 and stop insulting legends.” It’s unclear if he’s referring to himself as a legend here or the Dublin horse thugs. 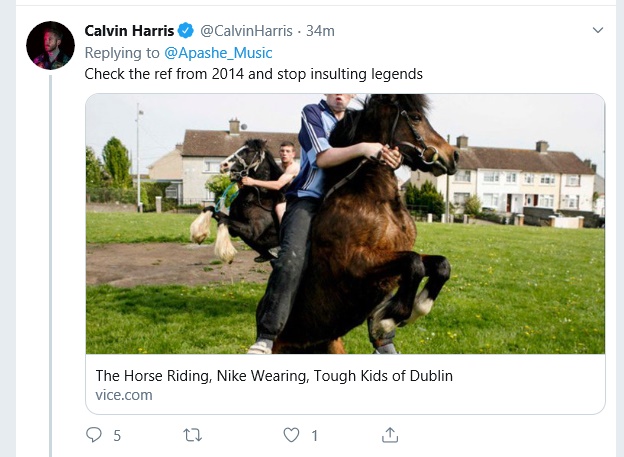 Regardless of any inspiration, the color schemes, camera angles/movement are all similar. Story is the same as mine (minus the humor), the nature scenery is identical AND different from the source you linked which has horses in towns. Not sure which legend you’re referring to 😉

Watch both videos below and see for yourself.