Sound check: Zach Velmer and Jeffrey Lerner from STS9 talk about the band’s past, present, and future

Sound Tribe Sector 9, more commonly known as STS9, began in Atlanta in 1996 in the midst of the rise of the mid-1990s “jam band” scene, but since their inception, there hasn’t been a category that fully encapsulated just what the band was about. And even though mixing a live band sound with electronic elements has become increasingly common on the festival scene, there still isn’t a band that is quite like STS9. When meeting up with the band I asked them about how they felt about the rise in having more live elements being introduced into EDM and if they felt like they were a big part of inspiring this wave.

“It seems as such.” replies a laughing Zach. “We feel grateful. A lot of our contemporaries from Pretty Lights, Bassnectar, The Glitch Mob and I think the list kind of goes on [have spoken about the inspiration STS9 had on their sound]. There’s a new artist every day saying kind of ’We do this because our first kind of gateway into this kind of world was STS9.’ So you know we feel very grateful and blessed to be a part of a movement.”

Movement, collection, tribe. These are the words that are used to describe the band. Throughout our interview they often refer to themselves as being a smaller part of a larger picture. The vision of STS9 and the way they see themselves and speak about their place in the world around them is very humble. Part of what has made this band almost impossible to categorize and definitely impossible to replicate is the band’s core belief of never categorizing themselves. While preparing for my interview, I came across the very first STS9 interview published. The interview (also with Zach and Jeffrey) was conducted by Bob Wiely after a show on Feb 26, 2000 and published by Surrender To The Flow magazine.

Bob Wiely: How do you feel about the term “Organic Techno” being used to describe your music?

Zach: I don’t think anything should really be labeled. I think it’s a good term in the fact that its not what we set out to do… but its kinda what has cosmically happened just through playing music and listening to the connection of it. I guess kinda organic techno, but I don’t know if I would use techno.

Jeffrey: It’s not bad, it doesn’t hurt me. It’s so much more then that… that’s just an element of it.

Bob Wiely: What would you label it?

Jeffrey: That’s hard, it’s different every night. Its true fusion I guess, without too many tags. It’s just whatever comes.

Zach: I have a hard time describing it. How would you describe it? It’s almost like classical music in the fact that we have songs that are 35 minutes long, like a lot of other “jam bands” and the fact that they are not so much jams but movements, understand? For example tonight we opened up with the second part of the last song. Everything is really interchangeable, like our song frequency. Labeling just turns me off. We read articles and people say just that “fusion, techno, blah blah blah¦” and we’ve not yet come up with what it is and can be instead of using other genres not that we are creating our own it’s like you have to go see it instead of just reading about it. We’re still working on our label I guess.

During our interview, as we began speaking about how their sound has been perceived and labeled over the years. Zach shared what he felt was the best description of their music ever told to him in an interview, “We still use this one to this day, if we’re talking retro. One of my favorite quotes from an interview was when an interviewer tried to explain [our sound] ‘Going to see STS9 is like driving down the road at a hundred miles an hour with your hair caught on fire.’ I can get that.”

And even though electronic music fans (perhaps more than fans of any other style of music) take pride in categorizing the music they are listening too and forming their own communities based on which of the genres they listen too, STS9 seems to be the exception to the rule.

Music isn’t the only medium in which STS9 has pushed the use of the available technology as it has evolved over the years. When it comes to the internet, the concept of social media and using technology to interact with their fans and help build connections amongst them STS9 was also way ahead of their time. Way before artist began using Facebook groups to create interactive fan clubs and even before MySpace was founded in 2003, STS9 used their website as a primitive social media platform. As early as 2000, STS9 fans could go to the band’s official webpage to connect with the tribe in a forum-like section of the webpage called: the Lowdown. 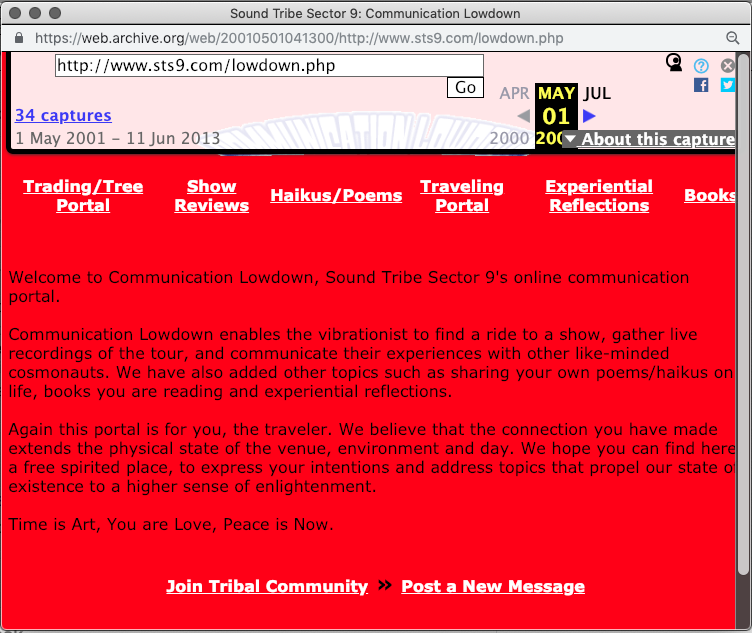 During my interview with Zach and Jeffrey, I set the intention of really reminding the band about the early days, get an idea of how they have changed throughout the years, and try to get a sneak-peak into how they may evolve in the future. Looking at the early editions of their website to now, one of the biggest changes seems to have come in the way the band presents itself to the world. As ahead of their time the band was, first glance of STS9’s website presents a lot of information and ideas that are fascinating and interesting, but ultimately distracting from the site’s role in promoting the band’s music.

Early on in the band’s career, STS9 was steadfast in presenting themselves as an artistic collective at the forefront of musical experimentation. The Mayan culture played a heavy part in the creation of this atmosphere. According to early editions of STS9’s website, the ancient Mayans thrived in the ninth sector of 13 in the middle of the Central American rain forest. While Europe was in the Dark Ages, the Mayan culture mapped the stars and calibrated harmonic frequencies to converge the Earth toward resonance. And it was this idea of harmonic frequencies that inspired Sound Tribe Sector 9.

A visit to the band’s official site today is a very different experience than it was in 2000. There are no references to the Mayan culture and perhaps more sadly, the Lowdown has been removed as well. When I asked Zach and Jeffrey about the links on their old site and if the Mayan’s still had a presence in their life and music, Zach and Jeffrey were both quick  to jump in on the somewhat touchy subject with Zach saying “I mean yeah,” as Jeffrey simultaneously said “In its own way.” Zach and Jeffrey both took turns sharing their thoughts on the real influence the Mayan philosophy had on the band, and why it has taken a smaller role as time has passed. Jeffrey said, “I think it became less cultural and more planetary. [In the beginning] it was kind of our gateway into just trying to understand [our place in the world]. That influence was a part of our youth, and expression, and is still part of us. Just not as overt.”

Zach adds, “Yeah, I think it [the Mayan influences to their site and music] kind of originated because of the lunar calendar. The concept, not even really a concept, but the feeling [of the Mayan culture] was that idea of being more harmonious with planet Earth. And just to expand on what Jeffrey was saying, at that time in our youth we were kind of bombarded with ‘time is money.’ From management to record labels, [Every conversation was] ‘money, money, money.’ And the concept of harmonious ‘time is art’ and ‘use your time just to make art, be creative, and be authentic in that way.’ I think that that was the biggest takeaway and some of the resonance that we had with that whole thing.”

Jeffrey continuing his thought adds, “And being introduced to Jose Arguelles [founder of Planet Art Network and the Foundation for the Law of Time], getting to know him, and to have his samples in Artifact. So to have that connection was great … Honest answer, it [the Mayan influences] became such a big thing about what people are talking about. I think for us it became ‘Time is Art’ and that was the big takeaway. We spend our time creating. And [while that] was a big inspiration, to be so labeled and with a cultural thing… I think we just kind of took that to a more personal level. We want people talking about the music, and when you’re an original authentic band it’s hard for people to understand.” In order to clarify things, the band has made a concerted effort to make sure the music is the main focus: of the official website, the live shows, and even the conversation. “We promote the Tribe as art – that’s the vision,” Zach says. “We’re more inspired than we’ve ever been. It’s like a river, and when it flow’s it really flows. And right now we’re flowing.”

One thing hasn’t changed over the band’s 20 years of making and performing music, and that is the emphasis on not only creating art but creating art as a family. As a tribe. The band held their first ever festival, Wave Spell Live, in the small northern California town of Belden last August. During a solo DJ session, Zach brought a very special surprise guest artist to the stage. His daughter, Isis.

When asked if she would be joining them in the future Zach gave the enthusiastic answer, “Absolutely! Yeah. We have a lot of plans. A lot of plans. A lot of fun things. My daughter is fierce. It was actually her idea. I’m just the vessel for her right. To support her in her aspirations. It’s insane. She’s six. And the reason she didn’t come down [for the Los Angeles show] is she’s auditioning for Alice in Wonderland. She has a voice lesson two times a week, and then she’s in this program called All About Theater and she wants to be the Queen of Hearts. That’s her goal. She’s fierce. We’re trying to raise a strong child.”

#WHOLESOME ❤ Isis Velmer stealing the show and hearts of everyone at Wave Spell Live. #STS9

In spite of the exciting prospects on bringing his little girl into the STS9 fold, Zach isn’t unaware of the influence festival culture has and foresees a time when her presence in the scene probably won’t always be as innocent as jumping onstage and jamming with her father’s band. During the interview, Zach was laughing and began to cover his eyes with his hands as if to block out a future mental image when saying “She’s gonna be the 18-year-old at the festivals. Naked, hula hooping and someone’s going to be saying ‘she has a father’. And I’ll have to say ‘that’s me.’” And while Zach may not be looking forward to that particular scenario, the main thing I took away from the anecdote was that STS9 plans to stick around, creating art, and sharing the vision of the tribe for many years to come.