Dillon Francis Working on ‘This Mixtape Is Fire 2’

Dillon Francis dropped his wildly popular This Mixtape Is Fire EP in 2015, a year after he dropped his debut album Money Sucks, Friends Rule. Containing collaborations with Calvin Harris, Skrillex, Kygo, Chromeo, and Bro Safari, along with a Party Favor remix, it remains one of Dillon’s strongest collections of tracks.

Now, following the release of his divisive sophomore album WUT WUT, it seems a sequel is in order.

“New music for This Mixtape Is Fire 2,” Dillon tweeted, in response to a fan question about a song on his Snap story. That was enough to send fans into a frenzy with dozens of tweet replies and a thread on Reddit. The tweet has since been deleted, but see it below. 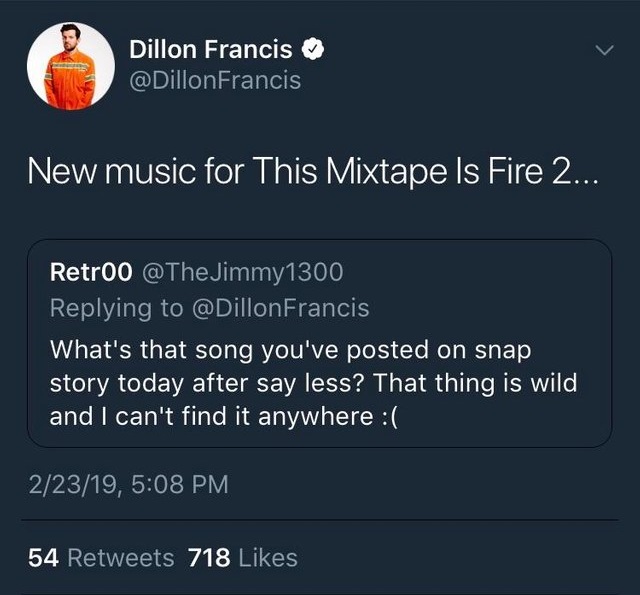 As if the tweet wasn’t enough, Dillon actually popped into the aforementioned Reddit thread and announced, “Back on my bullshit. Get Ready”

Comment from discussion Dillon Francis is currently working on This Mixtape Is Fire 2. A follow up to his 2015 EP.

That much is already clear with his newest single “EDM O’ CLOCK” released yesterday with TV Noise. Safe to say, 2019 is going to be a much different year release-wise for Dillon than 2018. Are you ready for it?