Disneyland might not be the first place people think of when they planning for a rave, but the parks have a deeper connection to EDM and rave culture than one might think. Every year there’s Raver Day at the Disneyland Park in Anaheim where passholders wear their best rave gear to the parks (and probably freak out the kids). There’s also the new night time show “Mickey’s Magic Mix” which portrays Mickey Mouse as a virtual DJ, involving a visual projection show EDC would be proud of and a Now That’s What I Call Rave Music-esque Disney soundtrack that could use the touch of actual DJ’s. Sorry Mickey. And no one should forget the brilliance that was Head Space, the Star Wars-themed album released by Hollywood Records, produced by an insanely talented group of DJs such as Kaskade, TroyBoi, Claude VonStroke, 3lau, and Bonobo.

However, if you want to attend an actual rave in the park you will have to travel to Disneyland Paris for Electroland.

For its third edition, taking place the July 5-7, 2019, Electroland takes you down the rabbit hole and into the jungle for a unique rave experience in the Walt Disney Studios Park. Those planning to attend can look forward to all the fun of magical universe of Disneyland Paris and its attractions while dancing to DJs such as Steve Aoki, Alesso, Armin Van Buuren, Nora En Pure, and The Magician while enjoying magical projections on The Twilight Zone Tower of Terror. See the full lineup for the upcoming rave at the Parisian house of the mouse below: 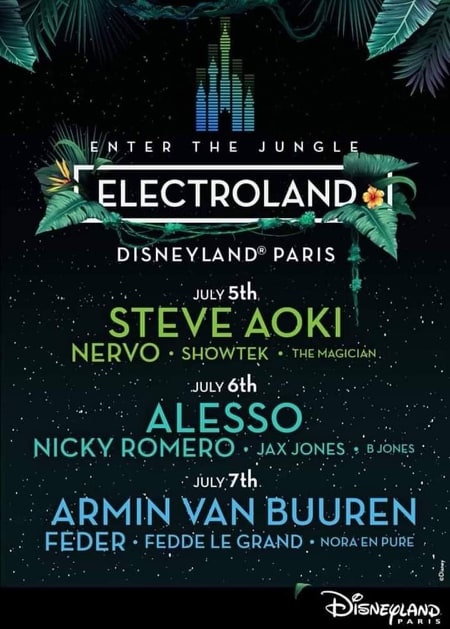 You can find tickets on the official site of Disneyland Paris. Not Paris ready? Can’t wait till July to get your Mickey Mouse on? Feel free to revisit what I feel is one of the best themed EDM albums of all time. I’m still hoping there’s a surprise performance of this album when Star Wars Land officially opens in Anaheim later this year. Even if that’s unlikely.