by Ashlee Burke
in EDM News

“There’s a little story in between all the songs. I feel like it’s kind of like 500 Days of Summer. It’s like if you’re watching that movie. Does it work out? Yes or No? Who knows. You’re in the journey and I think a big theme behind the album with the name “Everything Will Come Together” is trusting that it will work out the way that it’s meant to,” DJ/producer, Justin Jay, told Your EDM while discussing his upcoming double album releases.

Launching his music career from his USC dorm room, Justin Jay has a passion for not only creating music but for creating a party vibe on and off the stage that is just as infectious as his tunes. You never know what you are going to get with a Justin Jay set. It’s this unique style of DJing/performing that makes sound crews stay up at night and while the crowd falls even harder for the curly haired and ever smiling DJ on the decks.

“[Coachella] was really fun. I got to DJ and do some live stuff as well. I got to play at sunset and there were so many people there. I had so many friends on stage and in the crowd. My friends Benny Bridges and Andy Ammo joined me onstage. Andy plays the bongos and Benny plays guitar. They were hopping in and out I did it out and then the last 30 minutes of my set we played a bunch of songs off my new album together and yeah a little nervous but everything went really well. [Live shows are nerve racking] just making sure they are well rehearsed and stuff. With DJing you can kind of just go with the flow and feel it out and with live instruments, you got to practice your performance and I was super stoked with how it went. Also another thing that always is fun or challenging is the technical aspects of [a live set up] making sure the guitar works and the vocals sound okay, making sure everything’s plugged in and the sound guys are like ‘WHAT ARE YOU DOING.?’ and we’re like, ‘No, it’s gonna be fine. Don’t worry.’ It’s always the situation where they are like ‘We thought you were just a DJ.’ And I’m doing all this other stuff. I’m always trying to mix it up and have some fun.” 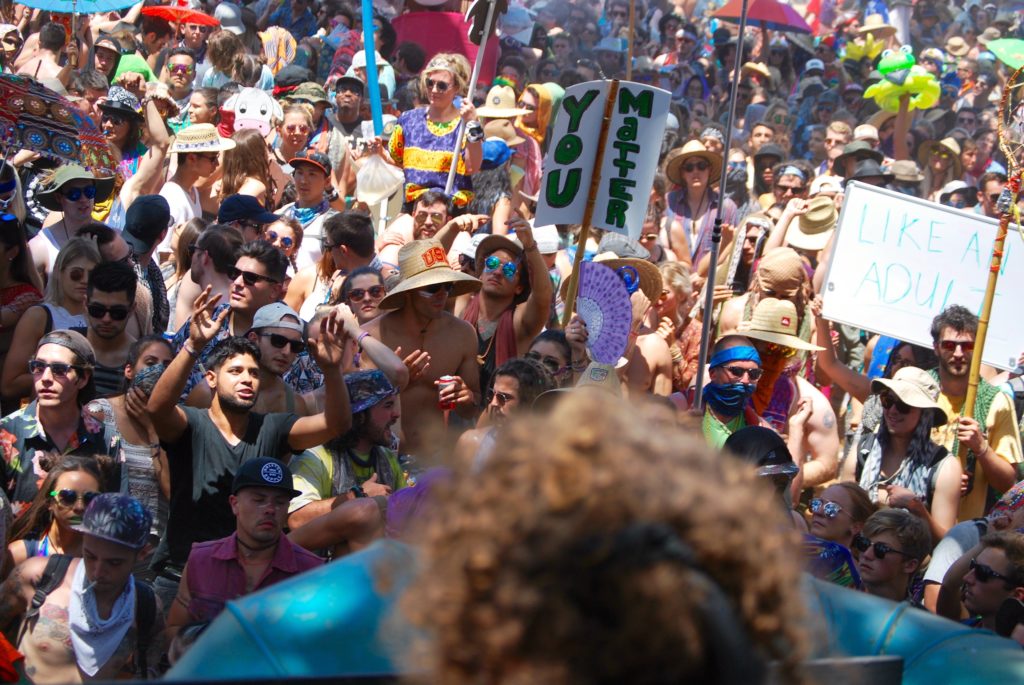 I have personally seen both sides of Justin Jay onstage, whether he is performing a live Fantastic Voyage set or DJing, every Justin Jay set is definitely fun. When asked if he had a preference between the two styles of performance, Jay was hard-pressed to pick stating, “I like as much stuff as possible. Although I do love just DJing as well. I think a lot of it has to do with what’s [the set up] going to be… what’s the place and what friends of mine are free to roll through. There’s a lot of nightclubs where the DJ booth is super tiny so you can’t even fit a second person in there. And there are other times, like the Do Lab [stage] that is so great because it’s a big stage and the homies can be onstage dancing. I love that. When the booth is a part of the party. But even just DJing by myself is super fun. I get to do things I wouldn’t normally do if I was with my homies. Both are really really really awesome.”

Aside from having his own successful label, Fantastic Voyages, Justin Jay is also s staple on Dirtybird Records and will be DJing a set at the upcoming landmark Dirtybird BBQ’s Los Angeles stop. When asked if it would be a live set or DJ set Justin Jay humbly responded, “At the moment, it’s just me.” Anyone who follows Justin knows that this is something that could always change, even if it happens the day of the show. As we went on to discuss Justin Jay’s history with Dirtybird BBQ and the upcoming Los Angeles event, he described why the event is special to him. “The Dirtybird BBQ’s are so much fun. Day party, food, music, and all my Dirtybird friends, it’s great. And last year was really special. [It] was the first year they did the BBQ in LA, [and it was held] at USC, which is where I went to college… and they lit the big torch in honor of Grillson and it was just this super profound moment. It was just a really great day, and I couldn’t be more excited about this next one.”

Fans of Justin Jay also have his upcoming album release to look forward to. “[The new record] is the first part of this big project. It’s like a double album. The first half of the double album drops next month. It’s called Everything Will Come Together. It’s been great. We’ve been putting out one song every month and we are four months in. Come May the first half of this double album is going to come out and a lot of it is really inspired by psychedelic rock and live music. I really wanted to learn how to play the guitar and I’m still learning but these are some of the first songs where I play the guitar. Benny Bridges helped me with some additional guitar. So if the guitar sounds crazy and hard to play it’s him. But it’s a good team effort. It was really fun to make and it’s kind of a snapshot of me like a year ago. Where I was. And the idea behind this whole album is… It sounds kind of silly, but it’s all about love. I feel like this first album is like… I don’t want to give spoilers, but take a listen to it. There’s a little story in between all the songs. I feel like it’s kind of like 500 Days of Summer. It’s like if you’re watching that movie. Does it work out? Yes or No… Who knows. You’re in the journey and I think a big theme behind the album with the name Everything Will Come Together is trusting that it will work out the way that it’s meant to. Which can mean, even at the end of 500 Days of Summer, even if they are just friends? That’s cool too. That’s the way it was meant to work. Letting go. And trusting that everything you need inside you’re gonna get it. And it’s going to come from within. I think a lot of the songs I was writing, [I wasn’t] really thinking about the big picture. I feel like things were happening, and music is so fun and awesome because if you are feeling something, whether it’s really great or really sad — either way making music just makes you feel better. It can make a sad moment a happy moment cause you just get it off your chest. Or if you’re happy, you can feel even happier. It’s simple but it [works]. Making music is the same as consuming it. Just the way it makes you feel. Love it.”

These are words that I took very much to heart, and I can’t wait to get to hear the new songs from not only this first release but also when the second half comes out (timing of which is unknown as of yet) and we find out the end to the story. For this first half I asked Justin which song was the most fun to play onstage, he said “One of the songs that I think is really fun is “She’s Afraid to Choose.” It’s really fun because the vocals I did are really silly. It’s really fun. The band that I make music with called Thumpasaurus. I wanted to sing the way the singer in Thumpasaurus sings and he yells in really funny ways and that song is super funky. There’s also a song where I cleared a sample from the California Honeydrops. They are a really cool New Orleans soul band. They are going to be featured on it. It’s a super fun song.”

The topic of vocals reminded me of something that I had always wondered. When I first started seeing Justin perform live and singing on the mic, I noticed that there were a lot of effects over the vocals. While it gave it a cool sound I was curious what the thought process was behind warping his vocals onstage. The question was received with a laugh, “Part of the reason why I was doing all that stuff was that I had never sang before and my singing was really bad. But then [overtime I would sing and] people were like ‘Wow. That’s the right note.’ So this album there are actually a lot more like naturally sounding vocal moments. I think there’s still a handful of like robot kind of voices. Which I just love that sort of vibe. I’m a big Daft Punk fan. This one, there’s more of a range.”

If you can’t make it out to the BBQ in Los Angeles, you will have a chance to catch Justin Jay at a handful of the Fantastic Voyage shows he has lined up across the US in upcoming months. The last thing we spoke about was the possibility of another Fantastic Voyage house party in LA (they just need a new house!), and any upcoming plans he has for a tour. He said, “One thing I’m pretty excited for is after the album comes out we are going to do a full band tour. It’s going to be really fun. Our whole Fantastic Voyage crew is going to play as a band and a lot of the guys in the band are focusing on their own projects so DJ sets from Benny Bridges and Danny Goliger and Sam von Horn. It should be a really fun summer. Hopefully, a lot of the shows we do this summer will be like a mini version of what we did at [Dirtybird] Campout. Different homies going on and off the stage.

Woodstock 50 Back On? Michael Lang In Talks with New Investors