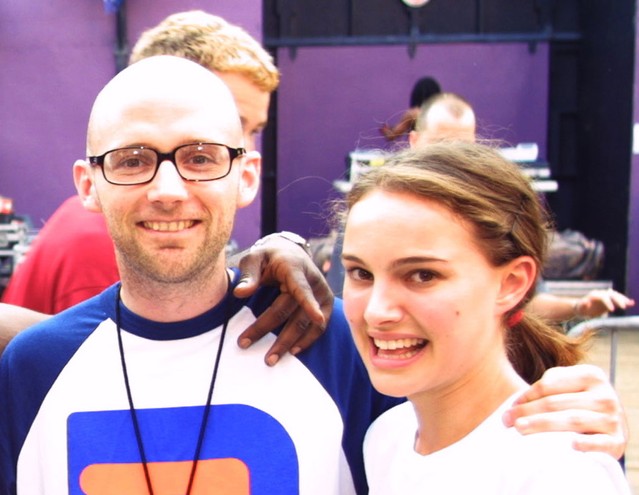 Moby’s second memoir, Then It Fell Apart, came out earlier this month, on May 7. Within the book, described as “a classic about the banality of fame, […] shocking, riotously entertaining, extreme, and unforgiving,” Moby recounts various encounters and experiences in his life as a touring artist and romantic.

Apart from stories of a tryst with Lana Del Rey, back then still going by her given name Lizzy Grant, Moby also tells of a brief time dating Natalie Portman while she was attending Harvard. At least, Moby would like to believe they were dating…

According to Portman, who spoke with Harper’s Bazaar about the passage, it was closer to “an older man who was interested in me in a way that felt inappropriate.”

“I was surprised to hear that he characterised the very short time that I knew him as dating because my recollection is a much older man being creepy with me when I just had graduated high school,” Portman told Harper’s. “He said I was 20; I definitely wasn’t. I was a teenager. I had just turned 18. There was no fact checking from him or his publisher – it almost feels deliberate. That he used this story to sell his book was very disturbing to me. It wasn’t the case. There are many factual errors and inventions. I would have liked him or his publisher to reach out to fact check.”

She continues, “I was a fan and went to one of his shows when I had just graduated. When we met after the show, he said, ‘let’s be friends’. He was on tour and I was working, shooting a film, so we only hung out a handful of times before I realized that this was an older man who was interested in me in a way that felt inappropriate.”

Moby’s telling of the story is… different. According to him, the two began dating soon after they met backstage at a concert in Austin in 1999. That would make Portman 18 years old, confirming her story, rather than 20 years old, which is what Moby recalls. They attended the MTV VMAs together, and he visited her occasionally at Harvard. “At midnight she brought me to her dorm room and we lay down next to each other on her small bed,” he wrote of one such encounter. “After she fell asleep I carefully extracted myself from her arms and took a taxi back to my hotel.”

I recently read a gossip piece wherein Natalie Portman said that we’d never dated. This confused me, as we did, in fact, date. And after briefly dating in 1999 we remained friends for years. I like Natalie, and I respect her intelligence and activism. But, to be honest, I can’t figure out why she would actively misrepresent the truth about our (albeit brief) involvement. The story as laid out in my book Then It Fell Apart is accurate, with lots of corroborating photo evidence, etc.
Thanks,
Moby

Ps I completely respect Natalie’s possible regret in dating me (to be fair, I would probably regret dating me, too), but it doesn’t alter the actual facts of our brief romantic history.