Living in Los Angeles, personally, I like to consider myself spoiled. That being said, the rest of the country is recognizing that people want to see live EDM shows, and everyone is pouring big money into big speakers, bright lights, and the best talent that money can buy. Big Night Entertainment Group (BNEG), Boston’s preeminent
hospitality and nightlife company, is launching a new luxury club Mémoire nightclub at the forthcoming Encore Boston Harbor resort.

The luxury nightclub officially opens June 23 with R3HAB, but other acts during opening week are as good, if not better. Opening week will include shows from Steve Aoki, Don Diablo, Diesel aka Shaquille O’Neal, and more.

“We are beyond thrilled to introduce Mémoire and to be a part of the incredible Encore Boston Harbor project,” said BNEG Principal Randy Greenstein. “Mémoire will offer a high-energy nightlife destination within the five-star property, regularly welcoming top DJs and nightlife talent from around the world. At Mémoire we wanted the guest experience to be unlike anything else in Boston, blending the most state-of-the-art technology available with glamorous and sophisticated décor. The result is a space that’s really high energy and captivating while still offering that luxurious and VIP experience.”

BNEG previously renovated The Grand in Boston in 2017, regularly welcoming the world’s biggest DJs including Alesso, Steve Aoki, Kaskade and Hardwell, so you know they know their way around a talent offer. Mémoire is outfitted in the latest technology throughout, including a giant LED wall behind the DJ booth with captivating visuals, a Funktion One sound system, and a custom state-of-the-art LED chandelier showering the dance floor with a spectacular light show, visible on the spacious dancefloor and from the second floor mezzanine.

Mémoire will be one of 15 dining, lounge and casual food offerings located in the three-million square foot Encore Boston Harbor Resort. For more information, visit their website or follow on social media @MemoireBoston. 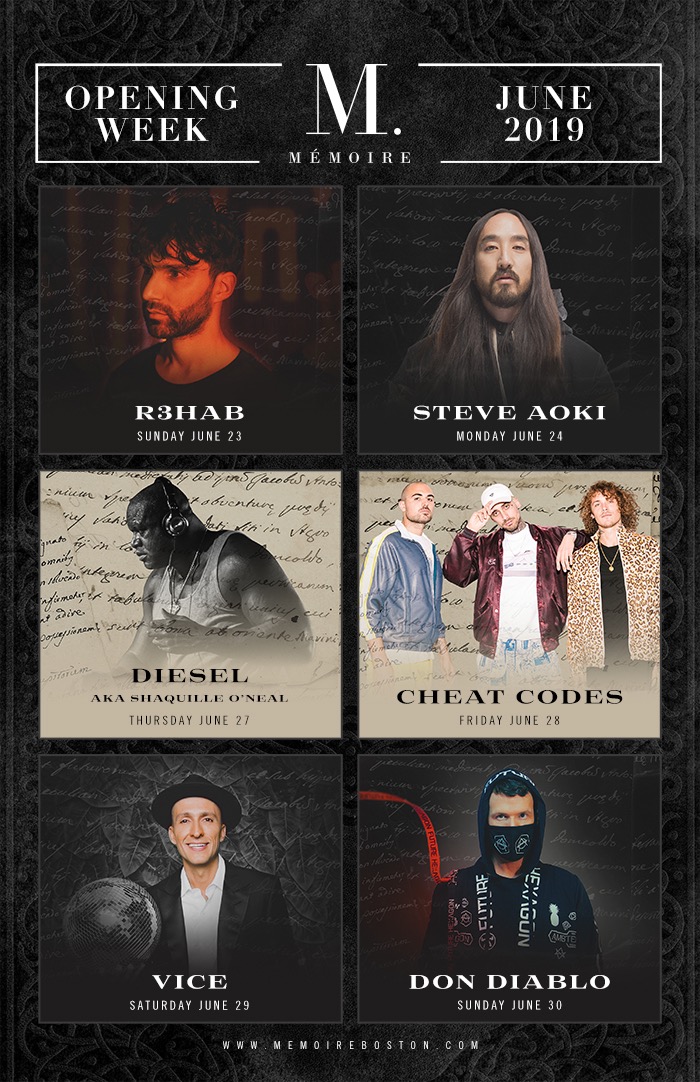