Imagine a carnival: rides, food stands, crowds of people, a bright sun. Now put that carnival in the dead of night. Then add in lights of all shapes and colors, of all sizes and proportions. Finally, add electronic dance music of all types. House, dubstep, hardstyle, trance, bass and everything in-between. Can you picture it? If so, you’re close to experiencing EDC Vegas.

EDC Vegas remains a flagship EDM music festival for many reasons. There’s nothing quite like it in the world, let alone in America. It takes place in mid-May at the Las Vegas Motor Speedway, a concrete oasis with no sound ordinances or time restrictions. Music runs from 6 p.m. to 6 a.m. for festival attendees. For campers at the fairly new Camp EDC, music runs 24 hours a day. It’s a spectacle like no other.

This year, EDC (short for Electric Daisy Carnival) grew with more attendees, more stages and more sights and sounds. Insomniac founder Pasquale Rotella comes from underground raves, and his maximalist vision flourishes for EDC’s brief but impactful three days. EDC has stages for all types of EDM: kineticFIELD for mainstream favorites, circuitGROUNDS for more heavy hitters, quantumVALLEY for trance, bassPOD for dubstep and weird bass, neonGARDEN for house and techno. Then there’s seemingly endless art cars for all sounds across the spectrum, played by up-and-comers and huge names with secret sets.

EDC champions its headliners over all else. No, not your Kaskades or Armin van Buurens of the world; although they’re important too. At the bottom of each EDC lineup, text reads “And the most important headliner of all…YOU.” Yes, you the attendee. This appreciation for EDC’s lifeblood could not be felt more during the weekend. Most people apologized if bumping into someone in a crowd…good luck finding that at another huge festival. Strangers met, chatted and formed lasting bonds. Relentless energy and permanent smiles could be felt and seen all hours of the days, and they were infectious.

Despite this, the actual talent on the bill is nothing to scoff at, in fact, it’s something to behold. Ever since its inception, EDC has always been where the cream of the DJ crop assemble every year, and this year boasted no shortage of talent. There are always some luminary acts who are there every year, or almost every year: Tiësto, Armin van Buuren, Eric Prydz and Above & Beyond, to name a few. They’re also some of the biggest names now in music such as Illenium, REZZ, Zhu and Chris Lake. It’s impossible to catch all the amazing talent over the course of the weekend, and it’s almost impossible to come up with a favorite performance too. However, we’ll try to highlight some of the best of the best.

EDC also shines bright beyond corporate influence. Sure, there’s still sponsors. In fact, one of the better smaller stages came in the form of Corona’s Electric Beach stage. Still, EDC shed the typical sellout moves from other huge festivals. None of the flagship stages were presented by sponsors. Heck, none of the smaller activations or art cars came with blatant corporate logos. It felt freeing to enjoy EDC without constantly being reminded of the real world. It compares well to Disney World in its ability to truly immerse attendees in another dimension, one mostly free of corporate sponsors. One filled with endless excitement and thrills.

The festival’s production is also second to none. It’s quite incredible how many stages, most close together, operated with minimal sound bleed. Seriously, small art cars played near huge stages like kineticFIELD, but somehow transported attendees into their own worlds. While sound bleed persisted if you were in the back of a stage or moving around the festival, the attention to sonic detail was a huge accomplishment.

Of course, EDC’s visual production is one of the festival’s biggest feats. Each stage dazzles attendees with an assault of bright LEDs, piercing lasers and flashing lights. CircuitGROUNDS, cosmicMEADOW, bassPOD and quantumVALLEY emerged as clear favorites. As impressive as kineticFIELD was, the stage’s limited LEDs made for a mild impression. Artists couldn’t bring their own visuals to the stage, so they had more limitations than artists at the other big stages. Ideally, a combination of the stage’s current art pieces and more LEDs would make for a truly awesome stage.

It feels like circuitGROUNDS was where a lot of the really compelling performances were going on. Unlike kineticFIELD this was the stage that allowed to artists to completely immerse headliners in their own unique visuals. On Friday night fans were treated to a special BLACKLIZT performance by ZHU, this is essentially his afterhours alias, and the production was dark and minimal for this rousing performance. The stage was adorned with white mannequins while the mysterious producer/singer/DJ spun into the night. After that was an astounding performance from the legendary Eric Prydz, he played a very progressive and energetic set, while his trademark visuals put the circuitGROUNDS crowd into a trance at times. Not a whole lot of IDs for this one, Eric took it back old school for the true fans.

Although, the award for best performance of Night 1 had to go to deadmau5, who took the packed crowd at cosmicMEADOW on a journey. Opening up with a testpilot mix, the crowd was left to contemplate the insane bass before the mau5 started tearing through early era hits. CosmicMEADOW was the perfect setting for the mau5’s one of a kind set, I don’t know what to tell you if you missed out on this one.

If you were fortunate enough to not be at either kineticFIELD or quantumVALLEY, then you were still able to enjoy the show. One of the largest crowds of the weekend had to have been at circuitGROUNDS for a surprise set from Skrillex. Yes, Sonny made a rare appearance at EDC and he did not disappoint the massive crowd that turned out to see him. Announced earlier in the day by both Skrillex and Pasquale Rotella, this was certainly a highlight of the weekend. Sonny was in that Dog Blood state of mind, as he kept the lighting low, and the effects relatively minimal, and there was plenty of bass house in the set. If you were hoping for old school Skrillex dropping nothing but dubstep, you might have been disappointed or underwhelmed. However, if you have more nuanced taste, you appreciate just how great and versatile this set was. I can’t wait to see what Skrillex has in store for all of us this year. 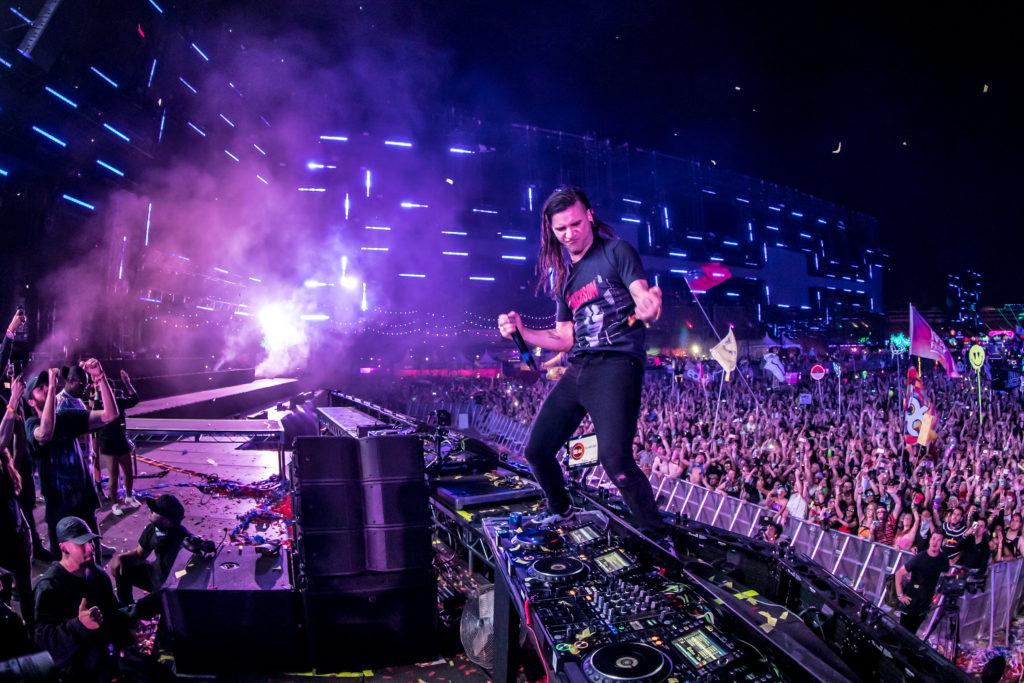 Another Night 2 highlight at the circuitGROUNDS was Martin Garrix in the prime 1:30 AM slot. Martin wowed the crowd with his mind-blowing visuals, a couple of tasty new IDs to go along with his many hits that he dropped throughout his set, and even a few new surprises that even the most ardent Garrix fan would not have been expecting. After leaving a Martin set, there should be no doubt as to why he’s the #1 DJ in the world.

The circuitGROUNDS remained the place to be on Sunday also, where headliners flocked to packed out sets from Steve Aoki, Zeds Dead, Illenium and Ekali, a fitting mix of OG producers and fast rising youngsters. Not that those who went to kineticFIELD were disappointed, either; Diplo dropped an incredible set that transcended all genres as he went from tech house all the way to his “Old Town Road” remix. His good buddy Dillon Francis followed and dropped a loud and ratchet set. I got up close and personal for Dillon at Coachella and he relied more on his core moombah sound and mainstream-leaning tracks; here at EDC, it was straight trap and bass. Both Dillons are good, they’re just each a little different.

EDC’s shuttle systems proved challenging on day one, with opening ceremony shuttles running late and a choke point on the route causing severe delays. Thankfully, logistics improved throughout the weekend, and both regular and premiere shuttles operated very smoothly and effectively. Lines to get in the festival were brisk and efficient. Overall, organizers deserve applause for great logistics throughout the weekend.

EDC Vegas emphasizes its attendees and experience, a big departure from the heavy music focus of its contemporaries. The music is important of course, but the fan experience created a truly lasting impression. In a festival world dominated by corporate clutches and organizer apathy, EDC embraced its attendees with a warm hug. It truly felt like a safe, but fun space, one not easily replicated elsewhere. Perhaps this is why EDC continues to thrive while other festivals decline; it’s a festival for the fans first. You truly are the headliner, and in our often mundane worlds, that special recognition can change your life. EDC Vegas: a rave with a heart.