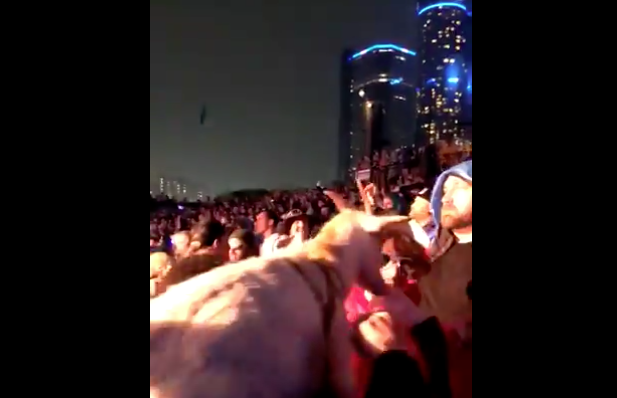 To everyone wondering why and how there was an actual goat in the crowd at Movement Detroit this year, there’s a somewhat reasonable explanation for all of this…

The goat, which made his rounds at the music festival and caught GRiZ’s epic closing set at the main stage on Monday, is owned by Detroit’s Erick Brown. The man is a local celebrity, as is the goat.

Many in the crowd who witnessed Brown carrying his pet goat through the crowd were left in shock. Some took photos and videos, or turned to their friends like, “WTF?!” Others, mainly Detroit locals, know the owner’s backstory and realize this goat is much more than a goat — it’s his BFF.

It’s easy to shake your head at this and say, “Who brings a goat to a festival?!” But, there’s more to the story…

Prior to the spotting at this year’s Movement, Brown’s life journey made local papers, including the Detroit Free Press. “He moved to Detroit to create his own utopia. It almost cost him his life” — this viral article explains the hardships that Brown and his previous goat, Deer, faced together in their newfound home. This includes a brutal beating Brown suffered, which nearly took his life.

Word on the street is that despite Brown’s local fame, he was recently jumped and beaten again. We’re unable to find any evidence of this recent incident or if Deer suffered because of it, but amidst the whispers in the crowd I heard firsthand — “My friend watched him get jumped last month” and “I think his old goat died,” etc.

To better understand the story of Erick Brown and his goat, we urge you to read this.

Still, that doesn’t begin to explain why security would allow the goat inside festival grounds. Surely, Movement isn’t the place for a goat — even though the animal was welcomed with open arms and there’s no doubt his owner loves him dearly.

I’ve personally pet this man’s goat once or twice outside the festival gates, as they were roaming around last year. However, I can’t recall if it was Deer or this new goat he had by his side. Perhaps outside the festival, where it’s not as loud and hectic, is a better place for Brown to experience the festival with his bestie next year.

See some of the footage and comments below.

Hes a famous, homeless, Detroit local, he was attacked a few months ago and his other goat was killed in the attack i believe and this is his new goat. He takes that goat everywhere he goes! It's like his support animal.

Lmfao clearly you’re not from Detroit. Ive met that goat like 20 times

This goat is more famous than you'll ever be

someone brought their goat to movement 😩 pic.twitter.com/gHE4VDQgoC

How does one bring a goat into movement you may ask? Well if there’s a wook, there’s a way pic.twitter.com/9FLFcKre93