The Advent of Social Media and Dance Music Culture

by Your EDM Staff
in Editorials, EDM News, Featured

Advances in technology are the hallmark of the evolution of the human species. From the creation of simple devices like wheels and controlled fire, to indoor plumbing, the printing press, and the latest nanotechnology, leaps and bounds in the ease and sophistication with which everyday and complex tasks can be carried out have undoubtedly revolutionized the way in which human beings live their lives. But perhaps no technology in history has changed communication as much as the advent of social media within the last decade.

The internet itself has had a massive effect on mass communication. The ability to send not only text and voice, but photographs, recorded video, audio, and other multimedia to every far-flung corner of the world in mere fractions of a second is undoubtedly one of humanity’s greatest achievements. Now, news of events seven thousand miles away is available at the push of a button; great ideas can be spread at breakneck pace; and it’s entirely possible to waste thousands of hours mastering difficult skills in the comfort of home.

Integrated into this is social media: tools that have revolutionized the way in which we communicate with one another. Outlets like Facebook and Twitter easily allow for people to share every moment of every day with each other through microblogged text; Instagram and Pinterest spread the beauty of the world to others in different cities, continents, and biomes; and tumblr posts provide a more long-form method of communication, allowing for the development of more complete, sophisticated thought processes. Mobile technology plays a huge role in this, as well; rather than having to wait for prints to come back from the shop in small quantities, it is now possible to snap a picture on a cell phone and instantly share it with almost anyone in the world. Throughout the developed world, these social media technologies are juggernauts in the way information is transmitted.

And just as technological development has helped to increase the diversity and energy of electronic music through increasingly sophisticated equipment and software, so too has the advent of social media fundamentally changed the way music is portrayed to the world. There’s no doubt that, without avenues like Facebook and Twitter for exposure, YouTube and SoundCloud for fans to preview and stream tracks, and iTunes and Beatport for sales, electronic music would be a very different world than it is right now.

For one thing, many producers and DJs are highly active in social media; take, for instance, deadmau5—by far one of the most prolific ‘tweeters’ in the dance music world, deadmau5 constantly releases tracks, voices opinions, and shares information about the scene through Twitter. Twitter is an essential component of the careers and social outlets of many producers, such as Kaskade and Dillon Francis—the latter being perhaps one of the most entertaining people to follow—and as such, frequent tweeting serves several functions that help keep these producers fresh in the minds of their fans. Twitter also provides a unique and convenient method through which anyone can directly open a dialogue with producers and other fans alike. Throughout musical history, this powerful means of communication has been completely unheard of: there was no way to talk to the famous band leader, and establishing connections between fans was a matter of painstakingly creating fan groups and having meetings. But now, with the integration of @ mentions, hash tags, and direct messages, anyone can type a few keys and have his or her sentiment dropped directly into the inbox of whomever they’re trying to reach. All of these powerful social media concepts, combined with increasingly widespread internet reach, make it simple for people to coordinate events, send group messages, and simply talk about anything with anyone.

Another social media component that’s dramatically increased the accessibility of the scene is the blog. As convenient repositories for all sorts of scene-related news—new track releases, upcoming events, discography backlogs—blogs stand as the living, breathing center of the dance music world, constantly keeping fans updated with a surprising barrage of information. It seems that no other style of music has taken to the blog format quite like EDM has: while you often hear of certain highly reputable online publications skyrocketing the popularity of certain indie darlings, dance music blogs cover nearly every facet of the scene with a huge variety of opinions. With hundreds of new tracks being released every day, keeping up with release schedules is a full-time job; some blogs are dedicated to nothing more than simply posting previews of all of these, acting as digitized record stores with endless samples available to peruse. Other blogs might focus on sponsoring and covering live events; still others offer unique insider perspectives on the goings-on behind the DJ booth. User-created content is likely the key to the development of the dance music world—without legions of dedicated, multi-talented fans, the music we idolize would likely fall by the wayside, unnoticed and forgotten.

Other sites, like SoundCloud, YouTube, and internet radio like Pandora and Digitally Imported, allow fans to focus their interests on a few specific artists, or broaden their horizons and discover new music from all over the world. With hundreds of thousands of tracks uploaded to these sites and new ones being added every day, it’s quite uncommon to search a track and not have it come up. This has effectively eliminated the compulsory purchase sans preview; in the past, before in-store listening booths, buying a single or LP was almost required to hear the music, particularly given EDM’s limited radio exposure. Now, it’s a triviality to find and judge any given piece of music before making an informed decision on whether to buy it from iTunes and Beatport. The advancement of these social technologies, with each concept acting as an integral component in the process of spreading a finished product from producer to consumer, has truly streamlined the spreading of ideas and media between people.

The power of all of this incredible technology, however, belies more sinister uses. In a recent editorial, EDM Snob discussed a psychological and sociological concept called “social proof.” The idea behind this social proof is that the more people are engaging in a certain action, the more likely it is for other individuals to engage in that same action in the future. This applies to social media in an unsurprising way: we live in a world where hard facts, figures, and statistics are the most powerful currency, and these numbers show up constantly in the form of page hits, Twitter followers, Facebook likes, and YouTube play counts. While it is entirely possible—and, in fact, encouraged—for a talented musician to grow through the organic means of simply producing great music, it seems far more likely that the profit-minded label executives are pulling the strings. Respected electronic music site Mixmag recently released a feature detailing how record labels, though opting to do most of new artist growth organically, will kick-start the popularity of new talent by simply buying Facebook likes.

That’s where social proof comes in: by artificially inflating the perceived number of people involved with a given activity, in this case liking the artist on Facebook, purchasing likes makes spreading information on new artists much easier. It’s easy to see this cheating going on everywhere: you can even buy Facebook likes in chunks of 1,000 on eBay. This devious brand of sleight-of-hand can even be seen in worldwide print publications like DJ Mag: during its yearly Top 100 DJ voting contest, DJ Mag released a press statement saying that they had received reports of several DJs in the contest buying votes, again off eBay. While the magazine is still investigating the matter, these are obviously serious claims that could have major repercussions for those involved. 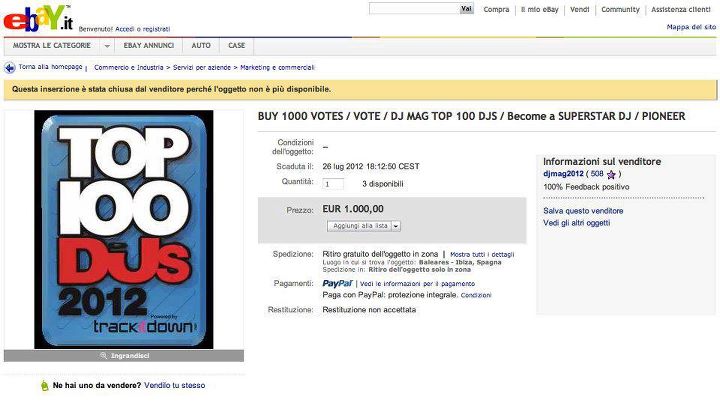 Even with all of these scandals permeating the dance music world, it’s clear that social media has been an incredibly positive force on the evolution of the scene. While it remains true that wealth can purchase popularity, it can’t purchase talent; many of the big names produce bland music marketed to a huge demographic, limiting its inventiveness and creativity. Unfortunately, there are thousands of unique and talented producers signed to smaller labels with fewer resources, so competing against internationally recognized, profit-minded labels is a challenge—but here is where social media shines in its own way: simply due to the powerful communication channels available to them, these smaller artists still have unprecedented methods to publicize themselves, even if they don’t have the boon of social proof behind them. Regardless, the advent of social media has been a monumental shaping force on the development of EDM, and will undoubtedly continue to be the main method of information transfer in the future.