This past weekend I had the pleasure of attending one of the most prestigious electronic music festivals in the world, Ultra Music Festival. It was my first time attending UMF and I tried to keep an open mind, although I did have some pretty high expectations. Upon arrival on site Thursday night I could already tell that Ultra was something truly special. Never before had I felt such energy, such passion and such excitement for an event, the gates had not even opened nor had the lines formed.

Needless to say I was excited to arrive at Ultra on Friday for my first day of festivities. Heineken was nice enough to invite me up to a penthouse apartment across the street from Bayfront Park where I was presented with a fantastic view of Ultra Music Festival’s grounds. Also in the apartment was the talented DJ duo, WhiteNoize, who were incredibly personable. They talked about their remix project with Heineken and their recent and future works. As we looked down at the Ultra grounds we watched the line of people waiting for the gates to open grow and begin to snake around. It was a fantastic day for a festival, absolutely pristine.

Eventually I went down to the press check-in, got my credentials and entered the festival. It was overwhelming. Not in a bad way but in a good way. I was overwhelmed with the joy of the people around me, with the options of talent at the stages and with the sheer beauty of the area I was in. I had so much trouble choosing which stage to begin my Ultra experience at that I decided to simply wander the grounds. The stages were all unique and awesome and so was the talent. There were the fantastic grooves from Jamie Jones in the Carl Cox Arena, the unbelievable energy produced by Tritonal on the Ultra Worldwide Stage and the absolute insanity at the Live Stage courtesy of Modestep.

I realized that one of the greatest things about Ultra is, well Ultra. The energy is fantastic, the people are fantastic and the grounds are fantastic. It is the opportunity to see acts that you otherwise wouldn’t. It is walking by a stage where an act you would never choose to see is performing, and liking it.

After walking the grounds for a few hours I decided to settle down in the Carl Cox Arena. By the time I arrived Carl Cox was already in the mix and the Arena’s production was in full swing. Never have I ever experienced a venue like the Carl Cox Arena before. It had the atmosphere of a great club but with that “Ultra” factor that took the energy to a whole different level. The iconic Carl Cox was better than ever and LED panels lowered and raised back up, lasers shot out from all sides and the fantastic light show would have been enough to entrance me by itself.

Eventually Carl Cox left the stage and so did many people in the crowd as Swedish House Mafia had begun their second to last performance. However, I chose to stay in the Arena for Fatboy Slim, which ended up being an absolutely fantastic decision. Fatboy was as good as ever. He went all in right from the starting line with Mad Dash from Carl Tricks and continued to impress for the next hour and a half. From Kernkraft to Still The Same Man, Fatboy touched upon many genres and treated the crowd (though small) to an extremely special set. Eventually and unfortunately Fatboy Slim’s set came to a close. Though disappointed day 1 was over, I knew I had 23 hours of Ultra Music Festival madness ahead of me and I would take advantage of all of them. 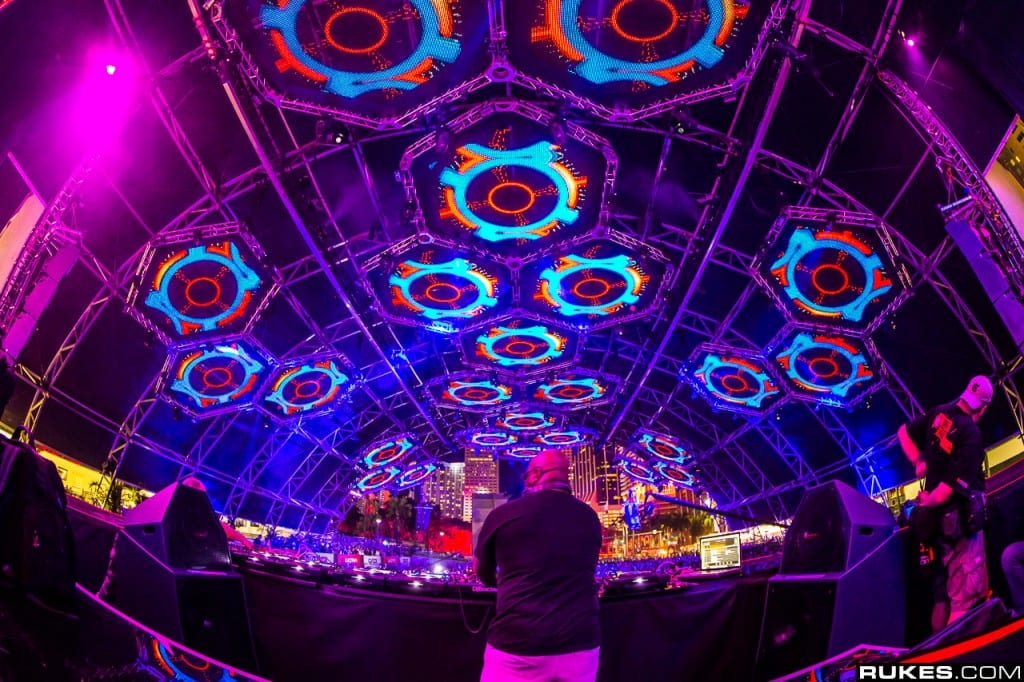 My hotel room overlooked the Ultra grounds and the sound from Main Stage infiltrated my room, which was not necessarily a bad thing. I was in the middle of writing emails when I heard Miss Nine drop Bless Di Nation and I knew I had to get down there as fast as I could. I was able to catch the second half of her performance which was nothing short of impressive.

After Main Stage I began to wander again. I had used the Ultra app to make my own schedule however I ended up straying from that quite a bit. The amount of talent at Ultra is unbelievable and there were so many sets I went to simply take a quick look at and ended up staying for an extended period of time. Walking by the Ultra Worldwide stage I was so impressed by the sounds of Walden that I could not pry myself away. After Walden came Sunnery James and Ryan Marciano who threw down an incredible set that had the entire place going insane.

I am generally a person that prefers Trance, Tech-House, Techno, Disco and more traditional House music. Somehow I ended up finding myself somewhere I would have ever placed myself, backstage at OWSLA. One of the best things about Ultra is that there is always talent on every stage. There are so many opportunities to expose yourself to new music. I had such a good time at the OWSLA stage that I ended up returning there later that evening.

I again took a couple hours to just wander around Ultra’s grounds; taking in the sights and sounds. For the most part the people that attend Ultra are amazing. They are the people I want representing my music genre, not the commercial house goers but the ones that truly stand for peace, love, unity and respect. It was refreshing to be around this ilk of people after some of my recent experiences at commercial house events. Most attendees really cared about the music and the other people around them and not about doing drugs and seeing a DJ play the Beatport top 100.

I then returned to the OWSLA stage for what would end up being a very special evening. I spoke with Skrillex backstage who told me he would be going back to back to back with Alvin Risk and Porter Robinson. To be honest, I really did not believe him. I thought he was just joking around because dubstep fan or not I knew that was something truly unprecedented. The later it got the more people began to leave the OWSLA stage and the more celebrities began to gather backstage.

I was immersed in a very impassioned conversation with DJ Carnage about Chipotle when he suddenly grabbed Madeon. I am not sure who was more surprised, the young Frenchman or myself. Carnage proclaimed to me that he and Madeon are brothers; they are “both black and both have big dicks”. Madeon nodded slowly and we all laughed.

Alvin Risk began his set and neither Skrillex nor Porter Robinson were in the booth, though both were on stage. I figured that Skrillex was in fact messing with me and there was no back to back to back to ensue. How wrong I was. Not only did Porter, Skrillex and Alvin go absolutely insane on the decks but they were also momentarily joined by Zedd who played Clarity and his “favorite song in the world” Levels “by Swedish House Mafia”. I looked around at the crowd on stage that included Boys Noize, Madeon, Blood Diamonds and more along with the four in the DJ booth. I looked out at the growing numbers of ultra-goers who were having the time of their life. I realized in that moment that there is nowhere else in the world something like this could happen. It was really something special and I highly doubt that anyone that was at that stage on Saturday will forget that set for a very long time. 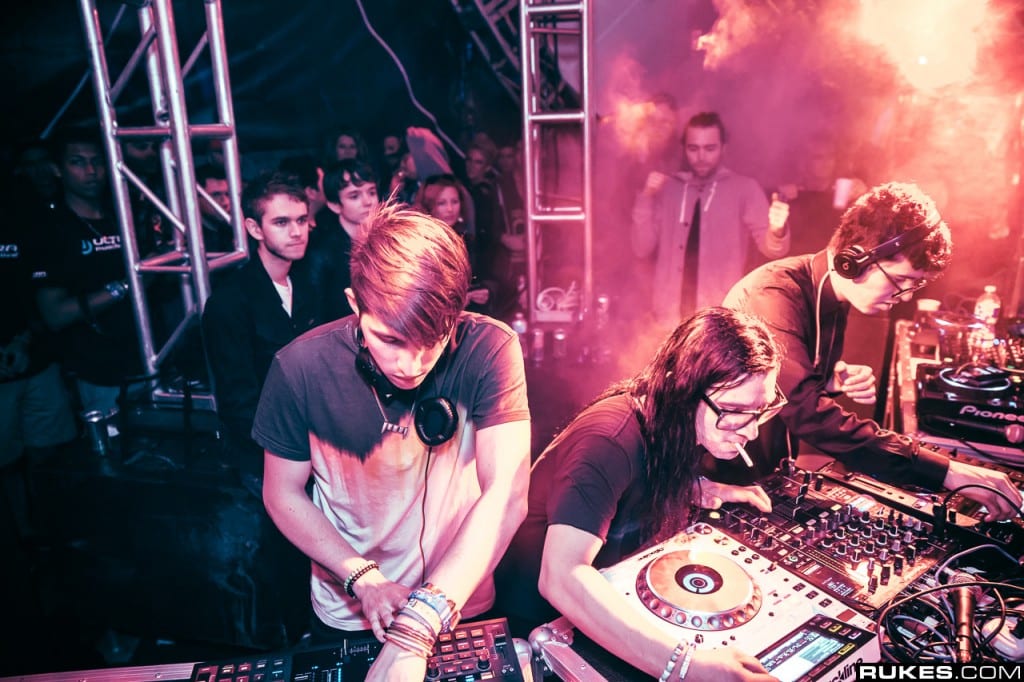 My day began with the awful realization that I had only one day of Ultra left. I was prepared to make the most of it and arrived well before gates opened. First stop for me was Main Stage for the oh-so-talented Classixx. They threw down an awesomely groovy and funky set. I think they actually surprised a lot of the crowd there with how impressive their set was. From there I headed to check out French Fries. I will be completely honest with you and say I had no idea who they were before Sunday. That being said, I am so happy I checked them out. It was yet another talented performance I was impressed with.

On Sunday what was the Carl Cox Arena was turned into the Space Ibiza stage and featured some of the biggest names in commercial house music. As I walked away from the Live Stage I poked my head in to discover Eric Prydz was on the decks. I stayed for a decent amount of time and enjoyed myself quite a bit. Eric threw down insane beats that had the crowd in a state of shock. He was brilliant, filling the arena with house beats that you couldn’t help but dance too. It was later revealed that Calvin Harris ran in to traffic on the way to Ultra. Kaskade took his time slot and David Guetta, Tiesto and more shortened their sets so that Calvin Harris could play one of his own when he arrived.

I had to pry myself away from Eric Prydz because I wanted to catch some of Wolfgang Gartner’s set on Ultra’s Main Stage. When I reached Main Stage I heard one of the most brilliantly crafted sets I saw all weekend. Wolfgang Gartner took Ultra-goers to the fringes of his musical imagination. Bizarre drops and creative sounds filled the air around Main Stage as the birthday boy gave a present to the throngs of people.

I then reached the UMF Radio stage where the Toolroom Knights were in full swing. The beautiful stage was easily my favorite at Ultra. Nestled in a grove of palm in the far corner of UMF’s grounds it had an amazing and intimate vibe. The sunlight was beginning to fade and the lights from main stage danced across the high-rises of Miami.

Chus & Ceballos took the decks at Toolroom Knights and had the crowd in a full on groove as the sun set over the Miami skyline. When Chus & Ceballos finished up Sander Kleinenberg entered the booth. He delivered a very unique set that began with Tech House and moved into harder Electro House. The last DJ I saw at Ultra was the extraordinarily talented Mark Knight. He was perfect in every aspect and there was no better way to end my Ultra. 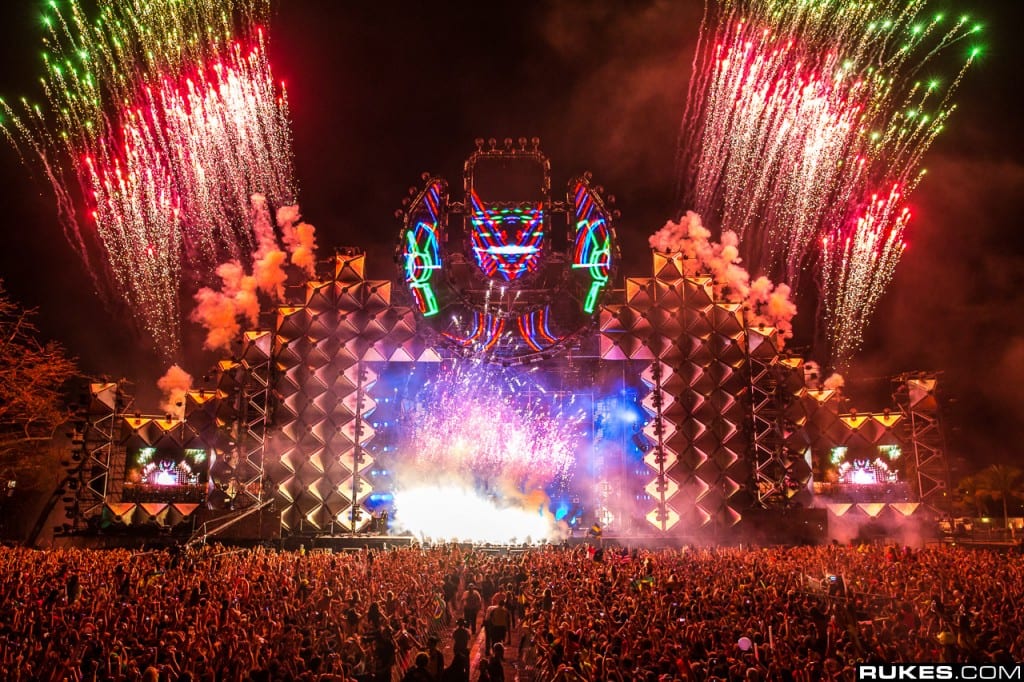 Overall Ultra was the experience of a lifetime. It is something that every dance music fan should do, no matter what genre you prefer. There are things that happen at Ultra that will not and cannot happen anywhere else in the world. It is the combination of the place, the people, and the artists that create one of the best events a dance music appreciator could ask for. As for me? I am hooked. There is no doubt in my mind that, although I live in the northeastern USA, this will not be my last Ultra Music Festival. In fact, if I have it my way, I will not miss another Ultra for a very long time.

Thank you to Rukes for taking some great pictures. Also thank you to VJ TBot, Louis, Eric, Matt, Lucie, WhiteNoize and Heineken for making my weekend especially awesome!