A bit of drama broke out yesterday between the managements representing Diplo and DJ BL3END over the fake Facebook likes purchased by DJ Bl3ND’s management. DJ BL3END has over 3,000,000 fans on Facebook which far exceeds the likes of Afrojack, Nicky Romero, Kaskade, and many other famous artists. At the IMS Engage Social Media Panel yesterday Diplo hinted toward the purchased facebook likes which resulted in Steven Haddad, DJ Bl3ND’s Manager, calling out from the audience after the Q&A. Angered by the comment, Diplo’s manager, Kevin Kusatsu, told Steven to shut up. After the panel, the two men got in a heated discussion which eventually lead to a physical brawl.

We at Your EDM do not support purchased facebook likes and can see where the tension is coming from. DJ BL3ND is falsely representing his popularity and is presenting a a skewed view that is not fair to the thousands of other artists trying to create a legitimate brand. We will keep you posted as more develops. 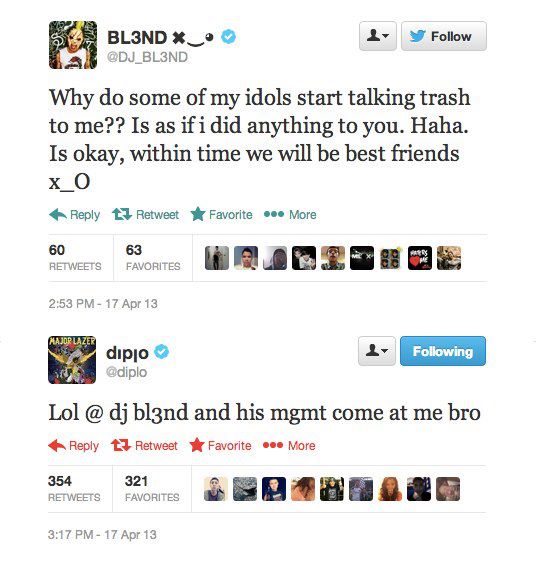 The original photo was posted (here)

Bassnectar Opens Up About New Music, Future Of EDM

Daft Punk’s Get Lucky To Be Released At 12:01 AM ET Friday

Daft Punk's Get Lucky To Be Released At 12:01 AM ET Friday