Deadmau5 and Kat Von D Have Called it Quits

It’s official folks, Joel Zimmerman aka Deadmau5 and tattooed celebrity Kat Von D have ended their engagement. Taking to Twitter, Von D accused the Mau5 of infidelity, saying, “Cheating on your loved one is the most hurtful thing one could do.”

Unfortunately Kat Von D is no stranger to being to cheated on, having dealt with an all too familiar situation with TV personality Jesse James. There has been no word from Zimmerman’s camp yet, but given the EDM superstar’s vocal nature on the internet it would be surprising if he declines to comment on this development.

In today’s celebrity obsessed society, short term engagements and marriages are all too common and it seems that Deadmau5 himself is no exception from this fast paced, frantic love game. One can’t help but feel sorry for Von D, but this just goes to show this is the nature of the beast. If you feel so inclined you can check out the breaking Tweets below.

Cheating on your loved one is the most hurtful thing one could do. I hate to have to admit, that this relationship is indeed over.

UPDATE: Deadmau5 has added some much needed clarification and confirmed that they have split: 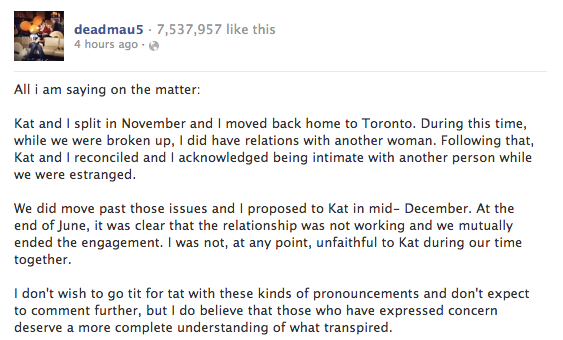