Is the EDM Culture Inherently Sexist?

by Diane Tamulavage
in Editorials

The other day I went out and bought some shiny new booty shorts to wear to a Dada Life show, yet when I returned home, I stumbled upon this article claiming that EDM is Sexist and why it sucks to be a female raver.

My new booty shorts stared at me from the corner of the room, making me feel guilty for investing in such a short yet flattering article of clothing, as I opened the article and began to read the author’s 8 reasons why she believes the EDM culture targets women as sexual objects.

Although the author actually makes little to no points in order to support her claim, and some of these are attacks rather than justifications, her 8 reasons, in summary, are as follows:

1. DJs are now utilizing the female body to promote themselves by shoving stickers onto naked tatas and booties and having them photographed.

2. Twerking, and other ‘suggestive’ dance fads are supporting the idea that “a woman has nothing but her sexuality to rely on as a money maker”, and submitting pictures of yourself half-naked and upside down is only asking for negative attention. Thanks a lot Diplo.

3. Peer pressure is making women dress half-naked at EDM events. It could be because you want to show off your perfectly sculpted body that you’ve worked hard to maintain, but it’s probably because you succumbed to peer pressure.

4. If a woman dresses half naked, she is inviting the ‘male gaze’.  So wear more clothing to make men stop inappropriately touching you.

5. It is becoming expected for a woman to go topless and get a champagne-facial in order to be photographed by people like Kiril Was Here.

6. Women are taken less seriously and are forced to sell sex for fame in order to make it in the DJ world. It’s the fans’ faults that there are so few women in DJ Mag’s Top 100 DJs.

7. You’re a slut because of the way you dress. You’re the reason neon bros wear shirts that say “Party With Sluts.”

8. Stop playing into sexist stereotypes by dressing half naked, and stop using ‘slut-shaming’ as an excuse to feed into these sexist stereotypes. You’re brainwashed to think it’s acceptable to dress and act this way.

I am not going to address the lack of women DJs because, well, I already did that, but will instead focus on female attire seeing as 5 of the author’s 8 points incorporate the way women are dressing at these events.

Soooo should I not be wearing  booty shorts, crop tops, thigh highs, etc at EDM events? Am I just promoting the sexism within the culture by adhering to these expectations of what women should wear at raves?

In her attempted defense against sexism in the EDM scene, the author actually exhibits many sexist tendencies. Yeah, maybe a DJ shouldn’t be slapping their sticker on a nipple in order to promote his or her self, but claiming that a woman is only dressing a certain way because they are ‘peer pressured’ and it is ‘expected’ is a wide generalization of female ravers.

I only argue this point because I don’t think there are these sort of ‘expectations’ at an EDM event. Tutus, fluffies, and bras may have become the stereotype, but I certainly do not think it is an ‘expectation’.  As a female raver, there have been times when I had gone to shows in mini shorts and bandeaus, but there have also been times I donned leggings and t-shirts, feeling equally comfortable in both clothing choices. Female friends of mine have worn harem pants or ridiculous banana costumes to events in the past. The beauty of this culture is that one is able to dress in whatever way they feel comfortable and not be, or should not be at least, judged for it. 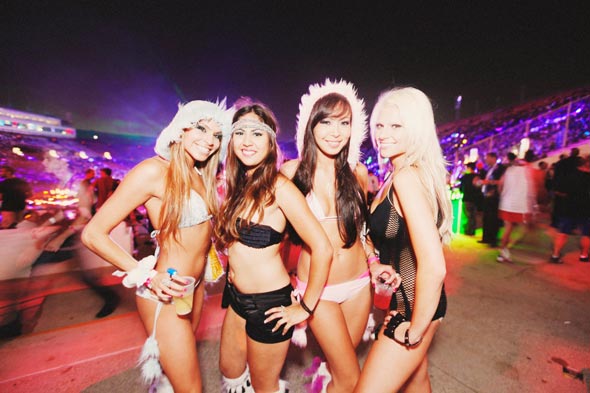 If you do choose to wear less clothing, it is important to establish that you are not a slut for the way you dress, nor should the way you dress  be an open invite for random men to rub their penis on you. If an annoying bro chooses to wear a shirt that declares “Party With Sluts,” good for him. That does not mean you are that slut just because you feel sexy and comfortable dancing half-naked. And saying that the way you dress invites ‘male gaze’ is just another way to victim-blame if a man were to assault you or make you feel uncomfortable because you look hot. If your rave booty is out and about, and a man inappropriately touches it without your consent, that is still not an excuse for him. The author’s point that the way we dress is an invitation to male gaze baffles me.

“It saddens us to speak to women at music festivals and hear that they’re constantly being grabbed and harassed by men because of the way they’re dressed. […] Creative women of EDM, we’d like to encourage you to express yourselves in new ways that don’t cater to the male gaze.”

Yeah, it saddens me too. But we shouldn’t blame the way we dress; we should blame the fact that society somehow teaches that it is okay for men to behave in this manner. If you have a great ass, it’s going to look good no matter what you wear, whether it’s in booty shorts or sweat pants. Neither of these clothing-choices should be a green-light for strange men to harass you. We should not have to change the way we dress in order to deter men from touching us. We should not even have to be concerned that the way we dress is going to provoke such activity.

I see sexy shirtless men at EDM events all of the time. However, as much as I’d want to, I don’t go up to them and start stroking their perfectly sculpted abs, because I was taught that such activity is socially frowned upon. Nor do I feel as though men should have to wear more clothing in order to prevent my attraction to them. 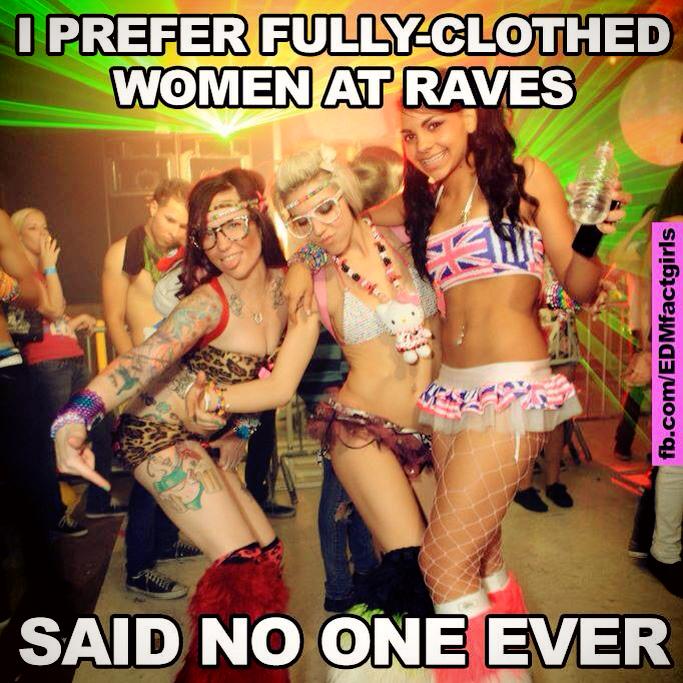 Jahan from Krewella provides a very important and interesting point on sexism in the media.

“What I’m more curious about is why our so-called ‘enlightened,’ free-thinking society won’t allow women to explore their sexual desires without condemning them. […] What kind of message is this sending? That we are welcome to explore our sexiness when HE wants us to, but not when WE want? That we should sanitize our explicit actions and only let them come out from hiding when we are the object of the masculine gaze? […] We are in denial if we don’t think gender representations in the mass media and the public’s reaction to them are sexist.”

Like the author of the original post, I am “a self-respecting female with professional aspirations and a desire to be taken seriously;” however, I feel as though it is important for a woman to be able to express and explore herself in regards to her own femininity, and not on the basis of a male-dominated culture. While I agree with the sad fact that you probably won’t get in many professional photographs or be featured on Kiril Was Here’s website if you aren’t wearing revealing clothing, I think it is blatantly sexist to suggest that a woman who chooses to wear less clothing at an event is a slut, promotes sexism, and is only doing so because she is being peer pressured.

Maybe I am just brain washed by the sexist EDM culture into believing that it is okay to wear belly shirts and tutus, but I think it all comes down to the individual woman to decide what she feels comfortable wearing. Would I wear pasties and panties to a festival? I’ll be honest. No, I wouldn’t. But I also wouldn’t judge or ‘slut-shame’ the girl that does.

Little Boots Lights Up Her Tour With ‘Cyber Cinderella’ Dress