by Your EDM Staff
in Editorial, EDM News

Chicago’s own interest group aimed at bringing house music to the masses have gathered an epic line up of top-tier trap artists to join their One Night Stand college tour. House of Chi and their loyal army of EDM enthusiasts will travel to 4 different colleges this spring, running the show and the trap all over the Midwest.

Heroes x Villains, the duo from the birthplace of trap music–ATL, ho!–will be fresh off the Digital Assassins Tour with bass powerhouse producer Datsik when they meet up to get turnt up. Best known for their massive remix of Ace Hood’s “I Woke In A New Bugatti”, HxV has proven remix and production prowess for years. As someone who’s seen them in their element in the dirrty south; this is a performance you don’t want to miss.

The Brazillian trap duo Tropkillaz are making their U.S. debut on this inaugural tour for House of Chi. Their hottest song to date is their remix of N.A.S.A’s “Hide”. Better recognized as the song from the Sonos commercial featured during this year’s Super Bowl. Their sound is similar to Major Lazer, if someone turned up Major Lazer’s island swag to 11 (on the dot).

The rest of the line-up is no rest at all. The Regulators have been turning up Chicago nightlife for over a year now. Their most recent release, “Tipping Point”, is an excellent future-trap track that will tease you with these boys’ lighter side, but trust me, this duo only throws down one way live: HARD. Zebo is another Chicago nightlife staple. He consistently opens sets for the hottest Chicago shows for big name artists. Why? Because he can play any genre to any crowd anywhere. He is the definition of a good DJ.

Arrive early because the supporting acts won’t even begin to let up the assault on your senses. Kyral X Banko, Statut3 and the World Class Art Thieves are all prepared to get the party started off right. Check out the tour dates below and grab your tickets here: http://hoc-events.com/one-night-stand/. Like House of Chi on Facebook to see their passwords and weekly parties at Chicago’s hottest clubs (i.e. The MID, Spy Bar Chicago). They also know where all of the good afters are in the city. They’re an excellent resource for music in the Chicago nightlife. 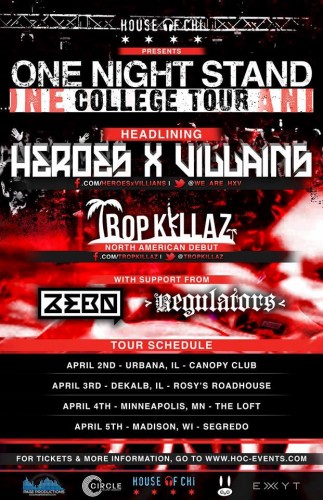