A Hardwell Ghost Story: How the #1 DJ Fought Supernaturals With ‘Ghosts N Stuff’

Hardwell‘s recent show through his Revealed Recordings North America Bus Tour in New York near Niagara Falls occurred under unusual circumstances on Monday. With Dyro and Dannic‘s sets going flawlessly, the number one DJ in the world surely expected the same when he stepped up to the decks, however, The Rapids Theatre had other plans for him.

A spooky theatre with an eery past, The Rapids is known as one of the most notoriously haunted locales in the state of New York. The strange activity is reported to have started after an actress committed suicide in the building. Full ghost-like apparitions, slamming doors, audible voices and the sound of footsteps have all been witnessed on several occurrences within the theatre.

Having opened their doors for ghost enthusiasts and even the show “Ghost Hunters” itself, it’s any wonder that shows still go on in this venue. 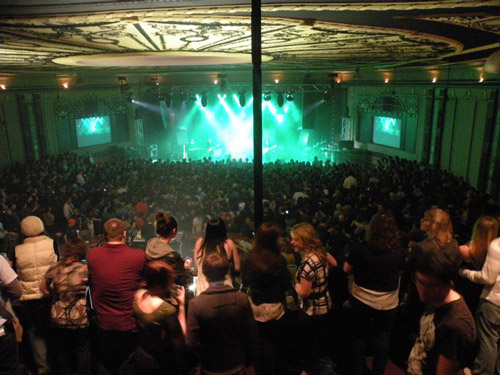 Back to the story… About 45 minutes into Hardwell‘s set one of his CDJ’s mysteriously stopped working and the music cut out for several minutes as DJ and Techs worked to solve the problem. As the night continued his other CDJ was skipping for no particular reason, and which is very rare for such quality equipment. Eventually Hardwell cut the music to discuss the history of the venue and explain how odd these technical occurrences were.

After this brief intermission, Hardwell jumped back in with Deadmau5‘s hit Ghosts ‘n Stuff, tells the ghosts to “f*ck off”, and the crowd continued to rage with middle fingers held high. This tactic appeared to work as well, for no more technical difficulties were had the rest of the night.

Madeon & Moroder Currently Have a Project In The Works

Madeon & Moroder Currently Have a Project In The Works