Is Coachella Slowly Ascending Into An All-Dance Festival?

As Calvin Harris earns the “second biggest crowd in Coachella history,” you have to wonder what the festival has turned into. As Queens of the Stone Age and AFI lost huge chunks of their crowd to the Sahara tent, many are speculating that the festival has taken an abrupt turn in the direction of EDM.

When Coachella started back in 1999, the headliners included acts like Beck, Tool, Morrissey and Rage Against the Machine. The climate of music was much different back then, with little to no EDM acts taking big stages at festivals. There likely weren’t any festivals at all featuring any prominent EDM producers (or as it was so prominently called back then, techno). Though, even back in 2001, classic acts like Paul Oakenfold, Fatboy Slim, and Planet of the Drums (DJ Dara, Dieselboy, AK1200) were taking the stage. And slowly but surely, more and more EDM acts including Armin Van Buuren and The Prodigy made it onto the festival line up.

Now, attendees will be able to tell you better, but with criminally low attendance at Outkast’s show, and Andre 3000 asking the lackluster crowd mid-performance, “are y’all still here?” the trend does seem to be leaning more toward electronic music rather than traditionally-defined instrumental bands. And that’s awesome for many reasons. However, when Coachella started it was a celebration of many different types of music. The recent shift toward dance-fueled explosive sets and massive feats of stage lighting draws a certain type of person to the festival that might prioritize the event experience over the music. Not that this is inherently bad, but it often attracts certain less-than-desirable individuals. 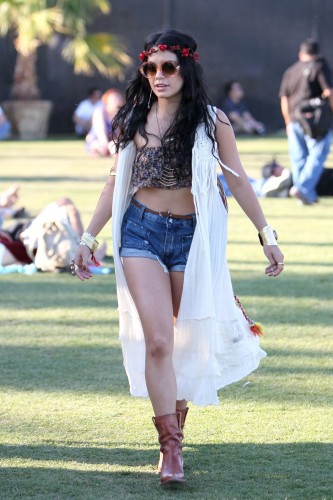 In recent years, it seems the festival itself has become much more of an status symbol than anything else. With celebrities allegedly being paid by companies to attend and rep their brands, it has become fodder for Hollywood B-level celebrities. It was reported that Lacoste and McDonald’s were paying Lea Michele and Vanessa Hudgens $20,000 and $15,000, respectively, to attend the festival (allegations were denied by Lacoste).

In the same vein, the VIP accommodations are often a joke. As was related to me by a close friend who attended, the VIP area is often so packed that it bottlenecks at the entrance and leaves no room for people to move around within. Even more egregious, the festival grounds are now offering a gourmet meal with your VIP wristband, with the price for admission jumping up to $1,024. And as The Daily Beast puts it, “Then there’s the Safari Tent—a luxurious, fully-furnished ‘Shikar-style tent’ equipped with two queen beds, air conditioning, electrical outlets, tables, and chairs. That’ll cost you $6,500 for two people, and $1,500 for each additional guest. There are dozens of these lux-tents located in a space dubbed ‘Safari World.'”

For a festival that I’ve only attended once back in 2010, I can only imagine how different it must seem now. The Sahara tent has grown in size to nearly two football fields and a new dance tent Yuma has been added for more experimental electronic music. As a consequence, EDM now accounts for more acts than rock bands at the festival. 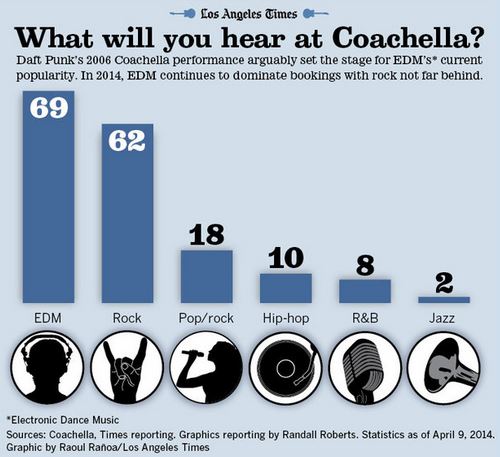 As festivals around the world begin to embrace popular dance music in exchange for increased ticket sales, I wonder about the state of the scene in the coming years. Big festival genres like Big Room and Festival Trap bring in huge numbers, but they don’t challenge producers or engage listeners. According to the LA Times, Coachella brought in $67 million in 2013, up from $47 million in 2012; and those numbers are likely to be even higher this year.

Don’t get me wrong, I love EDM and (almost) everything that it stands for, but I feel like Coachella of all places needs to find its way back to its roots. Not necessarily that it should do away with electronic music altogether, but when Skrillex is taking people away from Muse, when Arcade Fire has to compete with Duck Sauce, something should be done.

According to Yahoo! Music, “Although Arcade Fire drew a big enough crowd for their closing set Sunday night, frontman Win Butler made reference to the split in some pointed remarks from the main stage: ‘Shout-out to all the bands still playing actual instruments at this festival.'”