As Miami is still left reeling and recovering from its own Ultra Music Festival, the festival is already making preparations for its July appearance in Europe. The 3-day Eurotrip will take place in Split, Croatia.

The Phase 1 line up announcement included Armin Van Buuren, Hardwell, Tiesto, Afrojack, Carl Cox and David Guetta. But with many of these large festivals, and especially Ultra, these headliners are announced in waves.

Among the producers announced for Phase 2 of the line up are: Above & Beyond, Alesso, Disclosure, Example, Knife Party, Marco Carola, Paul Kalkbrenner, Paul van Dyk, Pretty Lights, Showtek and Steve Aoki.

Europe doesn’t have quite the propensity for off-the-wall festivals like the US, but this could change things. Different focuses in terms of music and community could prove a challenge to the Ultra group, but we’ll see if they fair as well this year as last. 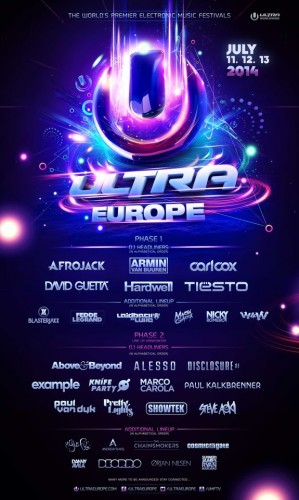 Your EDM Mix with Vanic – Volume 5