Logan Bohbot Tells Us About His Past, Present, and Future Alongside The Premiere Of “Come On”

Logan Bohbot, 17 year old production whiz, not only gave us his new original to premiere, but also sat down and answered a few questions as well!

Hey Logan, tell us a little about yourself; your background and how you became a producer and DJ.

Hey man, so I’m Logan, 17 from Connecticut and I have been producing for just a bit over 2 years. I started producing my freshman year in my basement in North Carolina (where I went to school for a year) and continued that all the way through today in Connecticut. I started producing and performing because I woke up one morning got on my computer and found a 3LAU mashup and thought to myself, this is pretty sick and looked up who he was and saw he was 20 at the time, not too much older than me. Then I ran into KapSlap, Audien, Danny Avila, Madeon etc and realized they were all around my age and if they could do it I could too and from then on I just studied everything to do with electronic dance music and here we are. P.S. I didn’t mention Martin Garrix because he wasn’t around at the time, but I love Garrix huge inspiration.

What has been your biggest achievement to date? What got you noticed initially?

Well luckily I have come across some amazing things but if I had to limit it down to one I would say being able to wake up every morning and make music that people actually listen to on my SoundCloud and even on iTunes and consistently show me love and support on my social media. At 17 everytime I recieve an email, tweet, facebook etc saying someone likes my music or downloaded my e.p. its something that I will never take for granted and is a huge achievement for me to build a fanbase of such loyal and supportive people! As for what got me noticed, I would probably say the support from all the blogs, fans and artists really helped push my name out there. Almost every blog I grew up living on have shown me support which is a surreal feeling.

You’re currently signed with Redlight Management and Circle Talent Agency, two very prestigious companies in the scene; how does it feel to accomplish this at such a young age?

I mean its an incredible accomplishment and feeling. With both places being so prestigious like you said and honorable with such incredible lineups just to know I am apart of that is something I will always live with. I never thought I would be able to call those places my home but the fact I can is just something I will never wrap my head around and something I am forever grateful for but yet just another factor that will motivate me to work harder but this also should motivate every other teenage producer out there that if I can do it, they can too. It turns out a lot of my fanbase are producers as well and it just goes to show age is just a number and doesn’t limit your skills. With that said, I see a lot of artists (of all ages) get signed and then become cocky and ignore all social media interaction with fans and that is something that I never have done or will do, I absolutely love and encourage everyone to reach out to me producer or not. 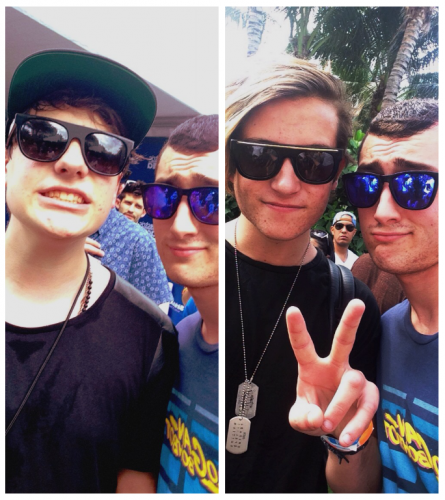 What have been your biggest opportunities as far as live performances go?

I have had some awesome shows in my past, and even more in my future. I opened for Hardwell and Audien at Pacha NYC last year which was probably the biggest show, but then I also was able to perform along side DaDa Life, Hoodie Allen, Ookay, Luminox, Basshunter, YONAS, Basic Physics, etc all in my past, thats excluding some of the shows I have headlined too. A lot of these shows have been at some awesome venues too like Pacha and Webster Hall which is awesome to think about the history in those rooms.

Do you have any upcoming projects or collabs that you are particularly excited about?

Well I won’t jump the gun and say anything yet but I have a lot of projects I am bouncing between including some collabs with artists who are tremendously talented. Some of these tracks are of a different genre or style which is cool for me to explore those grounds and become more musically diverse. I am REALLY excited to release some new music !

Lastly, can you tell us a little bit about what you’re premiering through us today?

Of course, so this is a new original I have been holding on to for a while. It’s a big room track, with a huge drop that is going to be great for festival season and a lot of live shows that I have lined-up but also really cool for headphones as well.