The EDM Industry Is Worth $6.2 Billion

On May 21, 2014, Ibiza’s IMS issued a new report that broke down the industry into its many components and measures their worth. The report includes revenues from major festivals ($1.03 billion), Las Vegas clubs ($800 million) and other global club events ($2.4 billion), DJ software and hardware sales ($360 million), DJ earnings from other sources ($60 million), streaming/video services ($600 million), and the total value of music streaming services such as Soundcloud ($140 million).

Out of the $6.2 billion, revenue strictly generated via the actual music, wether it be from music sales or music streaming services, represents a mere 22.5% of the total industry worth; hence the recent boom of EDM festivals in music industry; it’s where the money is at.

The EDM industry is booming. People like Calvin Harris, Tiesto, Avicii, and David Guetta have been pulling millions upon millions each year for quite a few years now, and they’ve been in a special tier of their own; up there in the $20m+ club (check out a list of the highest paid DJs here). Recently, however, young artists such as Hardwell, Zedd, and Nicky Romero have been showing impressive growth rates in terms of social media. Hardwell in particular has been pulling impressive number as of late — as much as 70,000 fans in a single day during UMF, actually. It’s no secret that EDM is the new pop; we can only wait and see how the industry further develops.

Check out more information via the pie chart down below. 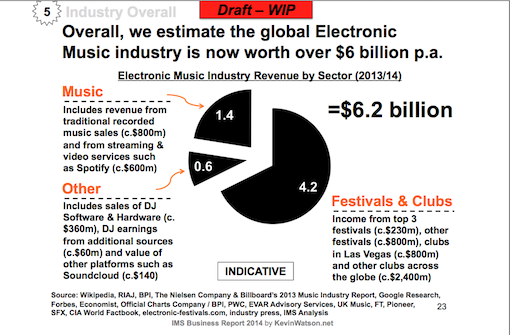