Shifting the Spotlight to Females in EDM: Carmen Rainier

Shifting the Spotlight, which aspires to highlight the talented women in the very male-dominated electronic dance music industry,  is proud to present our next female artist in the series, Carmen Rainer of (We Are) Nexus. Hailing from Chicago, Carmen Rainer works along with DJ/Producer Nick Gunn as the vocalist and lyricist for (We Are) Nexus.  She has a long history with performance as well as music, and has some very unique inspirations that influenced her throughout her career. With Gunn’s production skills and Rainer’s adept lyrics, (We Are) Nexus has already attained tremendous accomplishments. Be on the lookout for their newest track Shamelessly dropping soon, and check out their It Feels So Good EP as you scroll through what she has to say!

I first showed interest in music as a child. I played the cello (which was short lived), was in choir, and
auditioned for every musical I could. Acting won out during my teenage years so it feels good to be
back in music now as I’ve always had an inclination for singing and performing.

Who are your greatest musical inﬂuences?

Okay don’t judge me for this answer… Garth Brooks. I was obsessed with him and his music in high
school. I can still sing almost every word to every song he’s ever written, something that baffles Nick.
His inﬂuence on me, looking back, is his sense of showmanship. As an actress at that time, I would
watch and study his amazing ability to engage with the crowd so personally even though they are tens
of thousands of people deep. That’s something I want to take with me onto stage when I perform.

My musical partner, Nick Gunn, got me back into music. We worked on another project musically
together before and then began working together in business as well. So out of this relationship sprung
(We Are) Nexus, and the rest is history! 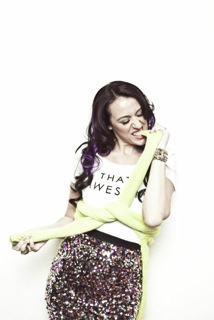 Nick, who has been producing forever now, is really the hands-on producer between the two of us. My
ofﬁce is in the studio with him, so I am always in and out or sitting there with him listening, commenting,
collaborating, etc. My favorite song is probably the one we just wrapped which we’re anticipating re-
leasing in June. It’s called “Shamelessly.” It was one of those songs that just ﬂowed, it just came to
be so naturally. It took like two weeks to produce from start to ﬁnish, which is quick for us. Vocally and
compositionally it’s more complex than our last release, and I just feel like we are constantly growing
and improving more and more each day, each song.

A woman named Joyce Coombs was my mentor growing up. She was my baton twirling teacher. Yes, I
twirled baton… During practice, if she ever heard me say the words “I can’t,” she would have me do
whatever it was I said I couldn’t do three times before letting me go home. She taught me to not be self
limiting, that I can do anything I put my mind to, and to watch my words. Things like that stick with you.

At this moment, Krewella. They are from Chicago, which is where I live and where Nexus was formed,
so to see someone lay down the same roots of their career where I am, to watch their path and
progression, is really inspiring. They literally started in the same place I am, they rehearsed in the same
studios ours is located in, and by coincidence I study under the same vocal coach. Also, they are so open
about their experience as artists, the highs and lows, they wear their emotions on their sleeves and
they work their asses off. They’ve got tenacity, which I admire!

Each is so unique. Can I say both?! Obviously from my background in theatre I love being on stage
and performing. I love the interaction with people and the sense of creating an experience that I get to
share and be apart of. But then the studio is just so intimate. There are no lights, no crowd, it is just
you, a mic, and your voice. Who doesn’t love those moments!

Anjunabeats Volume 11 Is Out Now!