Behind The Music with The M Machine at Hard Summer 2014

by Taleen Bedikian
in Interview

This past weekend, over thousands of fans attended HARD Summer Festival, which was held at Whittier Narrows Recreational Park. It was new, spacious, and rather dusty in comparison to the previous years which were held at LA State Historic Park. With a new location, and a diverse lineup, HARD Summer 2014 showcased a seemingly limitless amount of genres. DJ Snake, Jack U, Baauer, Dillon Francis, and Flosstradamus delivered an eclectic mash of big room, electro, trap and hip-hop on the HARD and HARDER stages while Danny Daze, Breach, Louisahhh!!!, Cut Snake, Tiga vs Audion, Etnik, Bones, Seth Troxler took refuge under the Pink, Green, and Purples tents, unveiling a barrage of  techno, tech house, deep house, and garage.

Over the weekend, I had the opportunity to sit down and talk to Saturday’s kings of the Purple Tent, The M Machine. Andy, Ben, and Eric elaborated about their creative and innovative productions, their influences that build upon their creativity, and news about their forthcoming album.

How would you describe your performance to a fan that has never seen you live?

The M Machine: “It’s a journey through a lot of different styles, a lot of different BPMs and tempos. I mean we do all of our own music and it’s a very visual experience and it’s very cinematic. Sort of the idea is to transport you between a lot of different worlds for each little song and each, little musical frenzy we give out. A big story that pulls everyone in a very cool and immersive way.”

How do you guys work as a team when performing live?

Ben Swardlick: “Andy is performing the visuals. He creates and performs the video show for us. Eric does all the mixing. He is mixing tracks, also live vocals and my live sets and samples, which I do on the other side, and we all three are singing as well.”

How do you work as a team behind the deck?

The M Machine:“When we start and pursue our music, once each of us gets 60 – 75% – whatever it is, then we all come together in the studio and kind of take that last 25% of it.”

You guys are in the process of making an album, has the creativity process changed when you made Metropolis 1 & 2?

The M Machine: “The new sound is just as all over the place as Metropolis – the music expanded a lot of genres and a lot of BPMs, but it was very cohesive and was rooting dark, cinematic story music – almost and the new stuff – is not like we don’t have some dark-techno-y stuff but it’s a lot brighter and fun, more just about having fun. Metropolis was so serious but our new stuff that we are writing, you know…some of it’s about love, partying, breakup, or just having fun and dancing. Just real world stuff.”

Any collaborations with this album?

The M Machine: “Not yet but certainly a possibility.” 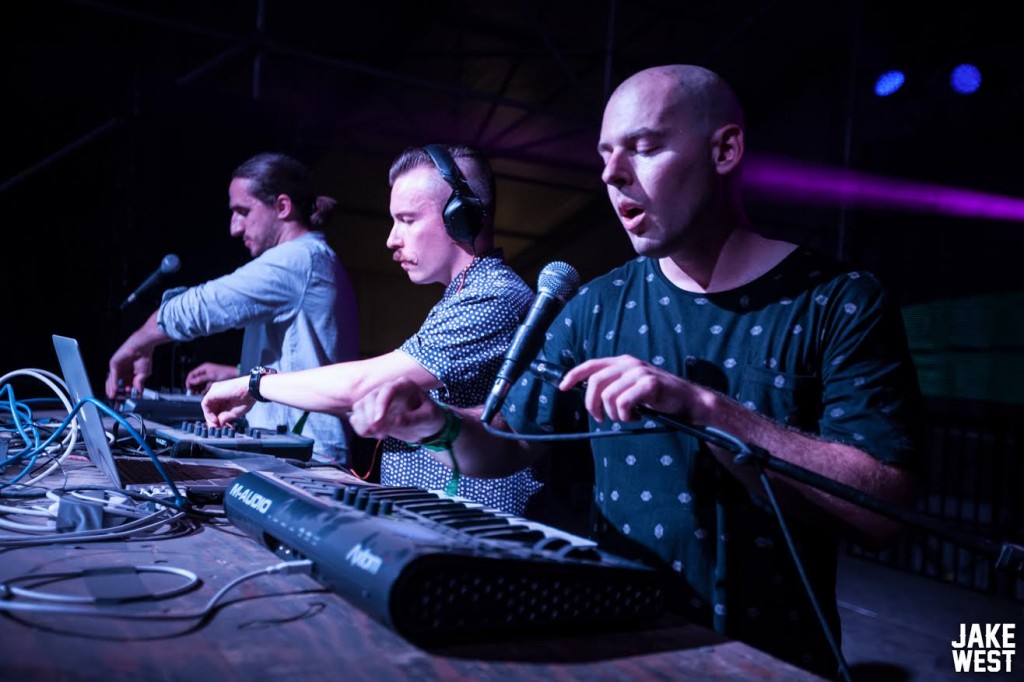 The sound you guys deliver is very unique & fresh; who or what are your major influences in creating this sound?

Andy Coenen: “I think the biggest influences recently is Radiohead, David Bowie, and maybe before that was Deadmau5 – a big techno kick.”

Eric Luttrell: “When I tend to listen to music it’s a lot of old 80’s music like – a lot of old electro stuff from the 80’s. Depeche mode, Duran Duran, even Wang Chung – I fucking love Wang Chung. Some of it’s kind of 80’s influence or some of it is more techno or like what the Dirtybird dudes are doing these days.”

Ben Swardlick: “I really love the Gorillas; definitely one of the coolest projects of all time and I like it how varied it is.”

After our conversation about their music, I had the opportunity to catch their live set inside the Purple Tent at 9:45 PM. With all of their words and explanations embedded in my memory, I watched their live performance and appreciated the message, rather a story line they delivered with the visual and musical content. The M Machine is an act that truly showcases a LIVE performance, which in turn creates a unique and unforgettable experience for every attendee.