Zedd recently took to Twitter to share with his fans some troubling news. The super star DJ and producer who was prominently featured in Forbes Richest DJs of 2014 has apparently been diagnosed with a sudden hearing loss in his left ear. Hearing loss is possibly a DJ and producer’s greatest fear as it can heavily impact their ability to create and perform music. At this point it is still unclear whether this will be permanent or only temporary. 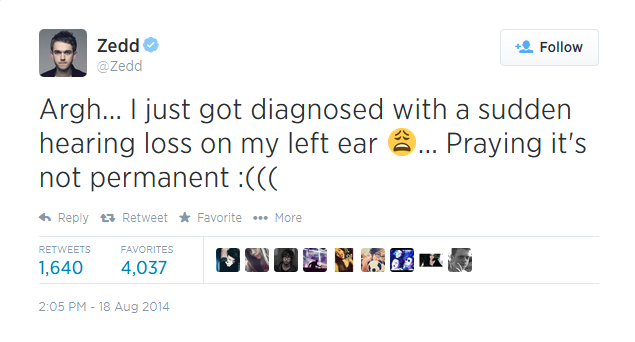 Steve Angello is another producer and artist who is also suffering of hearing loss, which is a big reason as to why fans never see the DJ with headphones while performing. We wish Zedd all the best and hope that this serves as a reminder to us all that taking care of your hearing, especially when exposing yourself to such loud noise and high decibel levels, is incredibly important.
Image Source

F*ck Your Ice, Deadmau5 Donates Thousands of Dollars to ALS