The day is almost upon us, the highly awaited debut album by famed duo Knife Party comprised of Rob Swire and Gareth McGrillen is just a month away. Titled “Abandon Ship”, the 12 track LP is slated for release on October 27th and with that in mind Rob took to his medium of choice to share the tracklist for the anticipated release. Out of the 12 songs, Resistance, Boss Mode and Begin Again have started circulating the web with the first already available on iTunes.
Begin Again was actually leaked early and can be listened to here if you’re interested: Click here
Boss Mode was previewed by Rob not too long ago and can be listened to here: Click here for Boss Mode

Below is the tracklist for the album, let us know your thoughts! 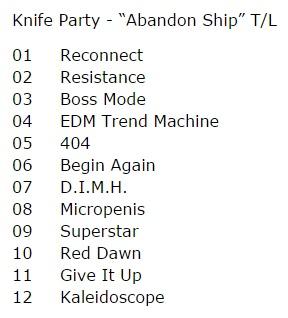 Club Sets Vs. Festival Sets: The Artists of TomorrowWorld Weigh In [Interview]