Music is Subjective, Get Over It.

What ever happened to the phrase “beauty lies in the eye of the beholder”? What does this phrase mean to you? Well, a lot of people use this phrase when they are talking about various forms of art. Music is beautiful, right? And it is a form of art. So what does that mean? It means that music is subjective.

The subjectivity of music is pretty much common sense, but for some reason it has recently popped up on social media more times than I can count. Any producer reading this might recall a time when they sent over music to another artist or to a blogger and that person responded saying, “Dude this track is amazing!” That same day another person from a different site commented on the track and said, “This sucks. There isn’t enough energy.” If you are on the receiving end of this situation then you might have said something similar to either comment. So who’s right? Everyone, of course. I’m right in my mind, and you’re right in your mind.

If you’re a producer, I challenge you to not get discouraged when someone doesn’t like your music. Yes it sucks to hear that someone doesn’t like a product you have spent hours perfecting, but if YOU like it then that is truly all that matters. You have become a producer because making music is your escape, it’s your way of releasing your emotions. That is the beauty of art. Always listen to someone’s feedback and take their advice into consideration – mess around with a few things if you have to, but don’t feel forced to change something because it’s what someone else advised. You’re going to have haters in life so the only thing you should worry about is pleasing yourself.

Here’s a note to anyone who listens to music…

Two weeks ago a good friend of mine tweeted, “If you’re arguing over taste in music no one ever wins. An artist can seem talented to some person but sound like trash to others.” 100% accurate. Let’s take for example the recent Twitter drama with progressive-house producer and mashup artist, 3LAU. Despite very strong comments from both sides of the argument, the overall theme is that a couple of people in particular publicly hate on his music. Fine. You have the right to your opinion and Justin (3LAU) also has the right to fight back. There are a lot of people who like his music and there are a lot of others who hate it. So whose opinion wins? Not mine. Not yours.

Another example would be Seth Troxler hating on more mainstream acts such as Avicii. This is older news, I know, but is still relevant to this article’s subject. I have a lot of respect for both artists and enjoy listening to their productions. Sure Seth might have a world of knowledge when it comes to producing, but why should his opinion trump your opinion or mine? He probably knows more about music than a lot of Avicii’s fans, but he might not know more about the personality and values of Tim (Avicii) than his fans. He and other artists might insist that Avicii’s songs are poorly produced, but what if someone else thinks that his music has a lot of emotion behind it? Just because someone’s music doesn’t speak to you personally doesn’t mean that it might not speak to someone else. So who is right for loving it or hating it? Neither because music is subjective. So why argue? Isn’t it unnecessary…a waste of time?

Music speaks to people in different ways. I love trance, progressive-house (newer and older styles), and melodic dubstep a lot. Something about a beautiful melody just hits me hard…makes me emotional. For others, those genres of music do absolutely nothing for them. And that’s FINE. Don’t get into fights about whose music is amazing and whose isn’t because guess what? No one will ever win. I’m guilty of this too and I’m sure we’ve all argued over music at some point in our lives. You’re entitled to your opinion, sure, but don’t start arguments with someone else and tell them they are wrong for liking a track because that’s not true.

When you listen to music, you should try to look at it from a holistic approach – the quality of the actual production, the inspiration/story behind it, and does it actually reflect the artist’s persona? Learn everything about a song that you can before judging it. Rather than wasting your time arguing and getting no where, you should spend this time educating yourself on a certain artist or song. Same goes with people. You think you know someone and you make judgments, but if you take a few minutes to learn about his/her story then you will find out you probably knew very little.

Now, like every other Op-Ed known to man, I’m sure I will be getting my fair share of mixed reviews. But guess what? That is FINE because this too is subjective. 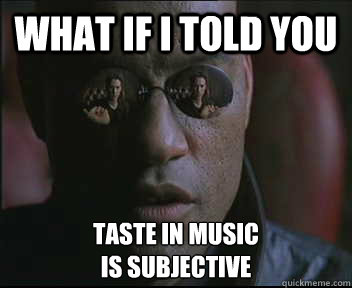