The M Machine Trio Will Become A Duo

Just four hours ago, it was announced on their official Facebook that Andy of The M Machine will be moving on from the group.

For the past six years, The M Machine has been a bright light in the experimental house scene, with such radically diverse EPs as Metropolis Pt. I/II, Promise Me A Rose Garden, and most recently, Just Like.

I first saw The M Machine back in 2012, when they still had the large LED ‘M’, and it was a magnificent show. I still have a signed poster from them framed on the wall next to my desktop at home. The live vocals, DJing and synths were on par with many of the top DJs/producers at the time, and they only continued to grow as a group. I saw them again last year and every time they played an older song like “Faces” or “Glow,” I welled up inside with glorious pride and belted my heart out along with the song.

It’s a sad day when any member of a beloved group leaves, as has happened recently with Modestep, Dirtyphonics, or Norin & Rad, but we must always remember that there is a reason to these things. As much as music is a passion and craft for many of these individuals, there are likely other interests, as well. (In the case of Thomas from Dirtyphonics, it was art.)

We wish Andy all the best in his endeavors.

A message from Andy to our fans:

For the last six years I’ve been the luckiest man alive – I’ve gotten to travel the world with two of my best friends and make beautiful art together. It’s an experience very few people get to have, and I’m grateful every day to everybody out there who helped make it possible. To everyone I met along the way, and to everyone who ever came to one of our shows or listened to one of our songs, THANK YOU. From the bottom of my heart.

The truth of the matter is I never thought I’d get to be a musician at all, let alone do it for six years. For those of you who know me well, this probably won’t come as much of a surprise, and for those of you who don’t I’d like to give a quick explanation – I’m moving on from my role in The M Machine to pursue my love for technology. I’m back in school for a bit, then who knows?

Eric and Swardy are two of the most talented and amazing people I’ve met along this crazy journey, and I’ve got no doubt they’ll continue to do special things along with all the friends we’ve made along the way.

You can still catch The M Machine on their “Just Like” Tour, beginning tomorrow in Chicago. 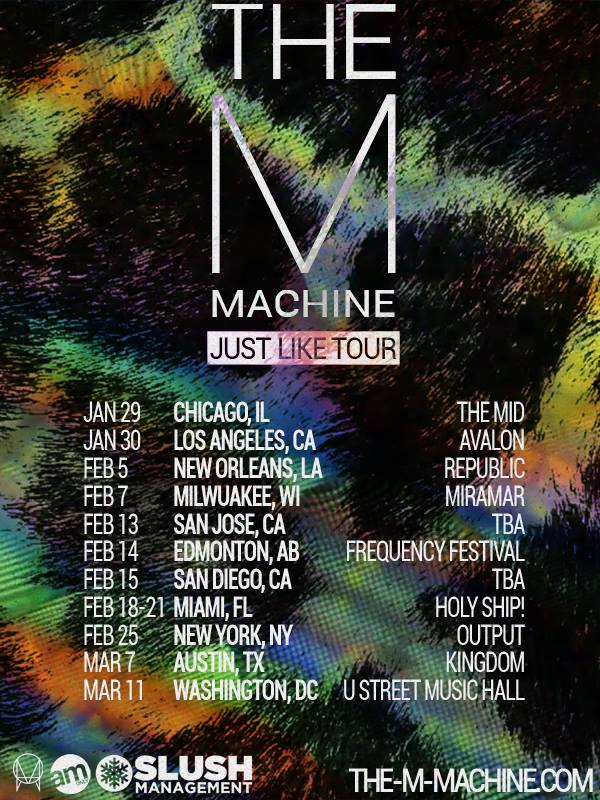