It’s no secret that Hardwell‘s ever-expanding record label, Revealed Recordings, is at the forefront of some of EDM’s biggest and most listened to releases in the scene. Founded back in 2010, the label has helped foster such colossal acts as Dannic, W&W, Fatman Scoop, Faith Evans, and Tiesto. With artists like these on the roster, it’s easy to see why their subsequent fan base has continued to expand worldwide during the 5 years since its inception. To celebrate their 5th anniversary, and give back to the listeners who have made it possible, Revealed has decided to release a very special compilation album, allowing the fans to decide on its content.

On their website, Hardwell is giving listeners the chance to create their very own Revealed Top 100 list in order to narrow down the choices for the album. After logging in through Facebook, fans are able to comb through the list of over 200 tracks and find their personal Top 5. Once the selections are confirmed, they will be entered into the pool with the rest of the voters and tallied up to see what the public believes to be the best of the best. As an incentive for casting a vote, Revealed is also offering a raffle to win a one-of-a-kind merchandise box and two tickets to any Revealed event of your choice.

Voting has begun as of yesterday, February 26th, and will continue until March 20th. Be sure to cast your vote and cross your fingers for the raffle prize! It is surely one you don’t want to miss. Check below for the community’s current Top 5 picks. 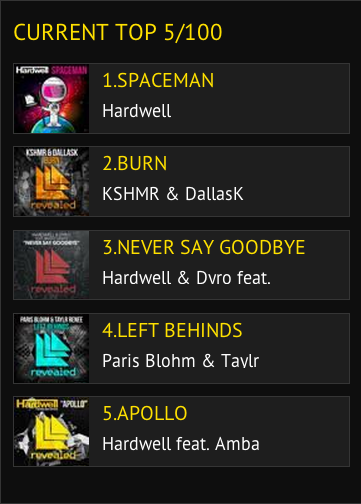