The Cost Of A Night Out

Going out on the weekends and participating in your city’s nightlife can be both a memorable and costly experience. In the heat of the moment, money often becomes no object. To some of the most involved event-goers, the biggest fear and subsequent source of spending is the idea of letting the night come to a premature end. Many times, whether at a bar, club, concert, or party, the various costs of things like food & drinks, tickets, and transportation seem to morph into something other than reluctant purchases. Especially when under the influence, as is most likely the case, using money to keep the party going feels like a victory, something to be conquered as if the night is subtly working against you and trying to stop you from having a good time. If you can muster up the willingness to shell out more and more cash, it feels like you are surmounting some sort of obstacle (maybe your own common sense and frugality?). Even though a lone moth might flutter out of your empty wallet at the end of the evening, if you were able to see the show, get wasted, feed yourself, and get rides to and from where you needed to be, the experience feels like a success.

One of the hardest parts of returning to your sober, responsible self, however, is remembering all the transactions from the night before. Especially if you were part of a large group, there’s no way to recall the split checks, drink count, Uber driver tip, or promises made to “pay you back tomorrow, man.” Luckily for us, Eventbrite has taken out some of the guess work with their recently posted study made over the course of a year, focusing on the spending habits of nightlife enthusiasts from six major U.S. cities. From February to December of last year, the organization analyzed data from more than 10,000 events that ran within the time frame of 6 p.m. to 4 a.m in the cities of Atlanta, Chicago, Los Angeles, San Francisco, Austin, and New York. They then surveyed upwards of 4,000 attendees of these events, making sure to understand the spending trends and preferences for their late night escapades. Here are some of their findings: 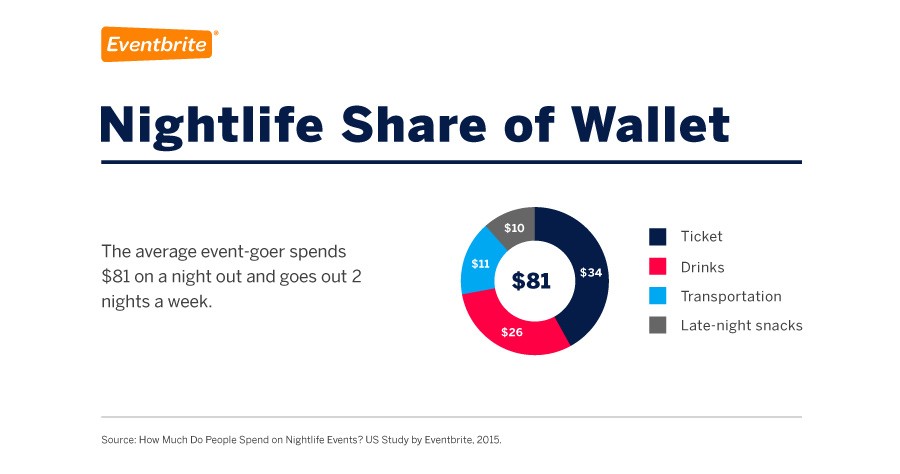 In this day and age, it’s no shock that the price of event tickets overshadows all other purchases made during the night. With the average price of show tickets in NYC at $34, ATL at $28, and SF at $20, the bulk of attendees’ average nightly spending (seen above at $81) seems to always be centered around the event itself. Next highest is the cost of drinks, which Eventbrite claims are most often purchased in threes. 18% of people are known to buy five or more drinks, while only 6% stay sober.

As far as transportation goes, ridesharing services like Uber and Lyft have begun to trump cab-hailing as the number one after-party way to get home in San Francisco. They place second in Los Angeles, Austin, Chicago, and Atlanta, with only NYC favoring taxis and trains. Finally, late night snacks are seen to nearly equate with ride prices. 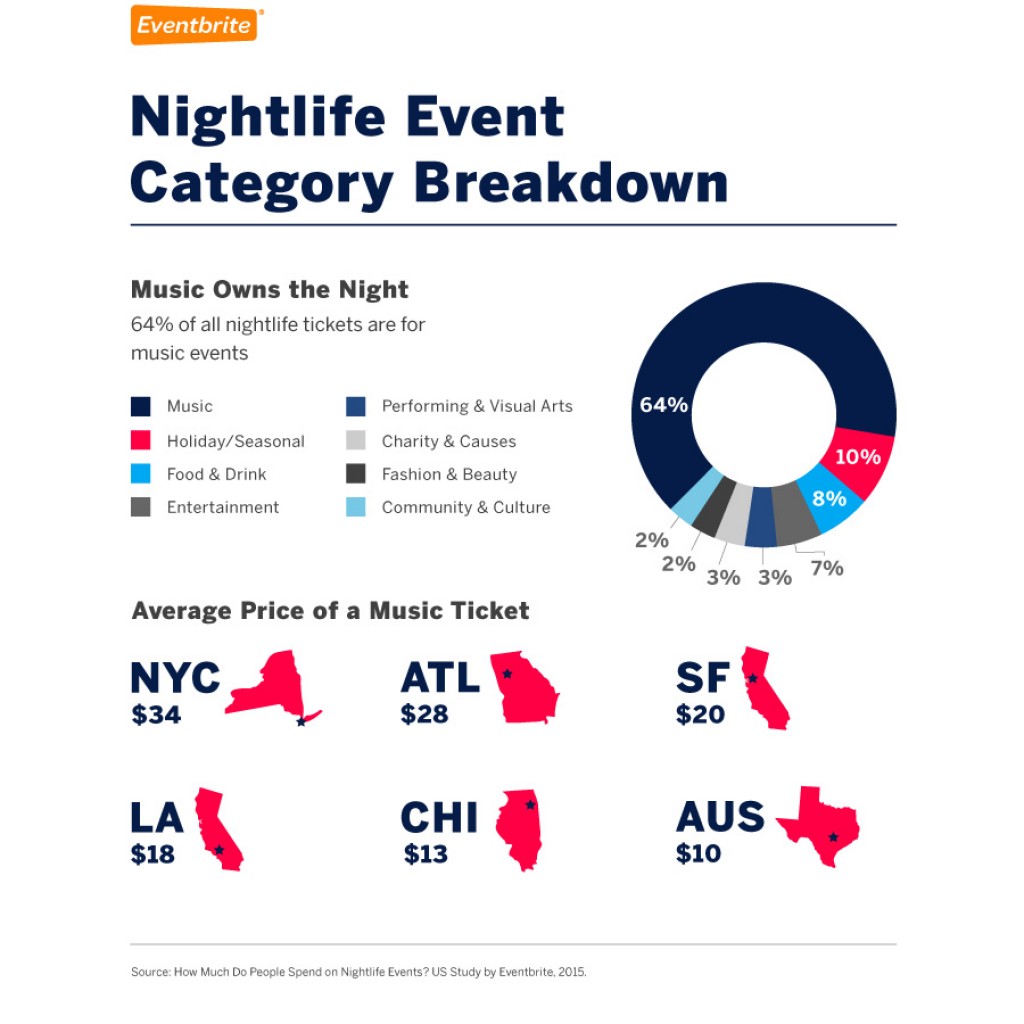 Music events dominate the nightlife trends with 64% of overall ticket purchases, while others like restaurants, performances, and holiday events fall into 10% or under. EDM and hip hop shows have seen the most revenue in ticket sales in all six cities, taking up 40% and 31% respectively.

Out of all the cities, Chicago takes the lead for the most average money spent per night out at $90. Atlanta and Los Angeles come as close seconds, all six cities possessing similar ratios of allocation. Chicago also houses the heaviest drinkers, with 27% of attendees consuming five alcoholic beverages or more on a typical night. Atlanta has the cheapest overall ticket prices at $10, as well as the most free events. It also saw the most ticket sales of any city at over 220,000 for the 11-month period.

Unfortunately for music fans like us, our passion is an expensive one. Getting the full experience by seeing a live performance goes hand in hand with a substantially thinner wallet afterwards. After understanding the costs associated with living the nightlife, it becomes an ongoing race between attendees and the involved businesses to outsmart one another into losing the least amount of money. As the popularity and accessibility of EDM shows and other live performances increase, sacrifices will continue to be made by both the hosting companies and the loyal fans.

For a complete look at the cities under Eventbrite’s surveillance, follow these links:

Skrux – My Love Is A Weapon feat. Delacey [Free Download]

A Look Back At: ‘Faith In Strangers’ by Andy Stott

A Look Back At: 'Faith In Strangers' by Andy Stott