Arguably one of the most original and fresh sound Trance producers to currently exist throughout the international Trance scene, the born again, Underground hero, Simon Patterson, has largely been one of the main reasons why Trance has slowly been unraveled towards the deeper and darker end of large scale dance music. Back in 2013 when he released his groundbreaking remix to Neelix‘s Leave Me Alone and his monstrous collaboration with Jordan Suckley on Vanilla, Trance fans knew that he had thrown caution to the wind in terms of fitting in the usual producer mold, and was attempting to create music that most artists were afraid of producing. His new sound was the culmination of fresh inspirations from many underground genres such as Techno, Progressive, Breaks, Trance, Psy Trance and more and his sonic direction took on a more decidedly Psy Trance route. Since his initial success with his ostentatious Open Up brand, (which focuses on the complete opposite of what most radio shows showcase), he has maintained massive success with a number of singles on Armin van Buuren‘s Armind label with singles such as Time Stood Still, Brush Strokes and Dissolve while his brand has been a grand mekka for featuring fantastic artists such as Astrix, John Askew, Sean Tyas, Blazer and more within a live setting. Now, Simon continues this hard backed success with a new opportunity as his abilities were chosen to be the main man behind the Ministry Of Sound‘s legendary Trance Nation series, which has boasted a number of famous artists before such as Aly & Fila, Lange, Above & Beyond and Rank 1, (with Ferry Corsten planting its roots with his brilliant System F alias).

Within Simon Patterson‘s twisted and warped soundworld, this massive collection of singles eerily snakes through the genres of Techno with artists such as Alex Di Stefano on his Trance debut of I’ve Got The Power and Jamie Walker with his crushing comeback single of Rojo, to Tech Trance with Tempo Giusto‘s chaotic single, Benzin, and Sean Tyas‘ Direct Dizko inspired single, Da Doo Da Dah. On the second CD, we take a look at his more Psy infused section with Astrix‘s cutting edge banger, Sapana, and Gaudium‘s face clipping single, Wrong Theory, before heading into his own productions with the aforementioned Time Stood Still, as well as his other Armind single, The One, with Trance vocaist, Lucy Pullin and his left field Perfecto Fluoro single of Whites Of Her Eyes. However, a fantastic mix compilation such as this one wouldn’t be complete without a slew of Trance exclusives, and Trance Nation has always been a great location to unveil the latest and greatest in Trance music. Exclusives in this compilation include brand new singles from Harmonic Rush on The Acid Test, Magnus on Neon Division and Sonic Element‘s Evolve, (as well as a cheeky new collaboration between Psy induced producer, Eddie Bitar, and the Middle Eastern heroes that are Fady & Mina on Shamiram). We here at Your EDM managed to grab a couple of exclusives from the pack including XGenic & Proyal‘s belter joint single, Ganges, as well as the illuminating, unreleased Simon Patterson remix of Hard-Fi‘s classic, Fire In The House, and we’ll be taking you through the journey that currently exists throughout each of these expertly produced tracks.

First revealed during Patterson‘s dominating residency at BBC Radio One in July of last year, this particular remix was one that he really worked his butt off on, as he stated during the world premiere that he was “up until 3AM working on this” and that he, “spent so much time getting it done“, (to get it just right, we assume). Remixes from the main are pretty hard to come by as he usually sticks with his singles productions for a very long time, but it was quite a nice surprise to see him remix this iconic 2011 single. Formed back in 2003 in England, the Electronic Rock band of Hard-Fi has been further pushing the boundaries of Electronic, Soul and Rock with a particular emphasis on their excellent vocals while marrying them closer together than ever with class singles such as Hard To Beat, Cash Machine, Good For Nothing and Bring It On. Within the normal production scene, it is QUITE rare for a producer to remix a rock track, but Simon is definitely the kind of artist who not only rises to the challenge, but also makes sure to take the time necessary in order to make each nook and cranny a perfect, musical ride from start to finish. This single was also supported by the likes of Armin van Buuren, (who himself stated that “the vocals are really big“), and Thomas Datt, as well as Trance champions such as Paul Webster, Giuseppe Ottaviani, Paul van Dyk, Gareth Emery and Above & Beyond. As the only exclusive track to be featured on the tamer A-Side of Patterson‘s edition of Trance Nation, his main focus is more inclined on the beautiful, melodic abilities that have stemmed from Uplifting classics such as Mood Swing and Always, and have recently surfaced with his remix to Coldplay‘s See You Soon. While keeping a main focus on cutting edge sound design and an affinity for a fierce, yet controlled disposition, his remix of Hard-Fi‘s Fire In The House is something truly unique; a track that connects the best of Trance with the different of Rock to produce pure magic that is rarely heard by today’s top contemporaries, and the journey that he has presented us is enough to move even the most stoic person to tears.

Ed Note: (No current preview exists at this time)

The unorthodox, Electro duo that has slowly transformed themselves into a rough and tough tag team Tech Trance force; the bone crunching talents of XGenic has always been a fan favorite from myself, ever since their bombastic singles of Collision and their unreleased number of Gigabyte, (as well as their massive single of Blaster, which received the patented Psy Breaks treatment by Spain’s own Blazer). Ever since then, these two have been on a roll with debut singles such as the ripping Ignition on Jordan Suckley‘s Damaged Records and remixes to Jase Thirlwall‘s Sicko and Jordan Suckley & Paul Webster‘s HELP!, (as well as unreleased reworks of Above & Beyond‘s Satellite and Galen Behr & Hybrid‘s classic, Carabella). Now, they team up with upcoming On Air residents, Proyal, on a brand new collaborative work entitled Ganges, which, by the sounds of things, is promising to be a proper romper through the realms of the Middle East, Uplifting and Tech Trance. The track is named after the famed Ganges River, (which is located in India and Bangladesh), and features that colossal, fat sound that currently exists in the productions of Photographer, Harmonic Rush and Allen Watts. With a hidden dash of Brian Flinn and Jonathan Carvajal thrown into the fire, Ganges kicks things off with a massive opening that slams hard in the ear with quaking basskicks, rampaging basslines and a minimized arrangement section that shifts the focus away from the melodic elements and instead aligns itself within its deep reserves of unadulterated power and strength. Throughout the beautiful breakdown and into the final release, this collaboration still manages to be expressive while keeping things savagely rough and edgy, even going so far as to keep the intensity of the beginning into the final release. The oriental dashes are definitely a nice touch throughout the lifetime of this piece and the smashing, almost overwhelming sound that these two command may quickly become a staple in many high end DJ sets.

The Ministry Of Sound‘s 2015 edition of Trance Nation, (mixed by Simon Patterson), will be released soon on Beatport, as well as iTunes, so make sure you grab this stuffed collection of hidden gems for a wild ride through the subversive genres of the deep and murky Underground. 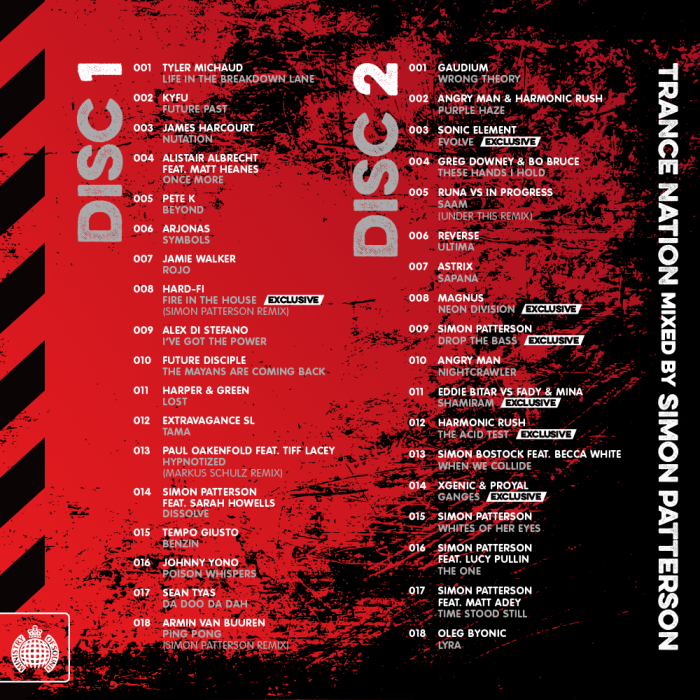