Along with sharing the same name, Eric Prydz and Los Angeles Mayor Eric Garcetti also share the way they run their respective houses: progressively. Fresh off of bringing Jay Z’s Made in America Festival to LA last year (which generated nearly $15 million in economic activity to the city), Mayor Garcetti has teamed with fellow Angelino Steve Aoki to present “LAoki,” a massive free show that will be held in downtown Los Angeles on May 16th. The concert isn’t simply a cake slinging block party however, all attendees (an estimated 5,000-10,000) must first sign up for more information on The Mayor’s Volunteer Corps (http://www.lamayor.org/volunteer_corps)

In addition to raising volunteer awareness, Mayor Garcetti also hopes LAoki will garner more local outdoor music events to the city of angels, “We go to these wonderful places like Coachella, or other festivals but we don’t have as many outdoor concerts as we should right here in the musical capital of the world… we have the best weather, huge streets, great parks and the revitalization of downtown, which is now one of the most dynamic neighborhoods in the world.” 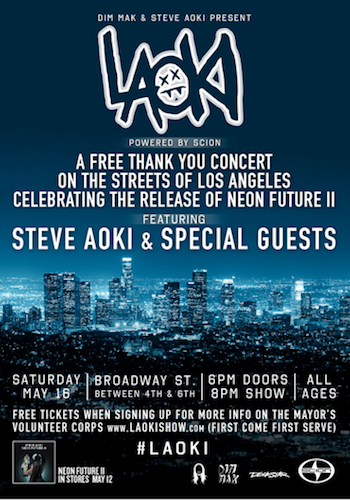 LAoki will coincide with the release of Aoki’s third studio album, Neon Future II, which is set to drop four days prior on May 12th. With the majority of the expenses coming straight from Aoki’s pockets according to his manager Matt Colon (the rest being sponsored by Scion), it’s quite evident LAoki means a lot more than album promotion for the Dim Mak CEO, “I wanted to do something big, not just the shows I always do, but something that gives back to Los Angeles, the city that raised me and built my career.”

Further Future Takes The Festival Experience To The Next Level

Further Future Takes The Festival Experience To The Next Level