In this age of technology and fancy thumb-work, none of us are strangers to the constant copy/pasting of YouTube links on different messenger apps. Platforms like Facebook Messenger and WhatsApp are easy and familiar to use, but the process of taking a URL from your browser and pasting it into the chat for the other person to click on and open up in a separate app is just time consuming enough for it to become a slight annoyance. This back and forth method definitely has room for improvement, especially when considering the hassle of trying to post multiple links. It seems we may have a solution, however, in the form of a new app called Music Messenger, created by a team of six Israeli engineers.

Deemed the “WhatsApp for music”, this app has already made a huge splash in the music-sharing market. Only a year after its conception, Nicki Minaj and Lil Wayne‘s manager Gee Roberson has signed on to the project with gusto and taken the quickly-rising company under his wing alongside David Guetta, Roman Abramovich, and Avicii’s manager Ash Pournouri. What separates this app from other sharing services is its enticing free to use policy. Unlike sites like Spotify or TITANIC…sorry, TIDAL*, Music Messenger understands that its global user base may not have the funds to invest in a costly service. Because they’ve received such enormous funding from artists like Tiesto, will.i.am and others, the team behind the app has been able to offer their product for nothing while still having enough to invest in a sleek design and promotion plan. 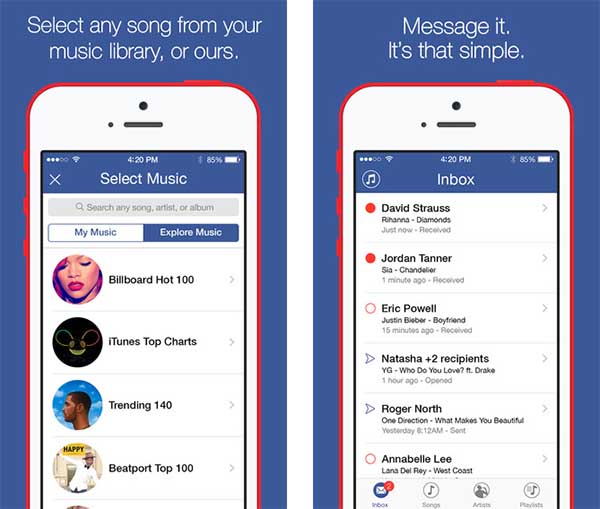 By choosing a color scheme and layout that looks very similar to Facebook Messenger, there’s no doubt Music Messenger seeks to be another staple app on every smartphone. With nearly a million new users joining every month, this goal does not appear to be out of their reach.

The app works like this: select the music you want to share, personalize the message for the receiver, and send it out. That’s it. Music Messenger allows you to import any of your music or choose from their own collection, which features top-rated playlists from nearly every streaming site as well as genre-specific selections if you already know what you’re looking for. Once you’ve picked a song, you can add a picture from your library to the message, as well as a short bit of text, just like Snapchat.

Music Messenger is undoubtedly one of the most inclusive, intuitive, and simple to use apps currently on the market, and is available for both iPhone and Android users.

Grab your copy on the App Store or Google Play Store here.