Tim Bergling, aka Avicii, began teasing the track’s release at the beginning of this week by counting down day-by-day using the track’s lyrics. Now Friday has come, and “Waiting For Love” has arrived… however, not quite as expected.

Back in March we reported on the song as a collaboration between the two house superstars, Martin Garrix and Avicii, upon its debut at Ultra Music Festival. However today the track was released with only Avicii’s name on the billing, despite Martin Garrix being provided with credit for production and writing. 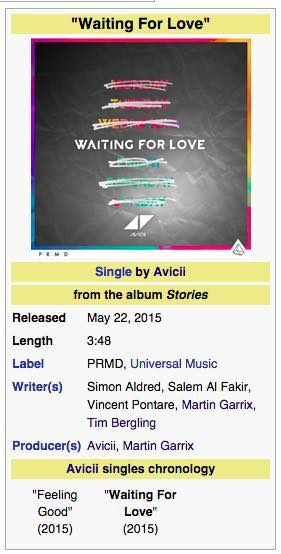 This clearly reveals Martin Garrix as a co-producer, which begs the reason for his exclusion from the track title. Avicii doesn’t typically collaborate with anyone, the last being with Nicky Romero in “I Could Be The One,” which recently went gold; but it’s hard to rationalize ever excluding Garrix, who is arguably the biggest rising EDM artist in the world.

That being said, Garrix is happy to support the track either way, as evidenced by his Twitter – which makes sense seeing as he’s surely receiving his share of the royalties.

One thing we are sure of is that this is a phenomenal single, and an exciting preview for Bergling’s upcoming album, Stories. You can check out the adorable, cartoon-powered lyric video below and download it on iTunes here or add it to your Spotify here.