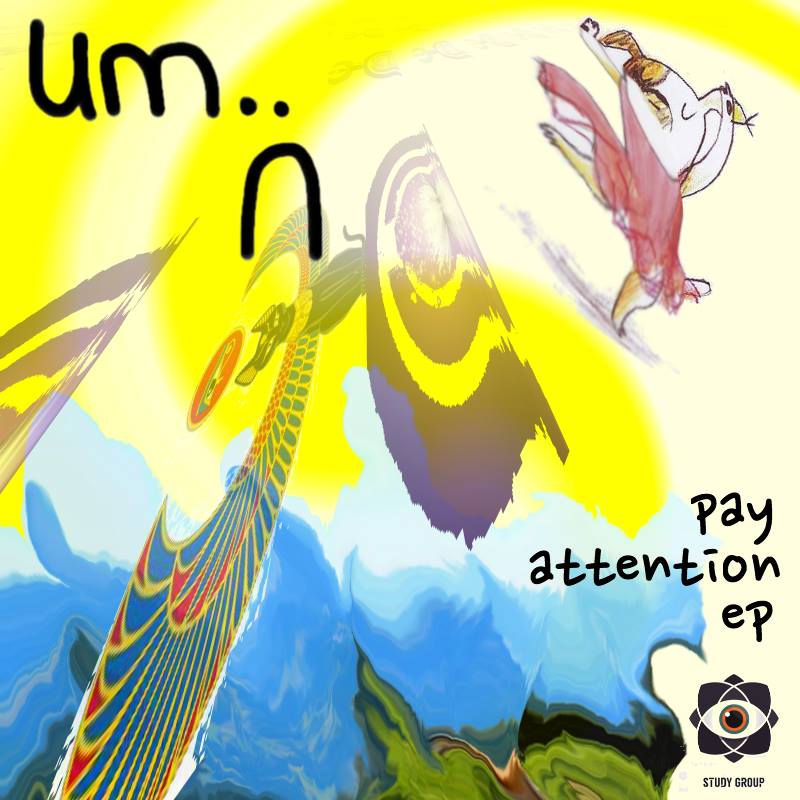 um.. release their debut EP with an original short story

For those of you who read my articles religiously (and I have to hope there are at least two of you), then um.. needs no introduction.

For the rest of you, um.. is duo Ben Bruce and Dylan Gold who make some of the weirdest good music you’ll ever hear. They’ve just released their debut EP titled pay attention and you’re going to need to if you want to catch all the little goodies hidden within. I asked um.. about the tracks on the EP, and they came back to me with “5 sounds you hear but don’t know what they are”:

Pay Attention:
– that chopped up drop at 1:28 is all the “DAMN SON where’d you find this?” sample

That’s Horrible:
– most of the sounds in this song are samples of us and our friend’s voices
– dylan’s world-renowned sloth impression can be found after he says “i don’t know what to do”

Birds in Paradise:
– the first two thirds of this song is mostly someone gargling
– the descending melody at 2:06 is a toilet

If you don’t pay attention, you’d miss all of these wonderful hidden gems. Additionally, I was able to ask them about their weirdest inspirations.

Finally, in preparation for the EP release, I asked um.. to write a short story, perhaps a paragraph or two, containing all of their track titles so far. What I received was the prologue to an epic tale that all at once lacks creativity and is also one of the most inventive stories I’ve read since I first opened up a word processor in 3rd grade.

It’s so great, in fact, that we’ve decided to host The Protagonist’s Journey on Your EDM as long as the story progresses. Check out Act I below:

the protagonist’s journey: act I

it was a sad day in the kingdom. never ending landscapes of limitless creative possibilities turned to barren pits devoid of originality and inspiration. bright eyed children brimming with imaginative visions of ingenuity and passion alike turned to cardboard cutouts, shaped by the false external desires force fed into their daily lives by the evil witch of Doteland. she had cast a spell over the land, an illusory incantation leaving the dotes lacking of any sense of self ­expression. but there was one..

protagonist was busy promoting his fire mixtape when he stopped to watch a group of pigeons eating baby carrots someone had left on the ground. they flew away.. A little ways down the road he saw the most beautiful woman he had ever seen and decided to share his beats with her.

“that’s horrible” she said after taking off the headphones and then walked away.

all of a sudden a small blur jumped from the nearby bushes, it was a dog, “protagonist! I heard your tracks on soundcloud. shit is fire.”

“thanks dog. where’d you learn how to talk?”

“i don’t know. shut up and pay attention” said the dog.

“princess tictac has sent me” he continued ” I showed her your tunes and she was like, ‘damn wtf is this?’ she sees something great in you. she has made it your quest to defeat the evil witch and free the land from this era of formulaic imagination and trap hats.”

“what does making music have to do with killing a witch?”

“that’s what I said man. doesn’t matter though. you are our only hope.” the dog said just before he spotted a small animal scurrying down the path and darted away barking hysterically.

protagonist was reluctant to accept any such task. he knew the dog was right: trap hats are terrible, but how could he be the one to defeat the evil witch being only a mere part-time worker at the local ice cream parlor and uber driver on the weekends? this time of conflict drew him to meditation. he retreated to his favorite cafe “birds in paradise” to assess his options and have some coffee.

on his way there, protagonist ran across mentor. mentor was an old man, small in size, but nevertheless seemingly wise. “young man,” he called to protagonist. “what is your name?”

“i sense confusion within you, protagonist. what are you running from,” mentor questioned as he ripped his e­cig.

“this dog just told me to go kill the witch and free the land from unoriginality and trap hats, but i don’t know how to do something like that.”

the man did not know what trap hats were given that he was almost 40 years old, but he understood the importance of the quest that had been bestowed upon him.

“sometimes we must do things that seem pointless or silly if it is something we truly believe in. the greatest rewards come not from taking calculated risks, but from taking an intuitive leap of faith. no one can dictate the right path besides you, protagonist.”

this allowed protagonist to reach within himself to discover a newfound source of wisdom and courage. he knew he was ready. mentor knew it too. “take this,” said mentor, handing him his e­cig, ” it is special in more ways than meet the eye. hold it close. it will serve you well.”