Gonna be truly honest here and say that HARD is one of my favorite promoters in the nation right now. From their incredibly diverse festivals and down-to-earth staff, they have the right idea in how to run a successful festival and brand.

A lot of that brand recognition comes from their incredibly imaginative promo videos for their festivals. Last year’s DotD promo featured a gigantic mustache chasing Valentino Khan around a city – and that mustache came on stage during Valentino’s set and shaved him.

This year’s promo for HARD Summer featured a collaborative effort between Dillon Francis & Porter Robinson called Spoon Ü, an obvious play on Jack Ü but hilarious in its execution.

And in following with that theme, as HARD so brilliantly does, they’ve challenged Apple create a new Spoon Ü emoji. Via a relatively new platform called Challeng (if you watch Silicon Valley, you’ll catch the joke), users can create “challenges.”

Challeng is the first crowdfunding platform for action. Our campaigns create social movements around public demands – whatever you want to see in the world, Challeng is the way to make it happen.

It’s different from something like Change.org in that change with this actually seems possible. 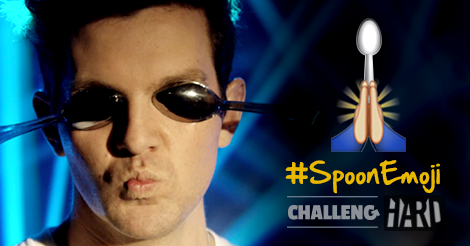 Getting back to the point, HARD is teaming up with the L.A. Regional Food Bank for this cause. With the way that Challeng works, the donations will only be made if Apple follows through on the challenge. If you’d like to give regardless, you can visit their website here. Though you will receive an email once the drive is over if Apple does not accept with the option to fulfill your donation, as well.

HARD has already kicked things off with a $1,000 pledge. Won’t you help out, too?