CRSSD Festival Returns For Fall Edition With Another Staggering Lineup

If you’ve been on the internet today and pay attention at all to social media, you’ve likely seen mentions of CRSSD Festival – hell, maybe you’ve even clicked on a link. Whatever level of interest you have in the new festival, you should have more.

In an unexpected move, CRSSD has announced a FALL edition of their fest, which made its inaugural debut this past March. The spring edition featured major indie and crossover headliners, with the likes of Empire Of The Sun, Chromeo, Thomas Jack, Justin Martin and more.

The fall lineup looks like an EDM connoisseur’s wet dream, to be quite honest. Legends Maya Jane Coles and Giorgio Moroder are on the lineup, along with 2015 stalwarts Jamie xx and Matoma. Most notably, perhaps, is the crossover lineup on the Ocean View Live stage, featuring The Flaming Lips, TV On The Radio, Big Data, and St. Lucia, not to mention Th3rd Brain’s star children Zhu & Gallant. And as if to say “Just for good measure…”, they threw in Bonobo and Ben Klock, too.

As we learned from spring, this is not even close to the full lineup. Expect some major additions before it all goes down in October. 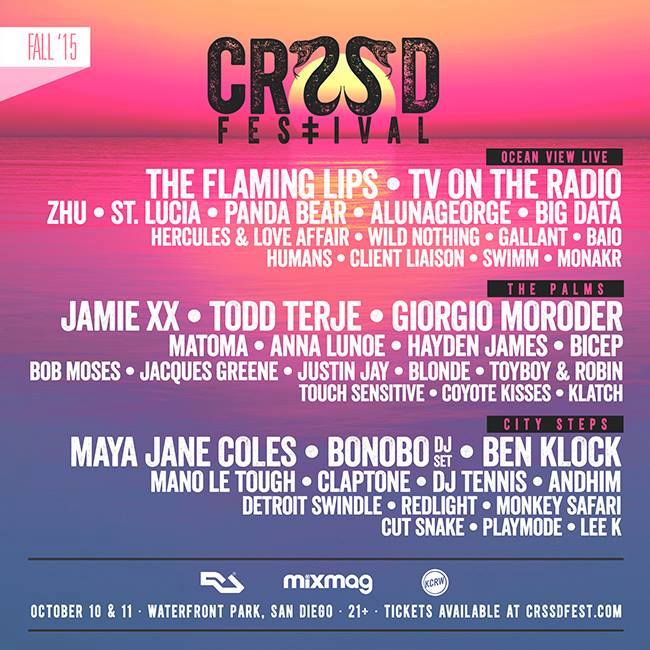