The Woman Behind HARD’s Viral Video Campaigns, Living In The “Den Of Death”

by Matthew Meadow
in Editorial, Editorials, EDM News, Featured, For the lulz, Interview, Worth Sharing

Agata Alexander is really fucking weird, and I say that in the most endearing way I possibly can.

Agata is responsible for a lot of HARD’s most viral videos, including the very special festival teaser videos like #StrawberryGang and this year’s Spoon Ü. Most people think that HARD has a whole writing team behind the videos, but you’d be surprised to learn that the videos are all conceptualized, written, directed and edited by Agata.

Agata grew up in Sweden thinking she was going to be a dance choreographer. “I studied dance in all of it’s forms for 12 years. I was really into making weird stuff to Manson, Nine Inch Nails or Aphex Twin while my teachers were forcing jazz hands on everyone; they were really discouraging so I quit.” She took up film making with no formal training and no idea how to get started, but she made it into film school in Sweden, graduated (I assume), and moved out to LA nearly 10 years ago.

Agata has been with HARD since the beginning – starting out as a camera operator, and moving up to editing the recaps.

I was editing a movie for another director, Kevin Kerslake and I told him I had this vision for the HARD trailers. I wanted to make them “a thing”. Kevin is really close with Gary so he said, “Alright, come up with something and I’ll tell Gary”. A few months later I was putting glasses and jackets on dogs, questioning my own sanity. That was the first Hard trailer I did.

This year’s subject involved a lot of moving parts and a variety of personas. Although Dillon Francis was technically the “star” of the production, several other producers such as Anna Lunoe, Chromeo, Mija and even Porter Robinson joined in on the fun.

Porter was great! I was a bit worried since him and Dillon were supposed to spoon each other. They ended up spooning for like 30 minutes cause we couldn’t get the crane shot just right…or at least that’s what I told them.

I asked Agata if she had any special method to her creativity. “Unfortunately no, I honestly just sit in a quiet room until I come up with something! It’s all rather boring,” she says with a laugh. Agata likes to adorn that room with a myriad of odd and crazy props and decorations in order to keep her imagination just as weird. She likes to call it the “Den of Death,” though the name has come to encompass her entire home.

The name came from the guys who played the Terror Mustache in 2014. “We’ve been getting together at my place every week, writing. My home is a bit weird I guess and it freaks them out … pussies. I always thought the infant embalming tool display was charming but I’ve been told that’s not the case. ”

It’s in that room that she’s come up with some of her best ideas, like the aforementioned Strawberry Gang, The Terror Mustache and Spoon Ü.

I wanted something summer-y and my goal was to explain that Jack Ü was a new thing and that it was Sonny and Wes together. The vision of Sonny in a strawberry head was that one thought [that kept coming back]. I was also inspired by Deadmau5 and by the Beastie Boys’ “Sabotage” video for this one.

For the Terror Mustache…

[I was] influenced by retro horror movies with giant crappy monsters and with a ’80s action hero twist. I met Valentino Khan briefly at a show and his mustache is the most amazing thing I have seen on a man’s face in the past 10 years. AT LEAST.

Gary hit me up and said to start thinking about DOTD ideas. I texted him back, “What if Valentino Khan’s mustache jumped off his face, became a giant monster (aka two normal dudes in a furry suit connected on the top) and terrorized LA?”

Gary was like, “Ok yeah let’s do that.” So I wrote that story.

A bit of Zoolander, a bit of ’90s MTV … The message in the spoon trailer was something I had thought about for a while. All the silly drama that surrounds electronic music can be annoying. Taste is one thing, I’d never argue with that, but how old is the “electronic music is not real music” argument getting? I’ve had friends say crap like that to me which always bummed me out cause I prefer to hang out with open-minded people. That’s where the inspiration for the trailer came from. I figured it would be funny to take on all those lame arguments and say “you know what, yes, you are right, let’s play a REAL instrument…like spoons.” Then the rest of the jokes kind of wrote themselves.

Spoon Ü specifically? That was just too easy of a joke. I think it was one of the first things I wrote down. I told Dillon I better get executive producer credit if Spoon Ü makes a song. His answer to that was “Fuck you, Agata!” hahahaha…he’s fired, obviously. Suing. 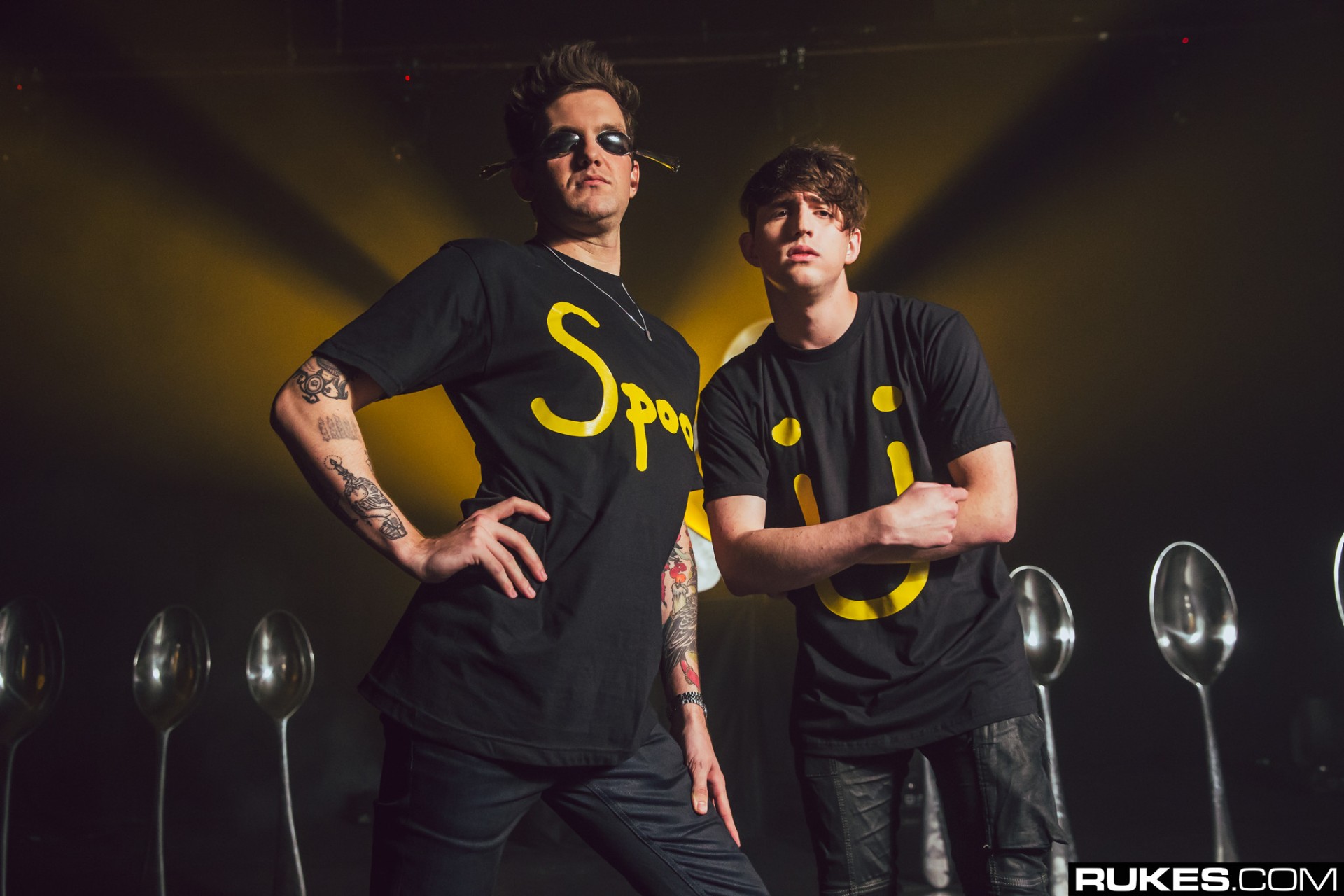 While Agata might be most well known for her viral videos and trailers, it would be foolish to think that they’re all she does. With years of interacting with producers, DJs and performers, she has cultivated lasting relationships with people that not only celebrate her weirdness, but embrace it. And she’s started her own company, too. I asked Agata what she’s working on currently, and you’ll absolutely love the answer.

It’s a short film with Dillon Francis called “Exit Through The Donut Hole”. It was supposed to be a music video for “I Can’t Take It” but we went overboard and made a 15-minute-long movie with Dillon dressed as a donut.

Cause you know, why not?

What I’ve come to learn about HARD and its fans is that it’s all about family and music. While the same could be said about Insomniac, and I certainly know people who would stake their lives on it, HARD is the fam that I belong to, and have come to know and love over these past four years. And Agata feels the same way, stating, “I do feel like HARD is my family, though, and I love working for them. ”

While playing dress up is certainly not discouraged, especially for Day of the Dead, it is not considered a main focus of the event. The music is the focus. And that’s why each and every video from Agata and HARD features prominent, popular and likable musicians – because at the end of the day, they’re gonna be the ones who come out and shake your hand after the show.

HARD Summer is August 1-2. If you haven’t gotten your tickets yet, sucks to be you, because they’re sold out. The rest of us will be raging at the Fairplex in Pomona.

If you find the opportunity to snag some tickets off some poor schmuck who can’t make it, do it.

If you’d like to support Agata Alexander, you can visit her website here or any of her socials linked below.