by Garrett Smith
in Editorial, Events

So this topic of EDM that we always talk about is getting big. The commercial mainstream is picking it up, and I don’t mean only music. You can hear a Grandtheft & Keys N Krates collaboration in a trailer for the Minions movie, and you can spot Martin Garrix’s “Animals” in the commercial for a Madden video game. Dance music is making its way into the realm of pop, and pop stars have begun to hop aboard the train like Justin Bieber, Usher, and more.

Billboard, a leading force in dance music, announced the lineup for their inaugural Billboard Hot 100 Music Festival. It will take place at the end of August with a lineup that most would dream they could see maybe half in their entire lifetime. The first two lines of the bill say it all. Leading off with names like Justin Bieber, the Weeknd, Jason Derulo, Nicki Minaj, and Lil Wayne, Billboard literally made a 13-year-old kids dream come true.

But for us, what truly is astounding is how big of a role dance music plays in this festival. Billboard has expanded their site and magazine with a dance division due to the overwhelming popularity of EDM. But, it was surprising to see Billboard take a risk and book so many huge dance acts with such a pop-heavy lineup. 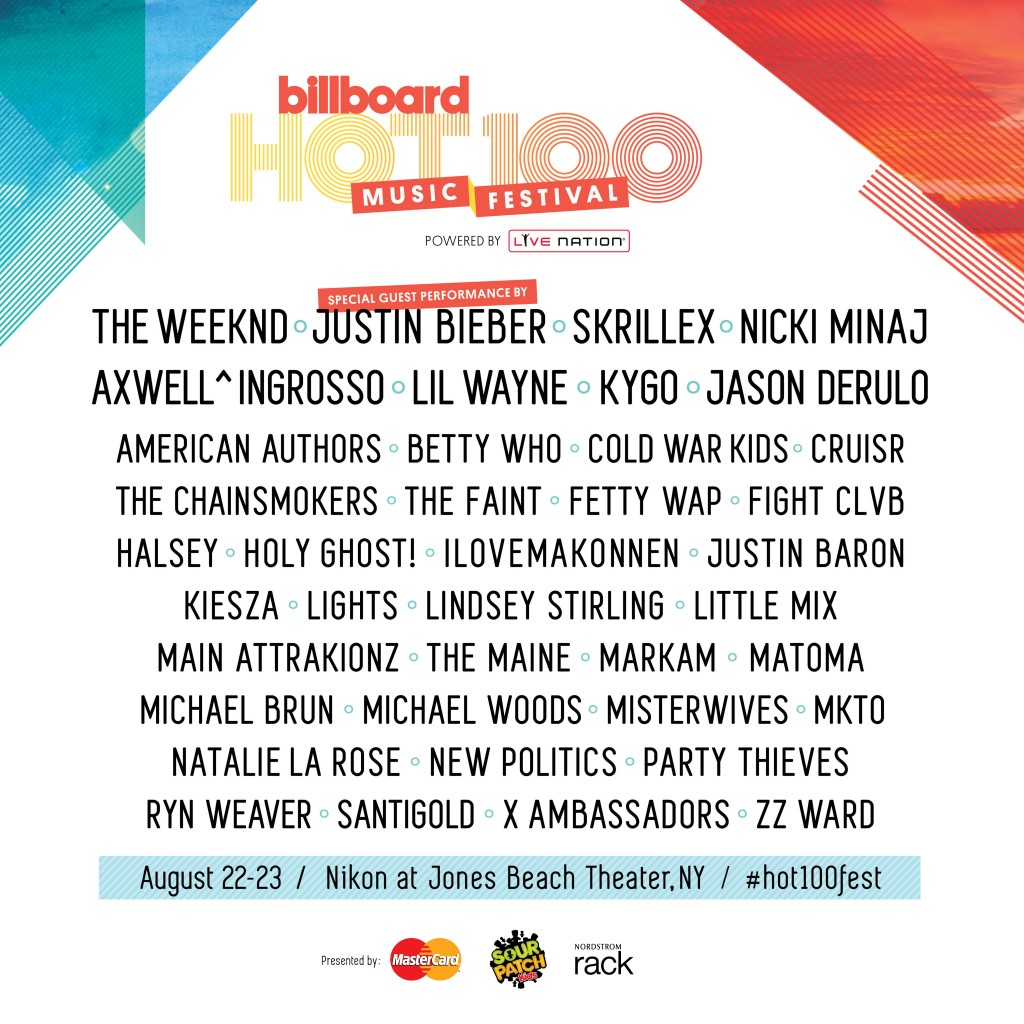 It’s clear to me that this festival lineup is the perfect example of dance music’s domination. First off, Skrillex is on the first line next to collaborator Justin Bieber and the David Guetta collaborating, Nicki Minaj. Who would have thought back in 2011 when dubstep broke that one of its pioneer would see himself next to the names of the world’s biggest artist. Kygo – who was a bedroom producer just over a year and a half ago out of Norway – is now one of the hottest artists on the planet and is being booked alongside Jason Derulo, Lil Wayne and two of the biggest names in EDM, Axwell ^ Ingrosso

When looking below the headliners, The Chainsmokers are a no brainer with their claim-to-fame “#SELFIE” and electric stage performance. The surprising names for me are Matoma, Michael Brun and Michael Woods. Not to say they are not phenomenal producers, but these artists are seeing themselves amongst ILOVEMAKONNEN, Kiesza, and Santigold who are all names that most would recognize from the radio. Maybe Billboard is predicting these guys could have a big break sooner rather than later? Who knows?

At the end of the day, Billboard is a curator on one of the grandest scales. They have a chart that tells the world exactly what are the hottest tracks currently on the radio. If dance music is making a solid mark on that lineup and some of their radio stars aren’t even there, that proves that EDM has just scratched the surface of what it could potentially amount to.

This piece is not to say “Hey! These guys are the next big thing,” but to demonstrate dance music’s ever growing presence in pop culture and how Billboard has played a vital role in facilitating that. The Billboard Hot 100 Music Festival has shaped up to be a phenomenal lineup, and is sure to blow expectations out of the water. It will take place at the Nikon at Jones Beach Theatre on August 22nd-23rd in New York.

Tickets are on sale so if you want to see one of the most stacked lineups of the year, head to Billboard’s first ever festival.

Deadmau5 Will Headline A Town Fair Along With Def Leppard, Carrie Underwood & More

Deadmau5 Will Headline A Town Fair Along With Def Leppard, Carrie Underwood & More