Who knew an ex-Oasis member could spark such controversy in the electronic music community? Noel Gallagher made headlines a few weeks ago by calling out Avicii, which the Swedish producer responded to with a defensive Instagram post. Leave it to deadmau5, EDM’s answer to the Muppets’ Statler and Waldorf, to chime in with a lengthy blog post supporting Gallagher’s criticism on modern EDM producers like Avicii and David Guetta.

Deadmau5 uploaded the post to his Tumblr account, his first activity on his page in three months. The producer summarized the common path to fame seen in many recent EDM producers, with such choice descriptions as, “so your banger makes some waves here n there… so you fuckin rinse it. shit.” Deadmau5 said he sees no harm in that aspect of the industry, but stated that he takes issue with the decidedly non-live DJ sets that a number of artists resort to for their performances. 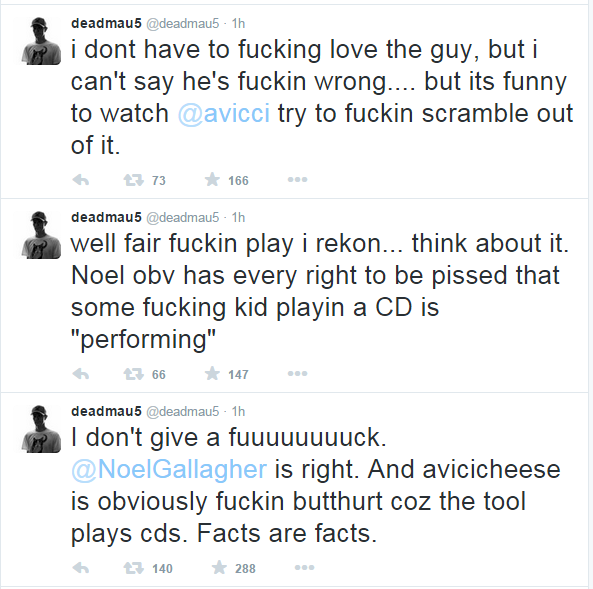 In typical deadmau5 fashion, the producer asked, “With all the resources you have attained in the past X years of getting to where you are now…. WOULD IT FUCKING KILL YOU, to be able to add some sort of modularity, performance, showmanship BEYOND putting a fist in the air, telling people to make noise, and or playing the top line on an invisible keyboard in the air to show the crowd “HEY! EVERYONE!  THIS LEAD GOES HERE! WATCH MY HAND.  IT GOES DOOT DOOT DOOT DOOT””

Deadmau5 finished his post with a call to action for fellow producers to integrate improved live elements, citing such efforts as playing live keys or MIDI, creating tailor-made and dynamic visuals, and adopting show-stopping production. Deadmau5 wrapped up the post by ultimately agreeing with Noel Gallagher’s criticisms of modern EDM producers. Given deadmau5’s new and improved live show, it’s clear that the producer means to set an example for many of his contemporaries.