The long descent into Haven Nightclub is killer. After being greeted by so many wonderful staff members, attendees must endure a lengthy escalator into the club. About as soon as they see the splendor inside the club, many realize that the build, like any good song, is totally worth it.

Except there’s a different entrance for myself and the EC Twins, one that if sped up, feels like a getaway heist through the kitchen and a private elevator before entering the side room of casino tables connected right to the dance floor. For Allister and Marc, this whole process is familiar, as they are no strangers to Haven. The towering twins soak in the crowd that is slowly coming to life now that the headliners have entered the booth. Immediately the dance floor becomes fuller with fans eager to get a good spot. Marc stands atop the decks to rev up the crowd, as Allister cues up the first track while the house lights focus on them.

It’s going to be one of those nights.

For the next two hours, the EC Twins slide up and down the musical spectrum. While many headliners admit to playing more bangers for “bottle service crowds” in cities like Atlantic City, New York, and Las Vegas, Haven has a reputation of being more open to different styles of music, leaving the EC Twins free to take more risks. The crowd sings along when they hear their “Wonderwall” bootleg and Alesso’s “Cool,” but I’m drawn more to their unreleased originals which are going over without a hitch. They are the perfect headliners for Haven – Marc wins the crowd over while Allister focuses on precision mixing. Every once in a while, the two fall perfectly in sync, as if their moves are choreographed. As the paper confetti sticks to their sweaty bodies, the pair refuse to let up, and close out their set with as much energy as they started, before handing the reigns back to the opener to take the still lively crowd out in style. 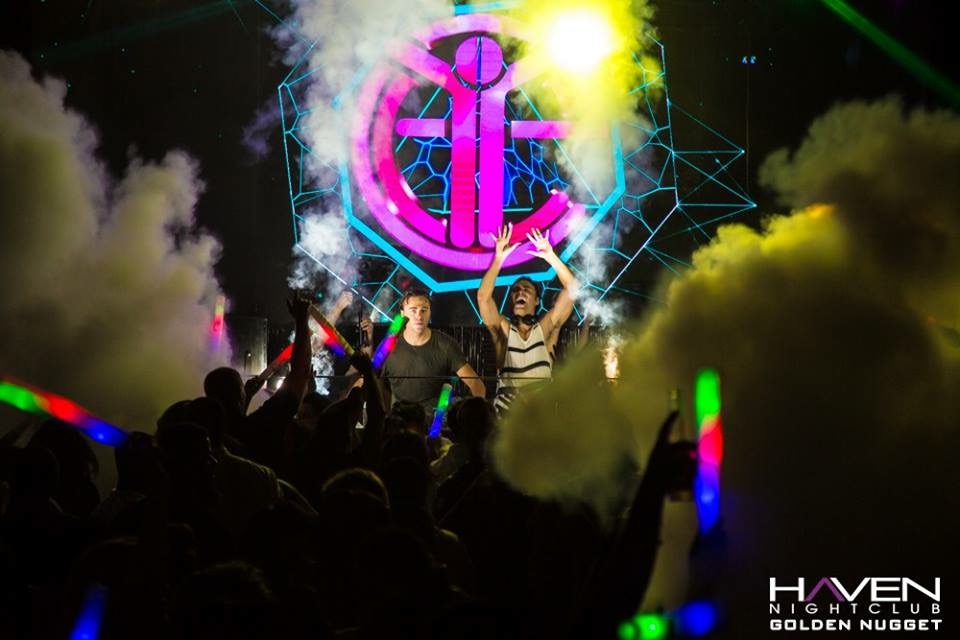 It’s hard to believe that I’m in Atlantic City, NJ watching this all go down, as it’s not really known for being a premiere nightlife spot. Most of the tourist location caters to either the elderly gamblers or families on vacation, but in the 2010s, two major changes help boost its stake in nightlife: Trump Marina was bought and renamed Golden Nugget in 2011, and Revel Resort and Casino opened in 2012.

Though clubs like mur.mur and Mixx at Borgata as well as the Pool at Harrah’s were still open, Haven and Revel were fresh takes on AC nightlife, but for very different reasons. HQ Nightclub brought the flashy Vegas scene to the East Coast, with major headliners like Above & Beyond, Tiesto, and Afrojack. Haven provided guests with an experience that wouldn’t break the budget. They attracted young patrons to the club not only with reasonable pricing and stellar customer service, but with a layout that was optimized for everyone to enjoy themselves, not just those who paid for bottle service.

However, Atlantic City’s resurgence suffered a major hit last year. After the meteoric rise and fall of Revel as well as three other casinos filing closing their doors in September, many wondered if the city could survive so many losses. It was in this moment that Haven capitalized and became Atlantic City’s top club. Instead of suffering the same fate as its competitors, Haven had some of its busiest nights yet, bringing in Borgore, Chocolate Puma, 3lau, Feenixpawl, and more.

“Keeping the Haven brand consistent has helped in the process of the Haven’s growth and success in the AC market.” — Meredith Godfrey, Director of Nightlife Entertainment

This idea has been proven time after time with their talent bookings. Whereas Mixx and HQ fought against each other for the biggest names, Haven went after artists who rarely played in the area to draw loyal fans to the club. The first summer of bookings featured Markus Schulz, Rebecca & Fiona, Bart B More, Dash Berlin, and even photographer KirillWasHere.com, the boldest booking and residency of them all.

But in case people were still unconvinced, Haven pulled the most badass move of all back in June. The club mobilized quickly and invited DJs from Beachglow to all play at their club after a thunderstorm cancelled the daytime festival. Project 46, Tommy Trash, Lost Kings, and Tony Arzadon all joined scheduled headliners Vicetone for a night that rivaled a pool party during Miami Music Week. Added to their “Summer of Sunday Nights” series with Yellow Claw, Dyro, and Dada Life, Haven currently enjoys four crowded nights a week this summer, which should be unheard of in a city that many thought couldn’t survive another tourist season.

Before you know it, the summer will be over, but Haven’s momentum will take them right through the rest of the year. As their impressive lineup continues to feature both rising talent as well as major headliners, it will be interesting to see who joins their roster next. Regardless of the talent,  dedication to making sure each patron has a night to remember will keep Haven Nightclub shining as the crowning jewel of Atlantic City attractions.

To learn more about Haven’s August lineup (which includes Nicky Romero and The Stafford Bros.), visit their website.

Skrillex Turns The Tables On Paparazzi, Interviews Him Instead

Skrillex Turns The Tables On Paparazzi, Interviews Him Instead