Diplo Says That EDM Was Created As A Marketing Tool, And He’s Right

Diplo, and other producers, occasionally host times when they let fans ask them questions via Facebook or Twitter. Anything goes. The more fans an artist has, the less chance your question will even be seen, but sometimes it makes for some good news.

Last Wednesday, the 22nd, someone asked Diplo what he didn’t like about the growing EDM scene. 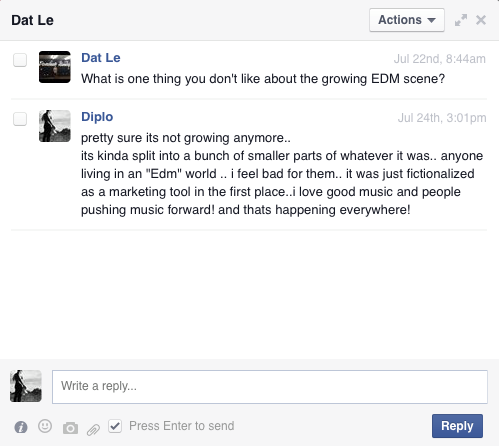 In a certain way, he’s right. “EDM” has definitely branched into its own smaller communities, though EDM still holds them all under its vast umbrella. And absolutely, it was made as a marketing tool – there’s no doubt in anyone’s mind about that. It’s much easier to market a product if you can call all of its facets one thing, especially when it’s an acronym (the public loves acronyms).

And Diplo’s right about music, too! Just look at Australia and South Africa, they’re booming.

So if you were coming to see us bash against Diplo, sorry. We’re totally with him on this one.