Heads up, bass fiends and crunk junkies: the Carnival is coming to town! And not just any carnival either… this is to be a musical affair filled with all manor of weird treats and freakish delights. You should expect no less when Camp Question Mark hosts a party, and they’ve outdone themselves this time. This Friday (August 7th), the crew is bringing a slice of Burning Man‘s infamous playa vibes to the Bay Area for what can only be referred to as a fund-rager. With a stacked lineup of musical guides including UZ, AWE, and Trevor Kelly, the night is sure to pop off harder than a pressurized bottle cap. Plus! The whole shindig is going down in a surreal haunted church that’s been renovated into a working theater; is your spine tingling yet?

If not, it’s about to be. The mysterious duo known only as um.. will be making their Bay Area debut at the Carnival. These two have some of the most innovative and balls-to-the-wall strange production techniques in the scene right now; needless to say, we can’t wait to see what they have in store. Given that you probably can’t either, you should definitely check out our exclusive interview while you listen to their latest release. Read on for the full conversation, as well as more info on Camp Q‘s latest party! 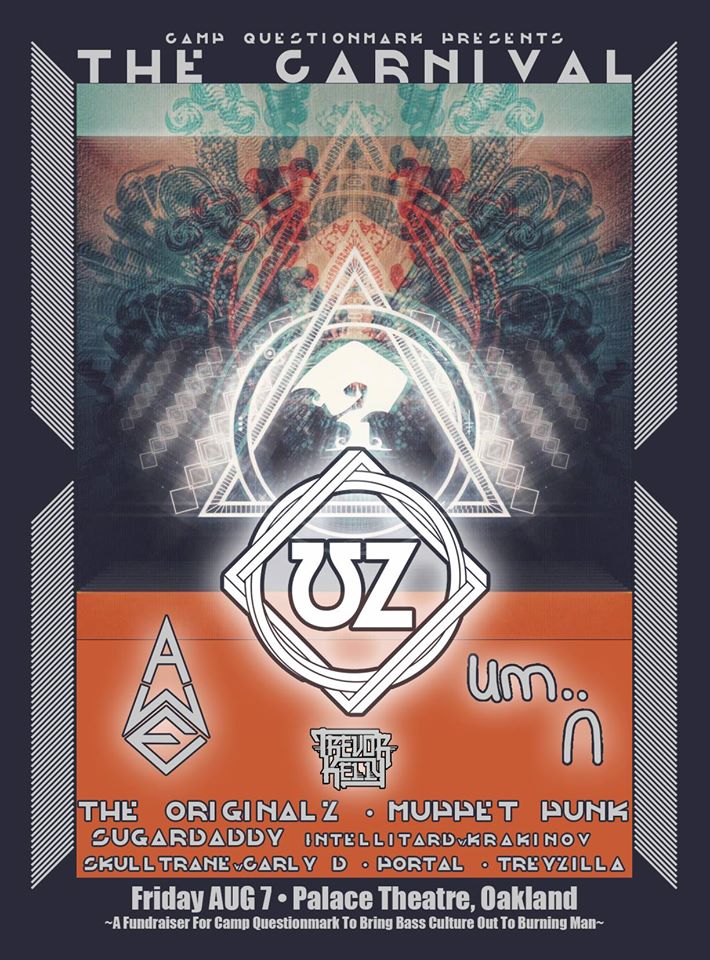 First, a bit of background: um.. consists of two Icon Collective graduates, Dylan Gold and Ben Bruce, who met while at school and started making music together in September 2014. Making music comes easy to the two who share a belief that there is a creative void in the electronic music space their project can fill. Their first introduction to the public came in December 2014, with their remix of much-hyped producer AWE‘s “Griffin” being included in LA powerhouse collective Team Supreme’s Vol.127 beat cypher. Since then, um.. has released their debut EP, Pay Attention, via New York based label Study Group, as well as collaborating with LA based collective Shifty Rhythms where their track “skrillex” was featured on the Vol 3 Compilation. Though the year has been busy, they are already gearing up for more shows across the US and beyond in 2015.

How are you feeling about your Bay Area debut and playing for a major Burning Man camp?

Ben: I’m stoked! I grew up in the Bay Area so it’s really awesome to be able to go back there and play for old homies. Camp Question Mark is awesome for putting us up like this. We are very grateful and happy to help them raise some money for Burning Man!

Dylan: I’m definitely looking forward to it. I haven’t been up to the Bay since I was very young, so I’m just happy to check it out again. As far as the show goes, I think that this is the most excited I’ve been to play anywhere. I’m also just looking forward to meeting the Camp Question Mark family and getting to know some new people. It’s going to be a good time.

Tell us a little about your background with music; how did you become producers?

Ben: I’ve been producing music since early high school. The idea of being to make a whole song by myself is really what turned me on to it since I was playing bass guitar in bands at the time. I also majored in Electronic Production & Design at Berklee College of Music and then went on to attend The Icon Collective where I met Dylan.

Dylan: I started getting heavily into electronic music in 2010 after listening to dubstep for a while. I didn’t know anything about music so I started DJ’ing for a few years until a friend of mine told me to check out Icon. I didn’t really start producing until I went there and that was about 2 years ago now.

What was the first piece of electronic music you ever heard? Did you love it or hate it?

Ben: Probably ‘Sandstorm’ or something. It was hype as fuck to be honest.

Dylan: I think I heard ‘Satisfaction’ or something when it came out. I wasn’t a big fan, and electronic music didn’t really interest me at the time.

How did you decide to go by ‘um..’? Did you go by anything else before taking that name?

Ben: One day we were sitting around with some friends thinking of silly artist names and that one stuck.

Dylan: What Ben said. We were at City Walk with a bunch of Icon friends.

How would you describe your sound?

Ben: Fun music made out of unusual sounds.

Dylan: Weird and playful. We don’t have the super serious aesthetic that most producers have and I think that’s what stands out.

What does your creative process involve?

Ben: We usually look for random sounds on the internet until we hear one and we’re like, “yeah we could make a song out of that.”

Dylan: Everything is very “flow.” We don’t really plan things out, we just see what happens.

How do you spend your time when you’re not making music?

Ben: I like to meditate and draw and play guitar.

What’s the best thing anyone has told you about your tunes? The worst thing?

Dylan: I remember a comment reading like, “another um.. song that I couldn’t help but listen to all the way through.” That was nice considering how hard it is to sit through any song without skipping over to the drop or whatever. The worst thing is just the general idea that something different is just bad. It’s not ever discouraging though, it’s more like, they don’t get it and that’s cool.

Who are your favorite up & coming artists you think we should keep our eyes out for?

Dylan: If you like dubstep, Krimer is killing it right now. Other than that, just look out for kids coming out of Icon Collective.

See How Much Dance Music’s Top DJs Generate On Tour

Calvin Harris Releases Music Video For “How Deep Is Your Love”

Calvin Harris Releases Music Video For "How Deep Is Your Love"