Teen Shares Coma Photo Warning Others Against Drug Use At Festivals

One of the most debated topics in EDM is the prevalence of drug culture and how it reflects in the image of our scene as interpreted by mainstream media. Although here at Your EDM we choose to encourage awareness and safety through the promotion of safe-use organizations like the Bunk Police & Dance Safe, when it comes down to it the best form of prevention is pure and simple abstinence.

One teen wishes to encourage said abstinence through the sharing of his own story after ingesting unknown substances with his friends while at a music festival in the UK. The following picture might be disturbing to some viewers, but it is important to share and make real the dangers of wanton drug usage to our readers. While some might never have considered taking drugs in their lives, it is apparent that some consider it, and others actively use – and we share this in the hope that maybe it will help you reconsider.

19 year-old Jordan Blackburn is his name, and this picture is of himself, while in a medically induced coma, after taking an array of ecstasy tablets while partying at a music festival with his friends. One of his friends, Christian Pay, died as a result. 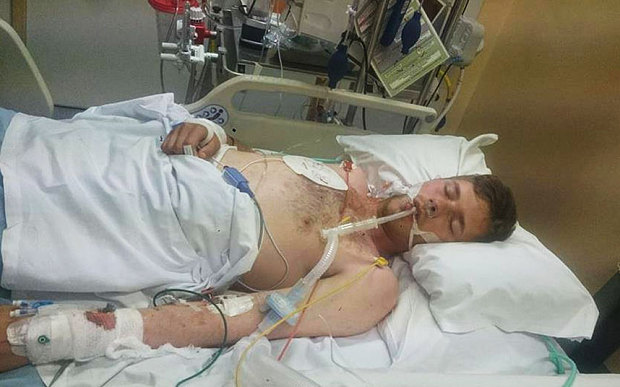 Despite being conscious and on the road to recovery now, Blackburn wants to stress how important it is to never take a risk with your, or your friends lives, by using drugs.

His mother told the BBC…

“He just wants to raise awareness. He was laying in his hospital bed and he just looked and he said, ‘I’ve been given a second chance at life, haven’t I?’ and I said, ‘yes you have.'”