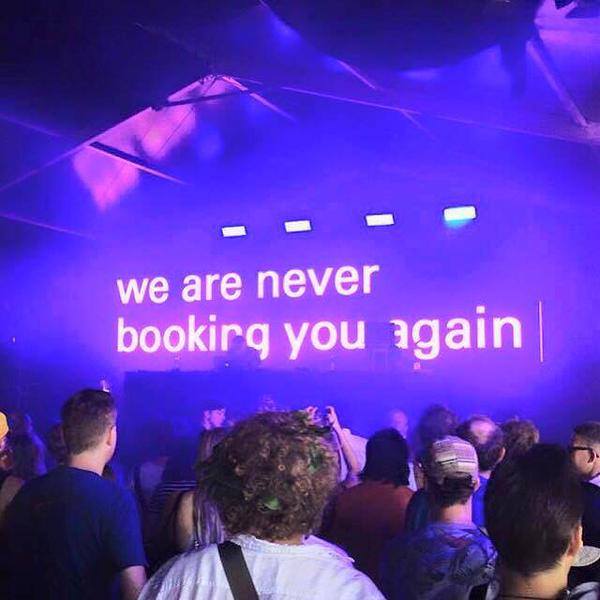 Mystery Photo Identified! Find Out The Story Behind The Rude LED Text

It’s not as glamorous as you might hope, but the mystery behind the picture that went semi-viral yesterday has been solved.

Pictured above, the image reads “We are never booking you again.” First found on Golf Clap’s Facebook page, then AutoErotique’s, and then spreading like absolute wildfire, my timeline was full of shares and posts of this image, asking just what the hell was actually happening.

Through a little detective work and back sleuthing, the image was finally traced to a Twitter account from Mat Dryhurst.

Of all places to overheat my computer- Norway/Oya Festival. Hope to come back and play my intended set sometime 😓

Mat was at this particular event, Oya Festival in Norway, with Holly Herndon. The two are known for writing text messages to the crowd during their sets. During this set, Holly’s computer decided to overheat and the message was written in jest, a way to poke fun at their own misfortune.

So unfortunately, there was no promoter/DJ/venue beef going on here. Just some lighthearted ribbing from the act itself on some unfortunate circumstances.