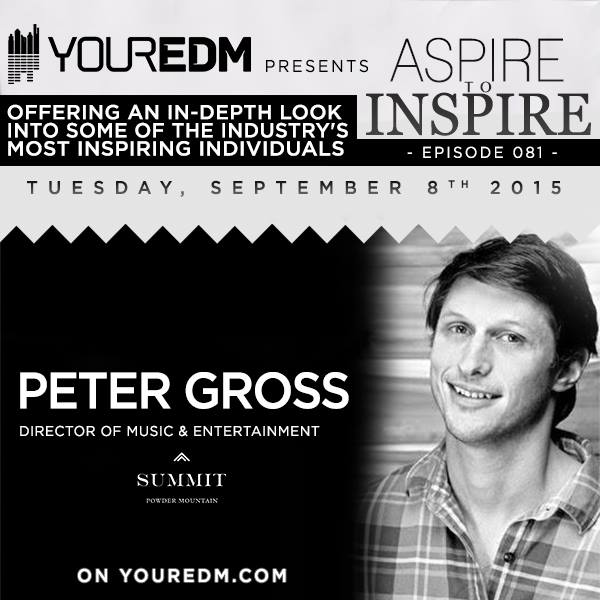 “The challenge or struggle of finding your own path is something that people at a young age sometimes have a hard time doing. They’re figuring out who they are and what they’re into, where it is all going, and which things are important to them.”

In this week’s episode of Your EDM’s Aspire to Inspire series, we had the chance to sit down with Peter (Pete) Gross, Director of Music and Entertainment at Summit Series in Powder Mountain, Utah, to discuss the life of those a bit further behind the curtain.

There are so many young people that find themselves at some form of a crossroads as they enter the real world. Usually, this happens after their formal education comes to an end or something that has been equally important to them changes direction. The same can be said for Pete Gross as he grew up in Boston, Massachusetts. After his camp years came to a close at the age of thirteen, his parents told him that it was time to start working. Reflecting upon that moment, he realizes that starting at such a young age was certainly beneficial to him even though as a kid it may not have looked that way.

“Starting so early definitely helped me find my path, but there were numerous occasions like when I graduated college or later on when I finished projects in my 20’s, where I found myself at this crossroads of ‘well, where do I go now? What do I do next?’ I would wrap up a project and already be looking for the next thing. That’s probably something that a lot of people encounter and for me there have been multiple times in my life where I have faced that decision. There was one time where I had wrapped up a project and had the choice of going back home to Boston and figure things out there, or take a leap of faith by moving to California and digging into the entertainment industry. For me, I ended up doing the latter and that proved to be super beneficial to my career. What I’ve learned from being at that crossroads is just not to get too caught up in the moment and stress out about what the next step is.”

When it comes to life on the other side of that monumental decision, there is a lot of good to look forward to. As Pete progressed throughout his career with different companies, agencies (like WME), and projects, he had opportunities to learn from the best and gain highly valuable experiences that prepared him to tackle the larger projects to come. This of course was complimented by the positive atmosphere found by working so closely with artists on the management side of things along with behind the scenes work curating and producing major events.

“When I was about 25 I started working at WME – a talent agency, I had worked three or four jobs before that which were also in the industry, but this was kind of a big step. The environment of a bigger agency can be a little intimidating in terms of work style and things like that. I ended up working with Marc Geiger who was the head of music there, and that was just a super inspirational opportunity because he’s just such an incredible person that is so intelligent and savvy when it comes to how the industry is evolving. I remember there was one day we were looking over the company’s projections for that year and things like that. I asked him ‘Marc how do you deal with some of the competitors? How do you deal with CAA and some of the others possibly evolving past us?’ his response was ‘well I set goals for my team, and if we accomplish them that’s all I care about. I don’t need to worry about anyone else. There are always going to be competitors doing different things and taking different shares of the marketplace, but as long as you’re evolving and meeting your goals, that’s something you can solely focus on and not worry about anyone else.’ Seeing how he operated in that capacity was definitely inspirational.”

There is definitely a lot to be said about the lessons Pete Gross learned from Marc. Aside from the business setting that they were in, it can relate to anything we face as young people who are trying to get the wheels turning in our professional careers. There will always be competitors, there will always be progress around us, but as long as we push forward to the goals that we set for ourselves, that is all that really matters. Comparing ourselves and worrying about the person next to us may not be the smartest way to get ahead.

That being said, every person has their own way of achieving their goals of course. Each person has their own path. As Pete puts it, we are constantly finding our own way as we grow up and work through our careers, and learning is the most important part. For him, the early post-college years were more of an introduction to the industry and learning about how it all works. From then until about 25, he stepped away from the music industry to work on other projects and discover what interested him the most. He eventually returned in his late twenties and jumped deeper into the realm of management and production. Even now, at the age of 30, Gross sees himself changing and evolving.

“I’m still figuring it out now as I go. I think that’s what your 20’s are all about; setting yourself up, working, getting some good experience, and being able to decipher what it is that you’re really interested in.”

Even though Gross sees himself constantly perfecting his career path and following what he sees as the next best project, the one goal he has had in mind remains untouched – the goal to create a multifaceted platform that is comprised of everything that makes music industry function as the well-oil machine that it is. In doing so, people all over the world will be able to access music in the same way- opening a worldwide connection between each and every one of us.

“I think music is such an interesting and unique thing because it’s, as many people put it, a universal language. It’s something that everyone can share no matter where they are, so I think we are in an age where areas and regions in the world are continuing to progress and evolve their capacity to have that digital availability. To be able to expand that concept to the rest of the world is a really interesting thing. A change that may not be happening right now but will develop over the course of the next few decades will be the ability to garner that content and have that digital availability no matter where you are in the world so people in Africa or Asia or South America or wherever, will have the same opportunities to reach that content and share music with the rest of the world. I think that goes into why artists are so big in some parts of the world and not in others. It can get to a point where everyone has that access to music. That will eventually change how touring works and offers from labels, and many different things. It will be interesting to see how that evolves year after year and see how it affects everything.”